5 monstrous cars that have riveted all the attention in the films. All gentlemen dream of the fourth

Cars often play almost a major role in the movies. The car can be the embodiment of the hero, one of the main locations of the film, and sometimes the main villain. And when it is necessary to show the future in cinema, concept cars are used, which are the pinnacle of technological and visual developments of car manufacturers.

In 1971, Stanley Kubrick directed a film based on Anthony Burgess’s dystopian novel A Clockwork Orange, set in London of the Future. The budget of the picture was only two million dollars, so they didn’t really think about creating large-scale decorations. Of course, no one was going to order the design of the cars of the future from carmakers either. Fortunately, former Marcos designers, brothers Dennis and Peter Adams, who created the Probe 16 concept car, were not averse to their creation appearing in the film of the legendary director. True, in “A Clockwork Orange” the car is called Durango 95. 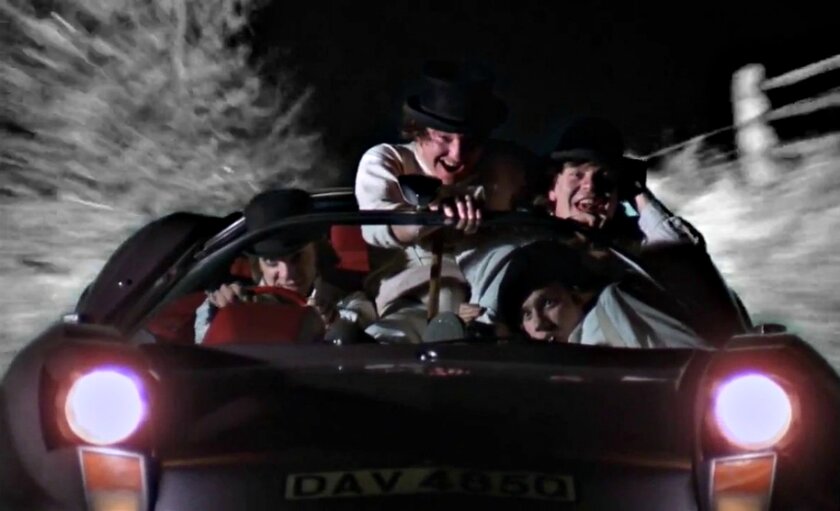 The Probe 16 is based on a BMC Austin 1800 four-cylinder piston engine in 1969. At that time (as, indeed, now) it was one of the lowest cars in the world: its body height is only 86 centimeters. Access to the bright orange interior, where there are only two seats, was only possible through a sliding glass roof. Despite the success and iconic status of the film, the Probe 16 remains a concept car. A total of three such cars were assembled, and all of them are still in working order. In 2004, Probe 16 appeared on Top Gear. 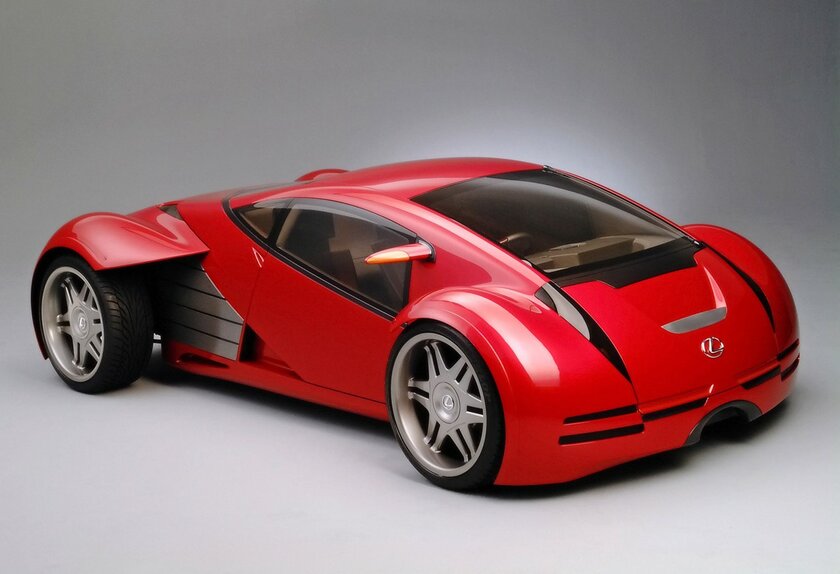 Steven Spielberg’s Minority Report is set in 2054. A group of forecasting experts was assembled specifically to create an image of the future in the picture. Artist Harald Belker of Lexus Design Studio has developed several concept cars. Chief among them was the red sports two-seater Lexus 2054. The car in the film has an autopilot, head-up displays, gesture and voice control functions, a night vision camera, an automatic repair system and many other chips. The Lexus 2054 was also intended to be an electric car, but in 2002, an electric sports car was a fantasy in itself. 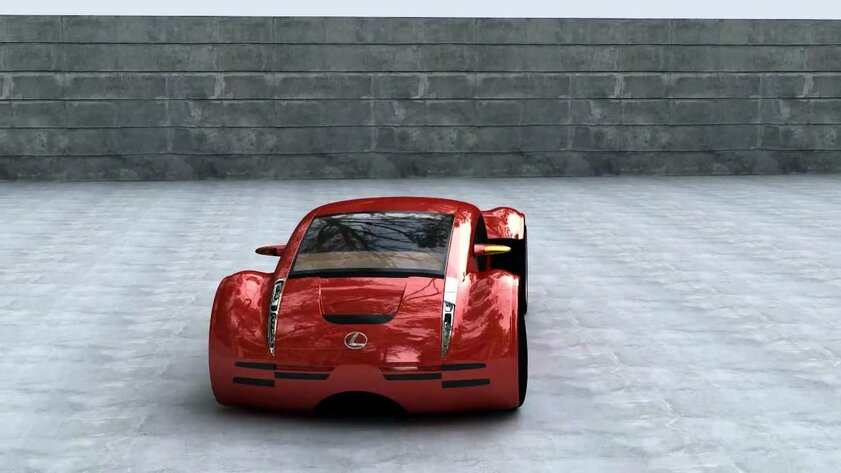 Therefore, a 2.7-liter V6 petrol unit from Porsche was used as the engine, which was located at the rear of the car. And in front of the car is the luggage compartment. Like many cars from science fiction films, the Lexus 2054 hasn’t gone further than a concept car either. In total, four of these cars were assembled. Interestingly, one of them later starred in another science fiction film. In 2005, Michael Bay’s The Island featured a blue Lexus 2054. The Cadillac Cien concept sports car can also be seen there. 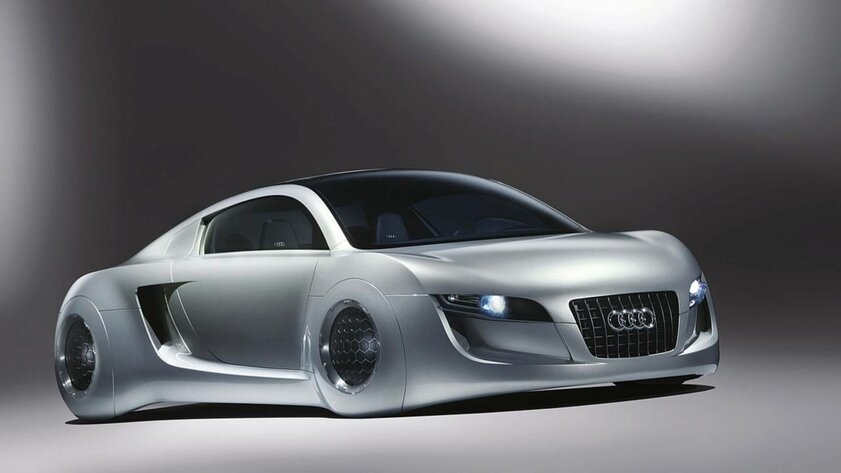 Unlike the previous heroes of this list, which were created and remained only concepts, and from cars like the fifth generation Chevrolet Camaro, which appeared in the film “Transformers” as a concept car, and then became serial, the Audi RSQ from “I, Robot” a completely different story. In 2003, the German carmaker presented the concept sports car Audi Le Mans quattro in honor of the three-time series of victories at the 24 Hours of Le Mans. After several exhibitions, he, like many other concept cars, could go to the museum. However, the car was so good that Audi decided to advertise well with it. 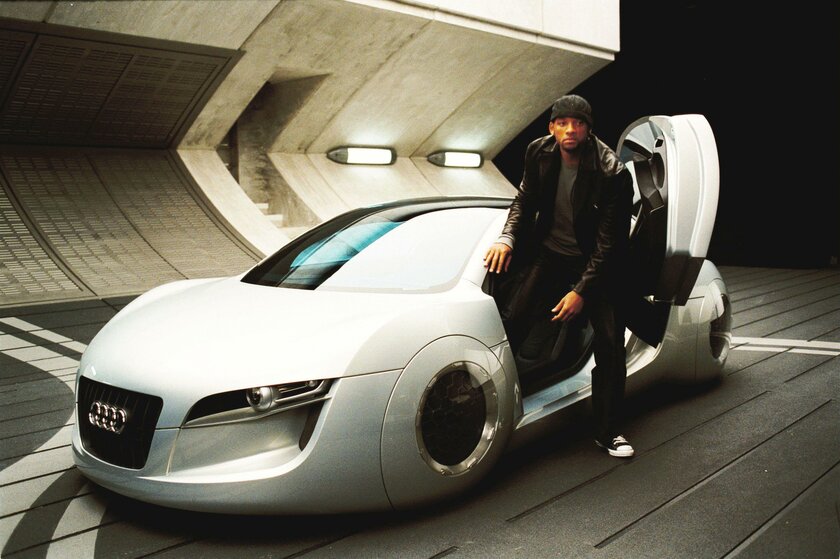 The first stage of this campaign was the participation in the science fiction film “I, a Robot” based on the stories of Isaac Asimov with Will Smith in the title role. True, the car had to be very much altered. Therefore, another concept emerged from the Le Mans quattro concept – the Audi RSQ. Among the recognizable elements, only the branded radiator grill remained. The wheels were covered with plugs, an MMI media center was installed in the cabin, and the doors were converted into “butterfly wings in reverse”. As a result, the car became one of the main adornments of the film. Further, the Audi Le Mans quattro appeared as the final boss in Need for Speed: Carbon. It was eventually released as a production car called the Audi R8. RSQ is still a concept. 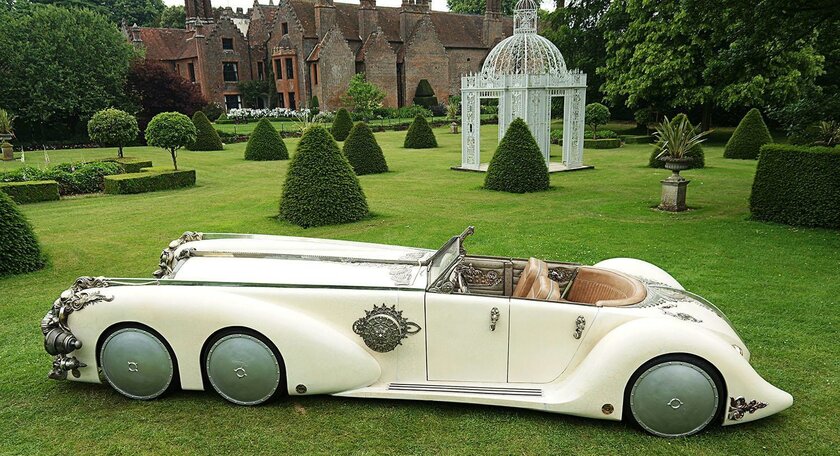 The League of Extraordinary Gentlemen describes the past, not the future. Nevertheless, it is in this film that one of the most striking concept cars in history can be found, assembled especially for filming. We are talking about a six-wheeled convertible “Nautilus”, the owner of which was Captain Nemo himself. Its length is 6.7 meters, width – 2.74 meters, and the diameter of each of the six wheels is 24 inches. Victorian metal figures sculpted throughout the body by Carol Speer (the film’s production designer), and the interior is upholstered in beige leather. This handsome man was created on the basis of one of the Land Rover models with a V8 engine. 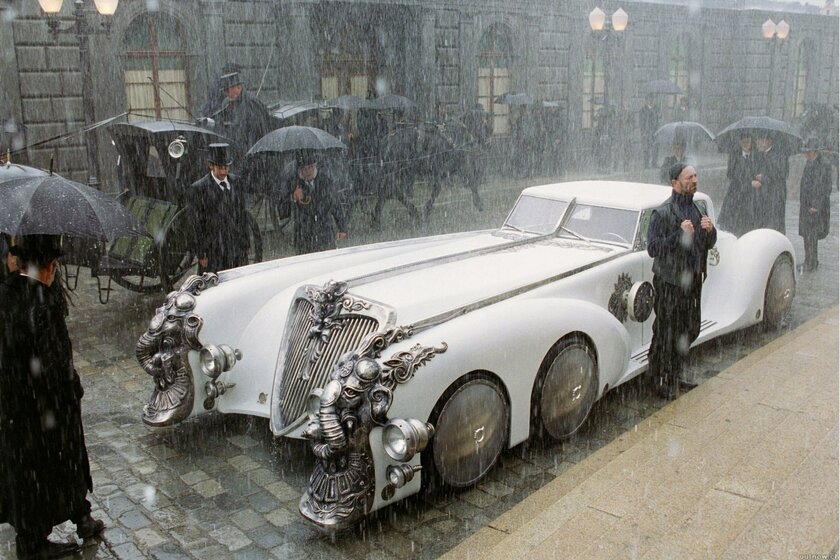 Interestingly, unlike many fake cars created for films, this colossus can actually drive. Moreover, “Nautilus” can accelerate to 150-160 km / h. Also, due to the very low fit, it was equipped with a special hydraulic system that allows it to be safely unloaded from the truck. Even during filming, the car began to promote the tape, appearing at popular auto shows (in Essen, Germany and in the steampunk capital of London). After the release of The League of Extraordinary Gentlemen, it was placed in the Prop Store’s showroom, where it is kept to this day. 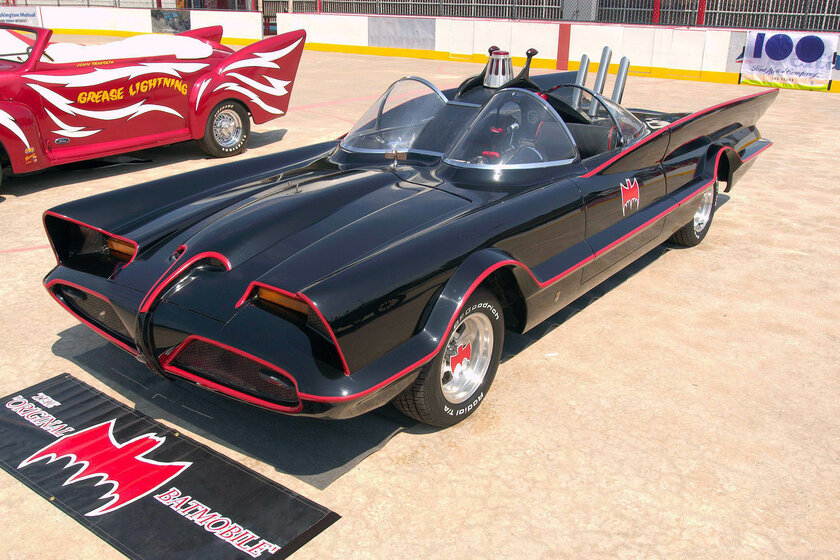 One of the main wealthy of the DC comic book universe is Bruce Wayne, who cleans the streets of Gotham from crime in a Batman costume. Possessing a huge fortune, he can afford to create the most technologically advanced devices and vehicles. For example, in the TV series of the 60s, the superhero car was created in the image of Bond cars. The filmmakers took the Lincoln Futura concept car and added all sorts of high-tech chips, as well as various external body kits. The result is an even more conceptual car. Over time, the creators of the Batmobile design began to go further and further. 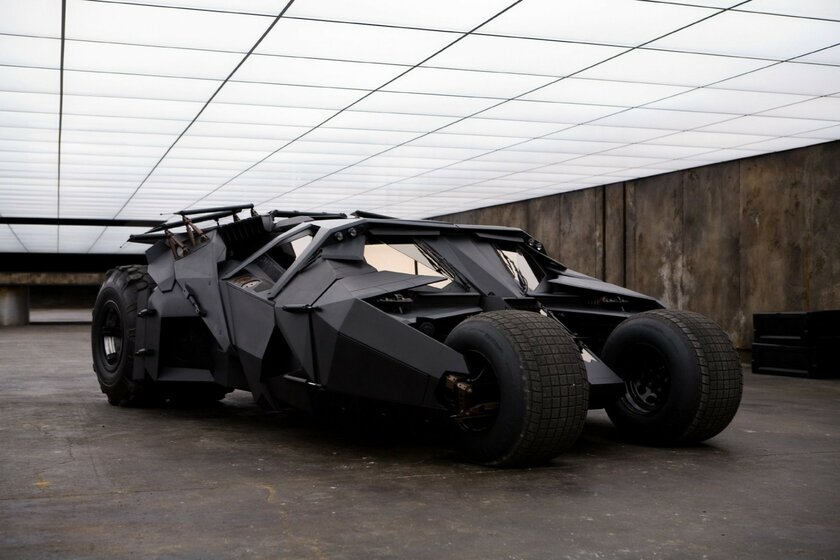 In the Tim Burton films, Batman drives a long and narrow black two-seater. It was designed on the basis of the Chevrolet Caprice, but only the chassis remains from the original car. Everything else is the imagination of the creators. Christopher Nolan wanted to abandon the Batmobile altogether, as he thought over his story from the point of view of maximum realism. However, the studio insisted on the need for the car to appear in the film. Therefore, for Batman, they came up with that tank on wheels from scratch. According to the film, the Batmobile is an Acrobat military vehicle designed for water crossings. It has a 5.7-liter engine producing 340 hp. with., length – 4.5 meters, width – 3 meters, height – 1.5 meters, six large wheels, like the cars “monster truck”. He is also equipped with weapons and is practically impenetrable. 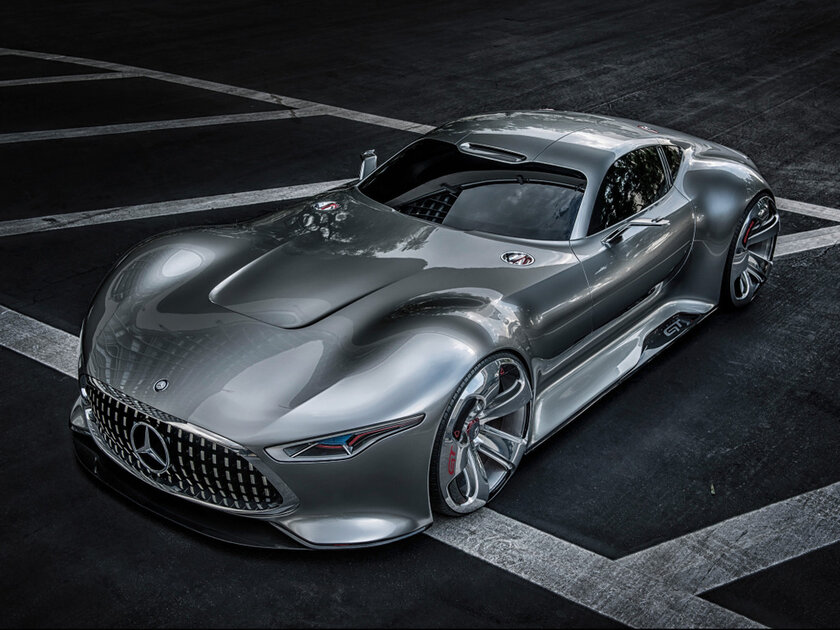 In the new DC MCU movies, Ben Affleck also has his own Batmobile, which, on the one hand, has weapons and armor like Bale’s “tank”, and on the other, looks more sporty and futuristic. And in the “Justice League” there was another concept car. After all, Batman’s main superpower is still money. This means that he can not only build combat vehicles, but also buy expensive vehicles. Therefore, the civilian car of the superhero in the film was the Mercedes-Benz AMG Vision Gran Turismo, originally developed virtually for the computer game Gran Turismo 6, and then assembled as a full-fledged concept car.

The signal from the 5Y5Y inflation measures is not worrisome

Activity in the bitcoin network has noticeably decreased

Derek Black Jul 4, 2022 0
With winds gusting to 130 kilometers per hour and violent gusts, Tropical Storm Bonnie turned into a typhoon…

Jul 4, 2022
Many have been moved by a video from Australia in which the daughter gives to father her, who is dying in the…

Stem cells from umbilical cord: when it is possible to keep them

Jul 4, 2022
There stem cell conservation from umbilical cord has become a topic of great interest in recent years. The…
Prev Next 1 of 15,501
More Stories