Europe has just had one of the hottest summers, with temperatures well above the seasonal average. In the past, the torrid climate and the great torrential rains were associated in the common imagination to the Tropics, close to the Equator, considered distant and mythical places, described in adventure sagas and exotic novels.

The climatic upheavals which are intensifying and extending all over the world, now represent such a serious and dramatic problem that it requires a serious reflection on the strategies and the operational tools to be put in place quickly to counteract its most devastating effects and to create the conditions for an inversion of all those phenomena that in recent decades have changed the environmental balance in such a radical and widespread way.

To give examples that give a clear idea of ​​the gravity of the situation in which we find ourselves, it is enough to remember that in the current year, in the hottest place on Earth, the Death Valley, California, the temperature has exceeded + 50 ° C, the highest ever; in contrast, the Arctic is warming 3 to 4 times faster than the rest of the planet, as its sea ice melts from sudden heat waves, which also reach the north pole.

On August 14, 2021, for the first time in history, al Summit Station in Groenlandia at an altitude of 3,200 meters, rain and no snow fell. In August, in Hallormsstadhur, Iceland, the new national heat record was recorded with a + 29.4 ° C. LNorway has just had its hottest September in history, with + 28.6 ° C, the previous record had lasted for over 100 years.

These phenomena may appear to be mere statistical curiosities, instead they represent the extreme peaks of a climate change that is negatively transforming the life, health and economy of most of the countries of the world, causing severe floods. devastating fires, droughts, famines and migration. To report this situation is the latest UN report from the IPCC (Intergovernmental Panel on Climate Change). The data that emerged, in fact, show that human influence on climate change “is unequivocal and unprecedented” and that if the zero emissions target is not reached by 2050, the point of no return will be reached. 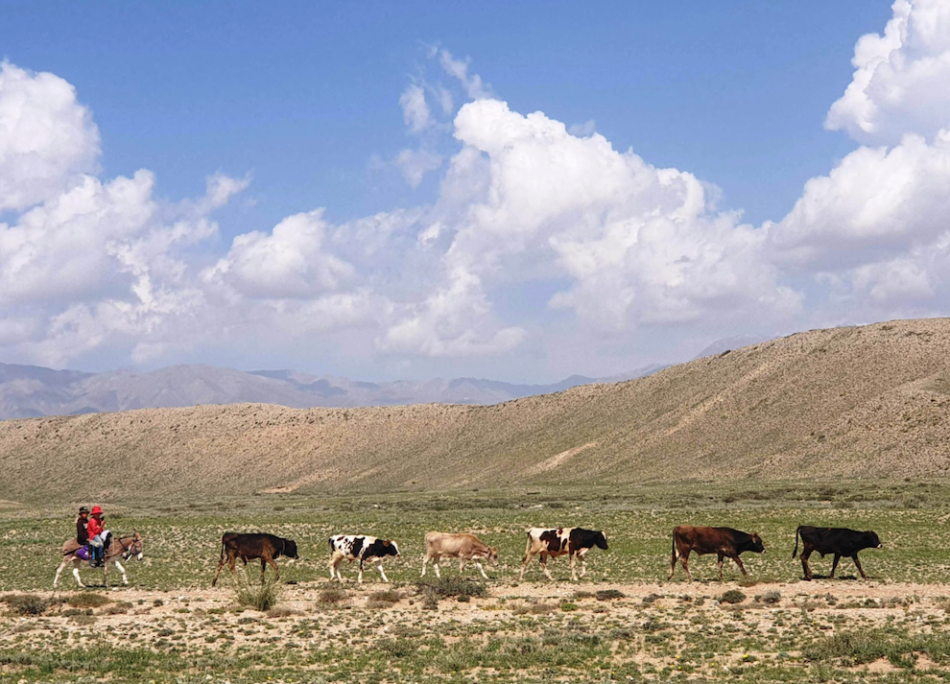 As recently pointed out by the United Nations Special Rapporteur on Extreme Poverty, global warming that causes climate change also has a great impact on human rights: mainly on the right to life, health, housing, water and sanitation. sanitary.

The climate has already changed, the earth is burning, and the climate emergency now affects every region of the planet. Currently, as a sustainable development expert, bearing in mind the urgent priorities set out in the UN report, I am working with ILRI International Livestock Research Institute (World Research Center on Agriculture and Pastoralism) to monitor and document also through the editorial staff of an atlas, biodiversity in the world, climate change, and in particular the goals achieved by international programs for the implementation of a sustainable development of pastoralism.

In Kyrgyz Republic, where I recently went with an ILRI work team, the increase in temperatures is leading to more frequent and intense extreme events, with very alarming effects for local populations, such as drought, an unpredictable seasonal climate and an increasing number of natural disasters: landslides, mudslides and avalanches in mountain areas, which cause loss of life and poverty.

For countries like Kyrgyzstan, where more than half of the total area is grazed by its 1.7 million cattle and 6.3 million sheep and goats, climate change negatively affects the country’s key economic sectors, such as agriculture and energy. During my recent trip, I got to observe and study an important project that is supporting the government of Kyrgyzstan in its ambitious goal to refine its commitments to reduce coal production and keep the increase in global warming within 1.5 -2 degrees Celsius.

In particular, to limit future emissions by adapting to climate change, the Association Kyrgyz Jayity, with the support of FAO and of IFAD, is collaborating with the government to implement a project that brings significant changes to the livestock sector development programs and that introduce an innovative method in the creation of an artificial glacier, which will be placed a short distance from irrigated areas, near small and medium-sized natural water streams.

Pasture Users Association engineers have developed an easy-to-implement, cost-effective and effective method of conserving irrigation water. The criterion is to build in arid areas, using artificial reservoirs like the one already mentioned, engineering structures, capable of easily transporting water from natural sources for short distances, thus collecting precious water resources in the autumn-winter period to be used later in spring and summer.

The realization of these projects, in addition to being a practical way to adapt to climate change, allows villagers located along natural water basins and riverbeds to satisfactorily solve what was becoming a dramatic survival problem for them. . Since the use of artificial water tanks is convenient and simple in implementation, and represents a tool to mitigate the effects of climate change in mountain regions, the projects underway in Kyrgyzstan are also being applied in other countries, such as Nepal and India.

Specifically, all that is needed to build an artificial reservoir is the installation of an underground pipeline, at a distance of 2-3 km from the source, with natural water acting according to the principle of “gravity” and a vertical pipe about 15-20 meters. The attractiveness of this method consists, in addition to the simplicity of the project and the low costs for its implementation, in the possibility of implementing it almost anywhere without particular difficulties. Furthermore, they can be implemented in a planned and sustainable way, and contribute to developing the spirit of solidarity collaboration and building a conscious global community, for a future of better management, responsibility and care for the environment.

Climate change poses a significant challenge to achieving the Sustainable Development Goals Agenda 2030, Goal 13, and, therefore, it is of the utmost urgency to act on the climate with a strong reduction of greenhouse gas emissions and with incisive policies to adapt to climate impacts.

In fact, the future scenarios regarding the climate trend are very worrying and more and more citizens are asking for a coordinated commitment worldwide to create as soon as possible the conditions that lead to a significant inversion of the current trend, especially in those countries where more the ability to generate pollution is high.

In the last few years, Greta’s silent protest Thunberg and the initiatives of the movement Fridays for Future, of which Thumberg was a promoter, have placed the problem of the future of the new generations at the center of the debate on the climate, strengthening the most determined component of the environmental movement in reiterating the need to accelerate and intensify the commitment to the defense of environmental balances. This is a precedent that bodes well for the future.

Why DSLRs are already dying out, or how the camera industry is changing

HDD 30 TB in a couple of years. Seagate is working on second generation HAMR drives

May 25, 2022
What child does not like to go to the toy store? Almost all of them enjoy going to these stores, as they know that…

May 25, 2022
Before long - well calm down the riot he caused with his statements how Vladimir Putin attempted assassination,…

Matthew McConaughey speaks out after massacre in his hometown of…

The Måneskin nominated “character of the year”…

Don Matteo 13: the grand finale will reveal the secrets of…