AI instead of a psychologist and an airship for the Arctic: Russian inventions in August

In August, Russian scientists developed an aircraft to work in hard-to-reach regions of the country, synthesized new types of optical fiber and glass with increased resistance to radiation, presented a prototype of a motorized sports surfboard, as well as an artificial intelligence system capable of reading the psychological and emotional state of students and issuing recommendations for teachers.

💡 This is a material from the “Made in Russia 🇬🇺” cycle, which describes the main domestic inventions, as well as important events in various fields of science and industry in Russia.

Created an optical fiber that can work in space

Ekaterinburg has developed and manufactured infrared optical fibers that are resistant to ultra-high doses of radiation. Due to the increased radiation resistance, the material can be used not only in traditional optoelectronics, but also in laser surgery, endoscopic and diagnostic medicine, the space industry (for example, to create orbital infrared telescopes), as well as at nuclear industry facilities.

To create a new material, the staff of the Ural Federal University (UrFU) first applied computer simulation methods to determine the optimal conditions for manufacturing fibers from available single crystals. The single crystals of silver bromide and iodide AgBr–AgI obtained by specialists from Ural Federal University were taken as the basis. It is the presence of iodine anions in the crystal lattice of silver bromide that determined the additional photo- and radiation resistance of the fibers, and also expanded the range of infrared radiation transmission by them, which ranges from 3 to 25 microns. In this case, optical losses are at extremely low values. Interestingly, the transparency of the fibers was 70–75% (theoretically, the maximum possible value for the AgBr–AgI system). The resulting optical fiber is capable of receiving and transmitting the radiation of space objects and can be used, for example, in infrared telescopes instead of massive mirrors.

Developed an airship for arctic conditions 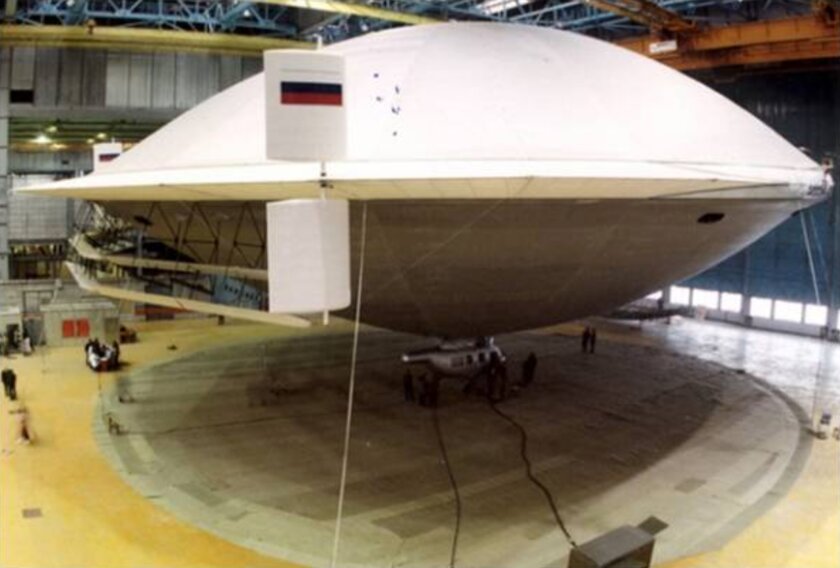 The Moscow Aviation Institute (MAI) has developed an aerostatic hybrid solar-powered aircraft “Ekodisolar”, which can be used to solve logistical and infrastructural problems for transporting goods and conducting search and rescue operations, including in the Arctic and other hard-to-reach regions Russia. Most of all, it resembles an airship, as it uses lifting (floating) force, which, unlike conventional drones, saves energy for vertical movements. However, the airship is not capable of landing on the ground, and domestic “Arctic plans” are deprived of this drawback. The body of the device is made of durable gas-tight thin elastic materials in the form of two hemispheres, closed on a composite hoop, which is filled with helium and non-flammable hydrogen.

A unique technological solution is also the use of both conventional propulsion engines (TVD) for feeding thermal volumes, and highly efficient traction rotary electric motors along the disk contour with additional power supply of the apparatus electrical system from surface solar film batteries. Unlike conventional airships, the development of the MAI has a gyroscopic stabilization system, which allows it to be used for flights at speeds up to 130 km/h. Scientists believe that such devices have incredible potential in the future. For example, now throughout the country there are a huge number of discovered mineral deposits that are not being developed due to complex logistics and unprofitability. Instead of the cost of creating roads through swamps, rivers and mountains, you can use Ecodisolar.

We made a prototype of a high-speed motosurf 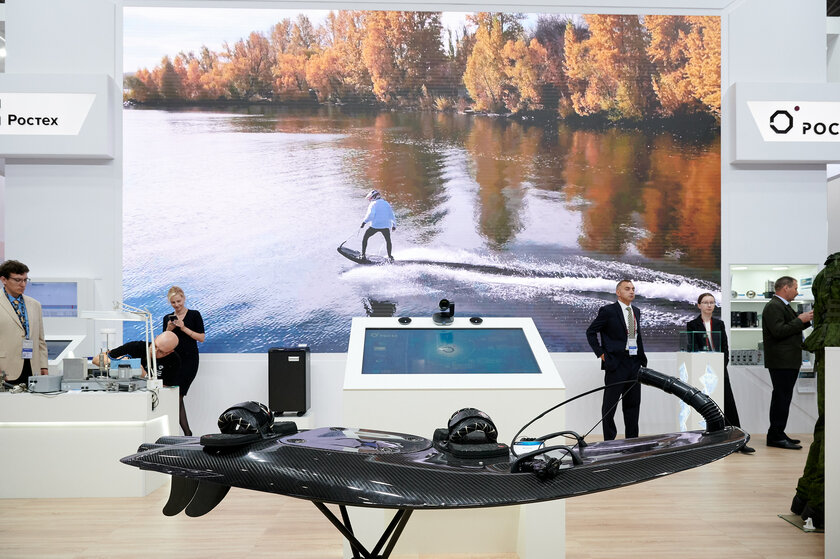 Motosurf at the presentation | Rostec

Rostec presented a prototype of a motorized sports surfboard, which is in no way inferior to the best foreign analogues, and even outperforms its competitors in terms of price and availability. The device should enter the market by the spring of 2023, and then an electrical modification will appear.

The world market of sports motorboards for speed surfing is now in a phase of active growth and is increasing annually by at least 10%. At the moment, the main players are the Czech Republic, the UK, China and Korea. Ruselectronics holding (part of Rostec) presented in August a prototype of a domestic motosurf. The device is a carbon fiber board equipped with a 100 cc internal combustion engine, a water jet, and a quarter-wave resonator that functions as an exhaust system. Motosurf is capable of accelerating up to 55 kilometers per hour, and the power reserve with a full tank is 60 minutes. In this case, the weight of the board does not exceed 20 kilograms. The device has excellent maneuverability, allows you to make short turns with minimal loss of speed and jumps.

Introduced an AI system capable of recognizing an emotional state 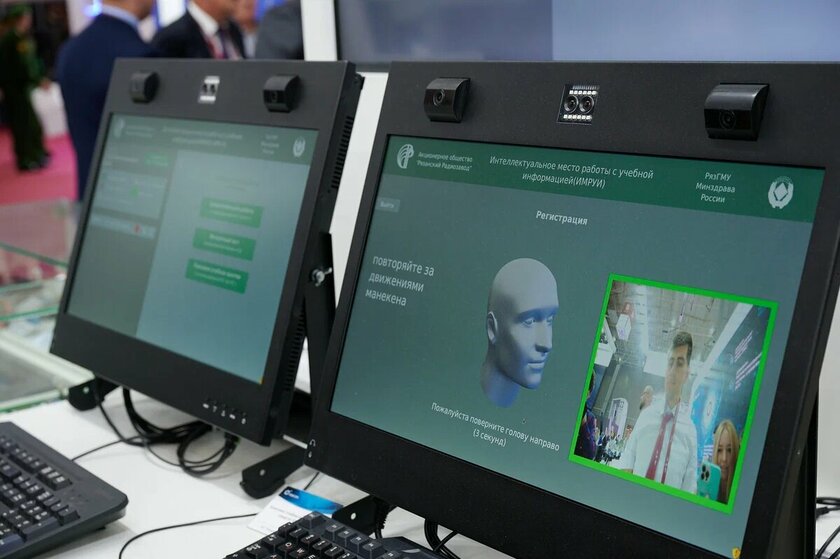 Teachers cannot always effectively track how much their material is interesting to students, how well it is absorbed by them and who needs a more individual approach. Therefore, Rostec specialists have created a special workspace with artificial intelligence, which evaluates the psychological and emotional state of students and issues recommendations for further work.

Ruselectronics holding (part of Rostec) presented an intelligent workspace with educational information (IMRUI) equipped with artificial intelligence systems. The device is a monitor with cameras and special training software. After the student passes the primary testing, the complex remembers his appearance, receives data on the psychophysical structure of his personality and emotional state. At this time, the artificial intelligence system reads and recognizes the psychological and emotional state of the student, evaluates the quality and speed of mastering the material, and, based on the data obtained, generates recommendations for the teacher on drawing up an individual learning trajectory for each student and on finalizing the educational material.

AI will help determine which part of the program is most interesting, which needs to be improved, which of the students needs help, and so on. A face recognition system is used to enter your personal account. You can work with the device both in the old fashioned way using the keyboard and mouse, and with the help of gestures.

Solved one of the fundamental problems of superconductivity

Skoltech was able to experimentally observe one of the fundamental physical phenomena, which until now has been described only in the form of a theory, which in itself is a very rare event. Thanks to this, it will be possible to refine the quantum value of the ampere, create new types of instruments for fundamental scientific research, and so on.

Scientists from the Skolkovo Institute of Science and Technology, together with colleagues from European scientific organizations, were able to experimentally demonstrate the non-stationary effect of phase slip. It manifests itself in the form of the formation of steps of an electric current flowing through superconducting nanowires (thin films of niobium nitride) under the action of microwave radiation. A nanowire made of a superconductor plays the role of a tunneling barrier for magnetic flux quanta in the same way that a Josephson junction, a thin layer of insulator between two superconductors, serves as a tunneling barrier for electric charges. Electric current, according to the classical laws of physics, cannot pass through such a transition. That is, a chain break must occur. However, the quantum mechanical tunneling effect allows current to flow through such gaps without any resistance. 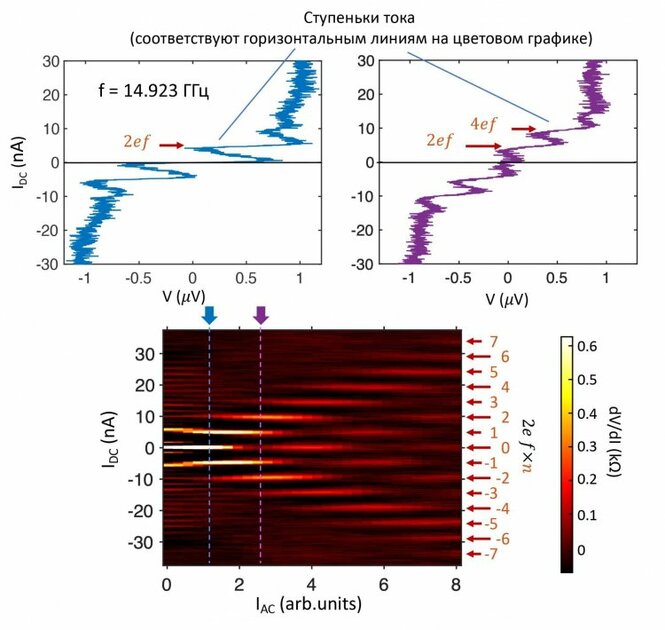 Volt-ampere characteristics under the action of microwave radiation | Skoltech

Based on Josephson junctions, supersensitive magnetic field detectors are made, for example, to study very weak magnetic fields of the brain. Interestingly, under the action of microwave radiation, the current begins to flow not smoothly, but to form voltage steps (Shapiro steps). The volt standard is just not measured, but calculated based on Josephson contacts. Similarly, a magnetic flux cannot overcome a nanowire in classical physics, but according to the laws of quantum mechanics, theoretically it should. Scientists from Skoltech managed to observe the non-stationary phase slip effect, which manifests itself in the form of reverse Shapiro steps in superconducting nanowires. Based on this effect, it will be possible to calculate the quantum standard of the ampere, because it does not depend on either the material or the external conditions. 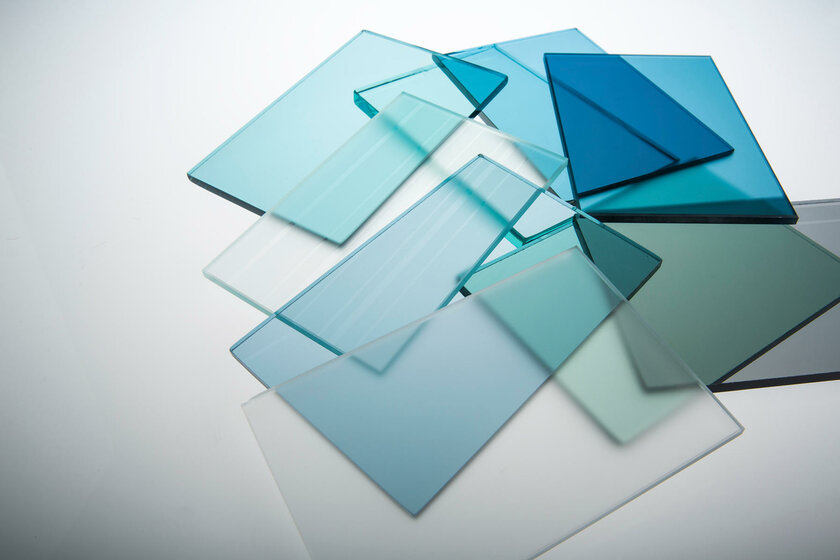 Glassy systems are used in many areas of human activity. They have low melting and softening points, high infrared transparency, high density, high refractive indices, and so on. Therefore, they are used to create solid-state lasers, as heat insulators, optical filters, and even radiation shielding materials. Russian scientists, together with colleagues from Germany, Pakistan and Egypt, have created a new type of glass with significantly improved characteristics, especially in the field of radiation resistance. They can be used not only in obvious areas, but also in nuclear medicine, for the production of space suits for astronauts, the creation of spacecraft, and so on.

Boron glass is one of the best known and highest quality systems. Physicists from the Ural Federal University (UrFU), together with foreign colleagues, were able to synthesize new boron-bariofluoride sodium-calcium-nickel glasses with outstanding radiation protection properties. Thanks to the addition of nickel oxide, all optical characteristics of the initial boronbariofluoride and samples of soda-lime glass obtained from it are improved. The density of glasses increases, the absorption spectrum increases, shifting towards longer radiation wavelengths, the ability of the system to screen photons carrying electromagnetic radiation increases, and a special resistance to gamma radiation appears.

This allows them to be used in optoelectronic and photoelectric devices such as gas sensors, UV photo sensors, photovoltaic cells, photocatalysts, electrochromic devices, as well as for welding masks for protection against ultraviolet radiation, in spacesuits for astronauts, as portholes in spacecraft and even in nuclear medicine to create protective barriers and instruments.

USD/JPY Price Analysis: Falls 200 points after sellers stepped in looking for the 200 DMA around 135.00

GBP/USD Price Analysis: Bulls Watch 1.2350 Closely, But May Give Up Soon