Alco poll: At 11.5 points the difference ND – SYRIZA, KINAL on an upward trajectory

Male Loverdos: Regarding Turkey’s attitude, one must…

The difference between New Democracy and SYRIZA stands at 11.5 points, in the intention to vote in the last poll of the company Alco on behalf of OPEN.

In particular, in the intention to vote on the valid ones, ND leads with a percentage of 32.6%, followed by SYRIZA with 21.1%.


KINAL records a “jump” of four percentage points after the election of Nikos Androulakis in the presidency, with its percentage climbing to 13.6% compared to 9.7% in the previous poll. They are followed by KKE at 5.4%, HELLENIC SOLUTION at 3.6% and MERA at 3.5%. 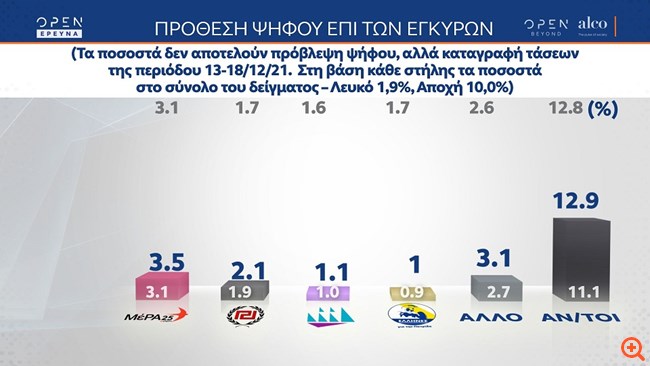 In the question “who do you trust the most as prime minister”, Kyriakos Mitsotakis collects 38%, Alexis Tsipras 23% and “no one” 33%. 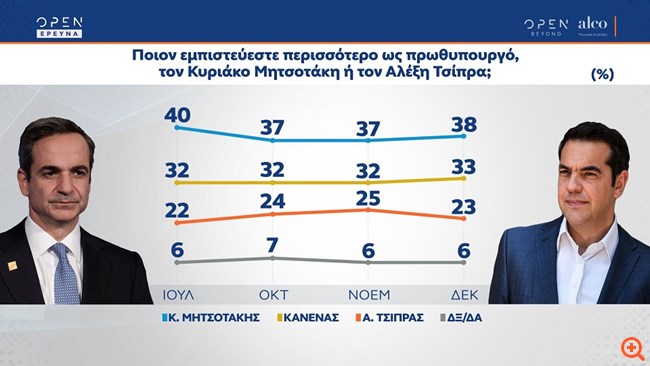 At the same time, the new president of KIN.AL is evaluated positively by the public, with 40% of respondents answering that they have a positive opinion of Nikos Androulakis.

SYRIZA-PS: ‘Someone in the government must immediately collect Mr.…

Ad. Georgiadis responds to the criticism he receives from SYRIZA for…

Italy: The situation with the coronavirus is worsening

Derek Black Jul 1, 2022 0
Cases are increasing in Italy. According to the latest data from the Ministry of Health in Rome and the Italian…

Jul 1, 2022
Freedom in Hong Kong has "disappeared" and China has not kept its promises of 50 years without change, Taiwan's…

Japan: “Burning” by the worst heat wave in 147 years

Jul 1, 2022
The worst heat wave in 147 years still affecting most of the east Japan for the seventh day. In the area around…

Banksy has been named an honorary professor at the University of…

Jul 1, 2022
Street artist, prankster in auctions and now and professor is added to his list of titles Banksy. The University…

Sweden and Finland are about to join NATO. Why this is important and…

Jul 1, 2022
Sweden and Finland are formally ready to end decades of neutrality and join the North Atlantic Treaty…
Prev Next 1 of 15,390
More Stories

G. Katrougalos: The extension of the ND’s stay in…

G. Oikonomou for the impeachment of Papagelopoulos: In…

Briefing of the parties by Nikos Dendias on current foreign…