Alpha Bank presents the evolution of prices in energy products and food in the Weekly Bulletin of Economic Developments that it published today, in an attempt to outline Greece’s dependence on imports, by country of origin, for the specific product categories.

The rise in oil and gas prices, as seen in the graph, has already begun in the spring of 2021, with the rates of change generally going up. In particular, for natural gas, it is noted that the annual increases exceeded 100%, from September 2021, until January 2022. As mentioned above, in February, the increase was slightly milder, however, exceeding the corresponding increase in the HICP. – natural gas, in the EU-27 (42%). In terms of flour and cereals but also in electricity, prices have moved upwards over the last four and five months, respectively, with the annual changes being more pronounced in January and February.

According to the latest data on the trading prices of energy products in international markets, the price of oil exceeded $ 100 per barrel from the end of February onwards – for the first time since September 2014 – reaching $ 115.5 per barrel. barrel on March 22.

At the same time, according to the stock index of the European hub TTF, which is a benchmark for Europe, the price of gas rose to Euro 154.8 per megawatt hour, on average, in the first fortnight of March, which is a historically high price. (Graph 2a). 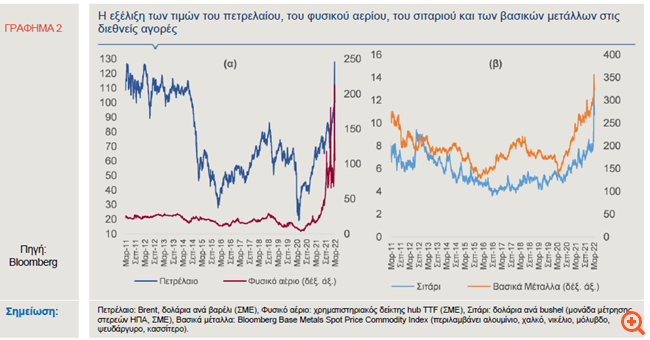 It is noted that, in 2021, the price of natural gas, according to this index, amounted, on average, to Euro 47 per megawatt hour, compared to Euro 9.6 in 2020. Regarding goods, as shown in Graph 2b , the prices recorded for wheat and basic metals, from February onwards, were the highest over time (data from 2011).

Of the total imports of Greece in 2021, about 1/4 related to energy products (16% crude oil, 6% oil refining products and 4% natural gas), 3% basic precious metals and other non-ferrous metals1, while 1% in cereals (excluding rice), legumes and oilseeds.

44% of gas imports came from Russia and 21% from the US, while 63% of crude oil Greece imported last year from Iraq (42%) and Kazakhstan (21%). Imports from Russia accounted for 8% of total crude oil imports, respectively (Chart 3).

The Ukrainian crisis will in the long run lead to a redesign of global supply chains to ensure the geopolitical security and energy independence of the EU. The Russian invasion of Ukraine will change the way the EU supplies energy, in order to eliminate its dependence on Russian gas and oil, by 2027.

According to the REPowerEU Plan, the European Union is expected to immediately resort to alternative sources such as Liquefied Natural Gas (LNG) and suppliers outside Russia, which may create opportunities for Greece by redefining the gateways in its favor. At the same time, in the medium term, the reduction of the use of fossil fuels and the acceleration of the use of renewable energy sources is expected, an area in which our country has a comparative advantage, due to its high average sunshine and geomorphism. In addition, the need for geopolitical security could make Greece a comparatively more attractive investment destination and, as international portfolios adjust, attract foreign direct investment and boost long-term economic growth.

Finally, in terms of cereals, there is a possibility for Greece to turn to alternative markets, while, according to the Ministry of Rural Development and Food, actions are being taken to strengthen crops, e.g. inclusion in the coupled aid for maize and common wheat.

See the whole Bulletin in the right column “Related Files”

Pre-selected at Fies must complete registration until this Wednesday (23)

Kremlin: Sending NATO peacekeepers to Ukraine would be extremely dangerous

AIF: Extend the deadline of 27 May for the transmission of data to myDATA

Museums no longer want to lend historical clothing because of Kim…

May 25, 2022
Kim Kardashian was involved in a great controversy by wearing a historical dress that belonged to Marilyn Monroe at…

Depp testifies for the second time: “No matter what happens, I…

May 25, 2022
Johnny Depp gave evidence to refute statements previously given by witnesses, including Amber Heard stating…
Prev Next 1 of 13,604
More Stories

What was discussed at the Mitsotakis meetings with senior…