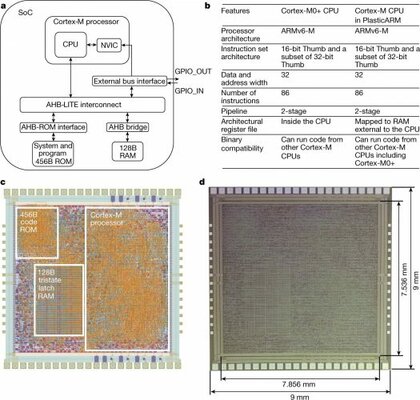 The vast majority of modern microprocessors are made of silicon – therefore, they are quite tough. And if a manufacturer wants to fit this chip into some kind of flexible device, be it a folding smartphone or a wearable gadget, the processor has to be placed in that section of the device that won’t bend. This makes the creation of some breakthrough gadgets impossible, but now, apparently, the situation will change dramatically. The fact is that ARM has just unveiled its newest PlasticARM chip, which is made from plastic and is a flexible processor.

Company officials said PlasticARM is the first full-fledged ARM processor that isn’t made from silicon. Moreover, the first chip of this line was manufactured last fall using the proprietary PragmatIC FlexLogIC technology, and now the new product has been officially presented. The developers of the new processor also noted that the chip made of plastic will be much cheaper than the silicon analogue, while the design flexibility allows the processor to be used in a variety of areas where it was previously impossible to implement. For example, the chip can be used with a foil, plastic, or plain paper backing.

ARM noted that the new chips can be used not only for wearable devices or foldable smartphones, but also in completely different spheres of human life. For example, for packaging food, medicine, wearable medical devices and more.

At the moment, the system-on-a-chip, judging by the characteristics, can perform only fairly simple functions, but this is only the beginning – in the future ARM plans to expand the capabilities of this technology.