ASUS TUF Radeon RX 6800 XT OC review: a good option for those who are ready for it

Despite the monstrous increase in the cost of video cards, some continue to buy them for games. Especially for such desperate (or devoted) readers, we continue to publish reviews of top-end video cards. This article is dedicated to the Radeon RX 6800 XT OC from ASUS TUF line.

The price at the time of publication of the review is 130,000 rubles.

The video card comes in a medium-sized box, painted in black and red colors.

Delivery set is minimal – instructions, adapter. Externally, the TUF RX 6800 XT OC resembles many top-end cards seen earlier. All because of the similar design of the cooling system. 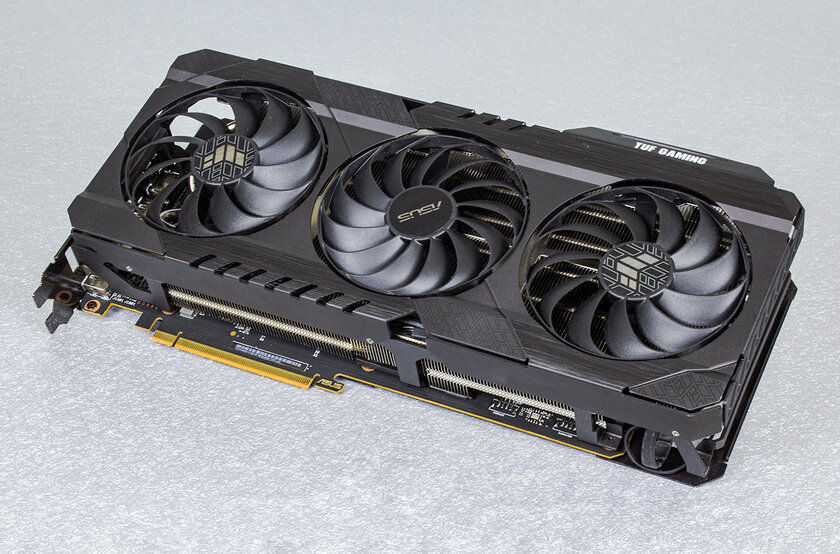 The 6800 XT system unit occupies three full-fledged slots, and it is also worth leaving room for free air access to the fans. The fastening bar is installed in two-slot. Four video outputs are located in one row.

The video card owes such dimensions for the most part to a radiator with a large fin area. It is clearly visible behind the metal casing of the fans and its mountings.

As you can see in the photo, the heatsink extends beyond the dimensions of the printed circuit board even in length. It is noteworthy that the fans are slightly recessed and do not protrude as the impeller beyond the dimensions of the casing. In the latter, additional protrusions are even made that protect the impeller from mechanical stress and increase the overall rigidity of the casing. 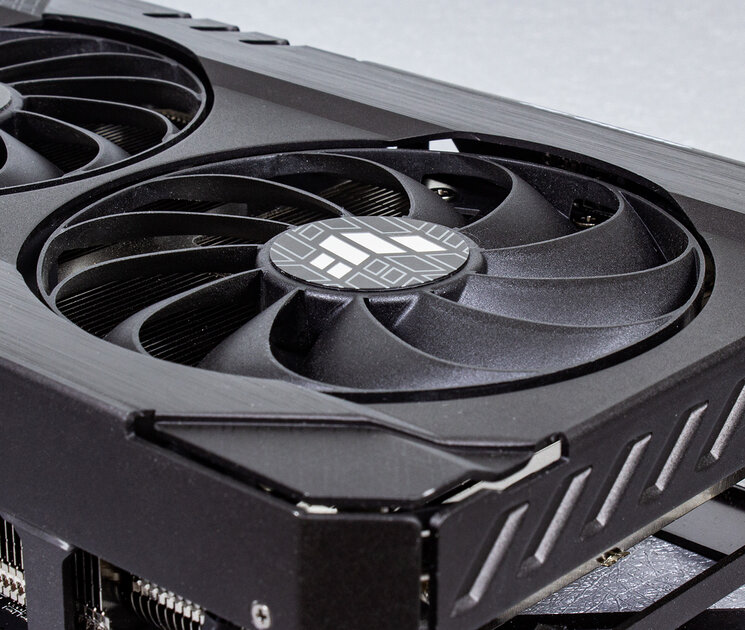 An aluminum plate is installed on the reverse side, which “works” as an additional heat sink, a stiffener and protects SMD elements from damage during installation. 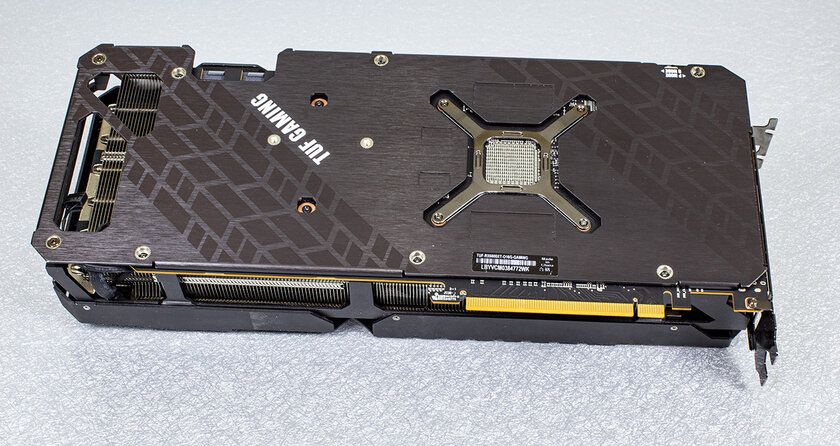 There are two power connectors, each with eight pins. Both are located at the top of the video card, in the cutout on the PCB. Not the most convenient option for connection, but acceptable.

Parsing a video card begins with dismantling the cooling system. The GPU heatsink, along with the surrounding frame, removes heat from the power section of the power supply system and video memory. Therefore, fastening to the PCB is done with ten screws, not counting the four spring-loaded screws around the GPU die.

Fans marked CF1010U12D in the amount of three are attached to the frame above the radiator.

Quiet branded Axial-tech fans with a variable number of blades (11 at the extreme, 13 at the central one), a restricting ring around the blades and a counter-rotating direction are used. They are capable of accelerating to over 3000 rpm. 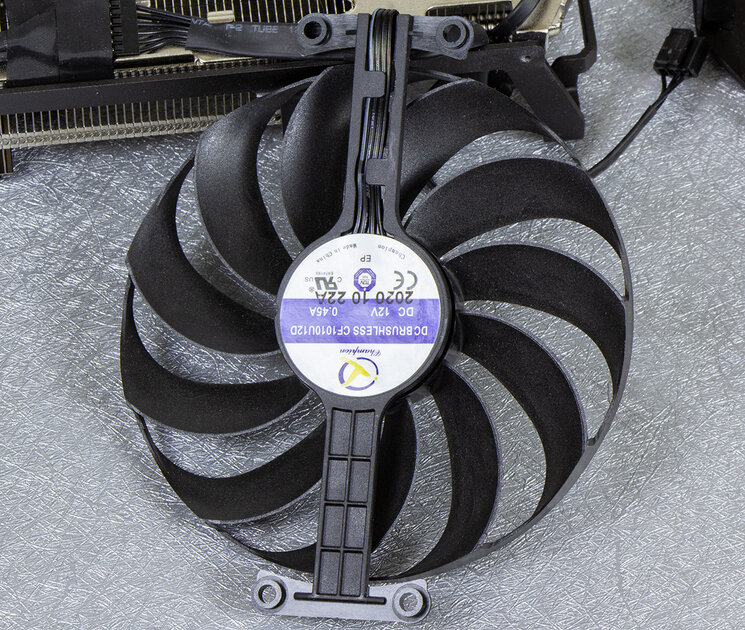 A small switch is mounted at the end that switches the profiles of the cooling system. P – Perfomance (productive), Q – Quiet (quiet). There is no fundamental difference between them, but in Quiet mode the video card works a little quieter at the cost of a slight increase in the temperature on the GPU.

The printed circuit board is large in area, and a significant part of it is given for voltage converters. 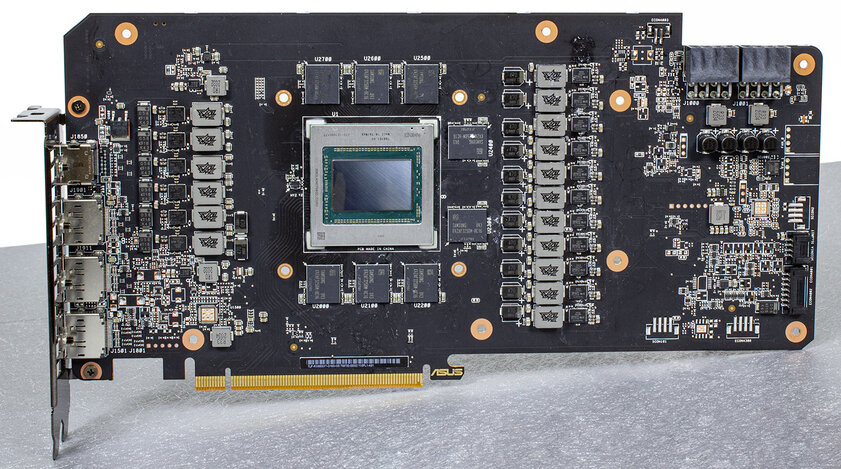 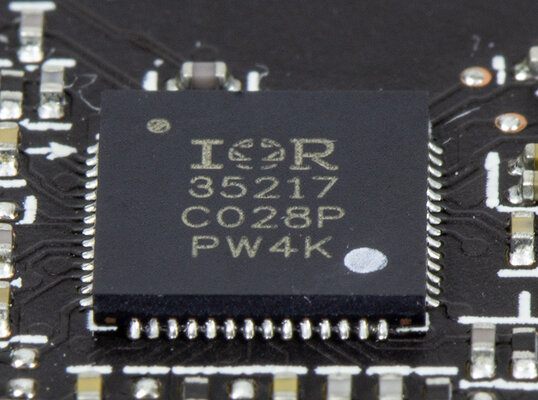 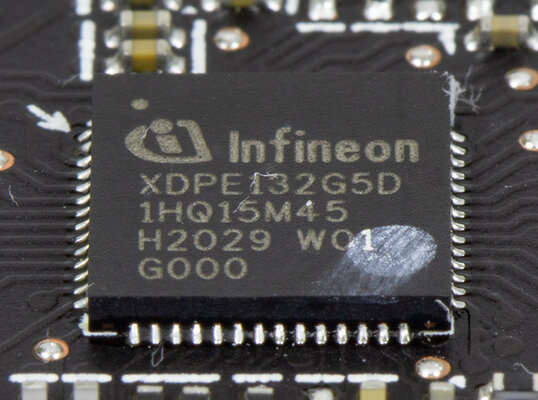 GPU and video memory are soldered between the power parts of the converters. 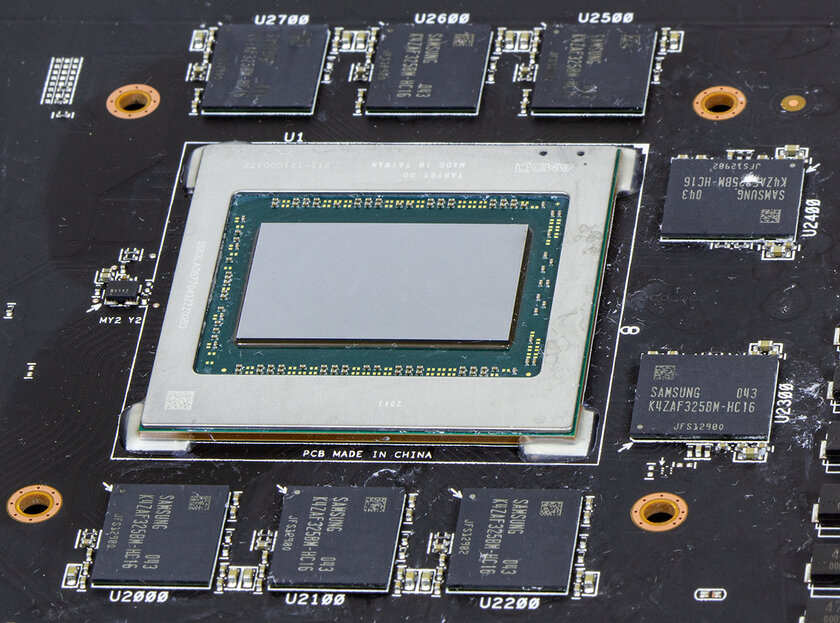 The heart of the video card is the NAVI 21 graphics processor, manufactured using a seven-nanometer process technology with 4608 stream processors, 288 texture units and 72 ROPs. Video memory 16 GB, type GDDR6, is connected to the graphics processor by a 256-bit bus. Frequencies 2065 and 2000 (16000) MHz (GPU and VRAM, respectively); in tests, the GPU overclocked to 2489 MHz. 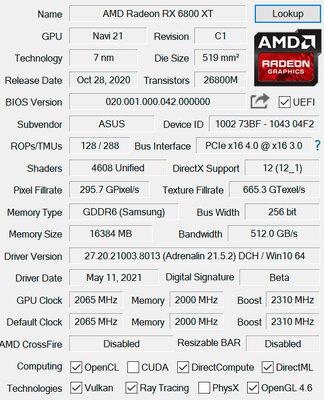 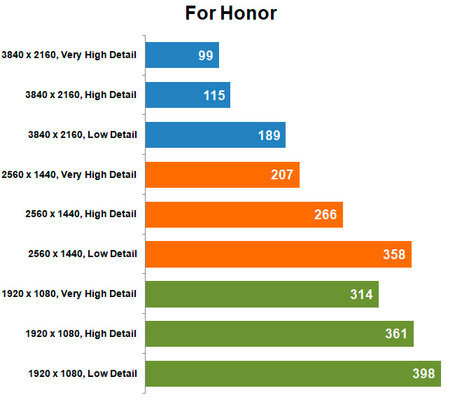 Tom Clancy’s Ghost Recon Wildlands cannot be attributed to light games, but the 6800 XT coped with it: 63 fps at maximum settings in 4K, 77 in QHD and 83 in Full HD. It is noteworthy that the frame rate is much more dependent on the quality settings than on the resolution. When applied to 4K, it is rare that the performance drop from going from QHD to 4K is less than 20%. In any case, absolutely all resolutions and settings are playable, minor loads are noticeable only at the beginning of the gameplay. 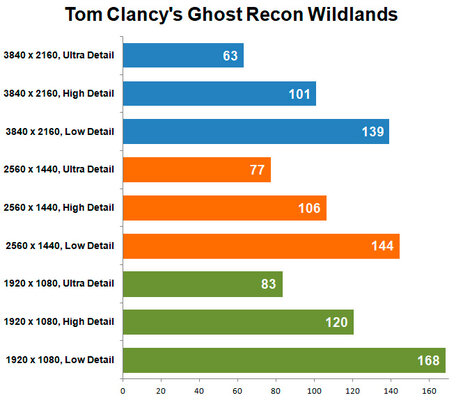 The famous shooter Far Cry in the New Dawn edition turned out to be easy for the 6800 XT: the differences between resolutions and settings are minimal. There was even a suspicion that the results were “fake” due to a configuration failure or some other glitch. Rechecked – the differences are minimal, within the margin of error. The game runs smoothly, jerks and freezes are completely absent. 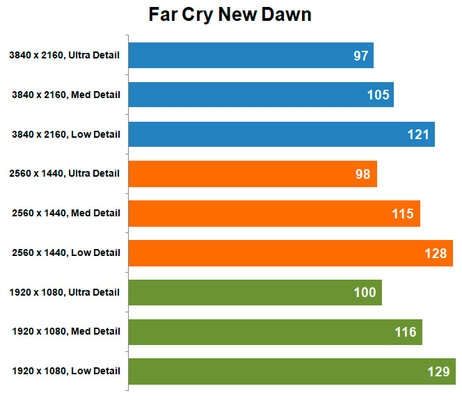 The strange shooter Control turned out to be a tough nut to crack for the hero of today’s tests, but it’s understandable: ray tracing puts a heavy load on the video card. And if the resolution is still serious … In general, in a 4K video card it was clearly difficult. But with a strong desire, you can play, since 50-60 fps is not 30, and the friezes are almost invisible. Comfortable “gaming” starts with QHD resolution with its 94-100 fps at maximum and medium settings. Ray tracing was only activated in the High preset. 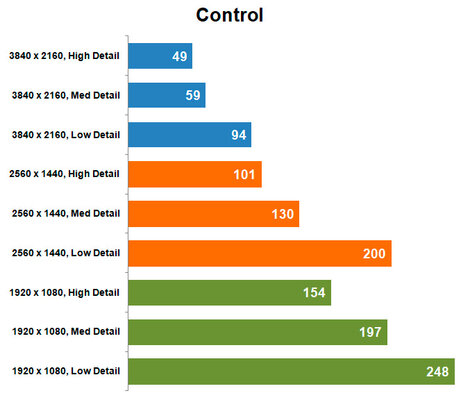 The relatively new part of Assassin’s Creed called Valhalla is lighter than the previous one in terms of general subjective impressions, and 4K was somehow too easy for the video card. 71 frames at the highest detail without a single sticking is very good. Much the same as For Honor, only smaller three-digit values. 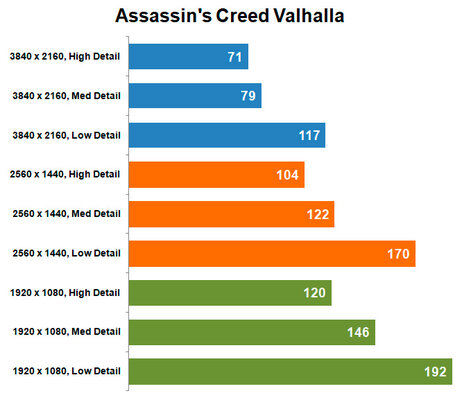 One of the hardest games for the 6800 XT is Metro Exodus. Alas, many important image parameters are not included in the general preset, so you have to reduce them manually. On the Extreme profile, DLSS, Ray Tracing and tessellation are enabled as expected. Hence the result is 27 frames in 4K and 44 in QHD. If we disable tessellation and all RTX chips, we will get a 1.5-fold increase in fps, all other things being equal. It’s comfortable to play at maximum settings in Full HD and, if you turn off ray tracing, even in QHD. If the picture quality is not fundamental, you can safely go down to the High-preset, there is even 4K without ray tracing and tessellation. 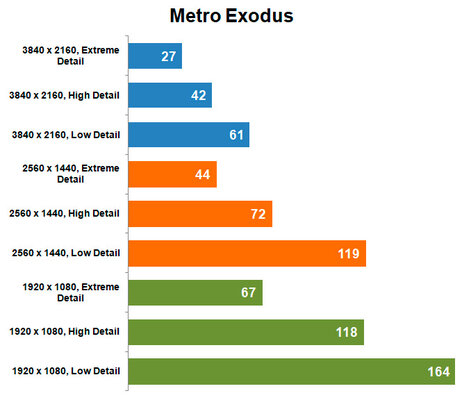 Great real-time strategy Total War: Three Kingdoms loads the graphics card perfectly without any RTX technology. The key to “success” is a lot of small objects that need to be drawn in great detail. Therefore, at maximum and high image quality, fps is low. But the 6800 XT draws its 55-70 frames even in 4K, and in QHD there are already a hundred. 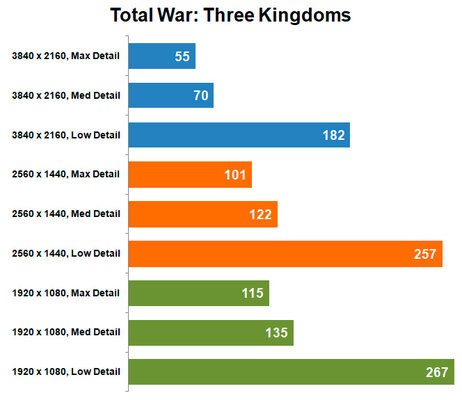 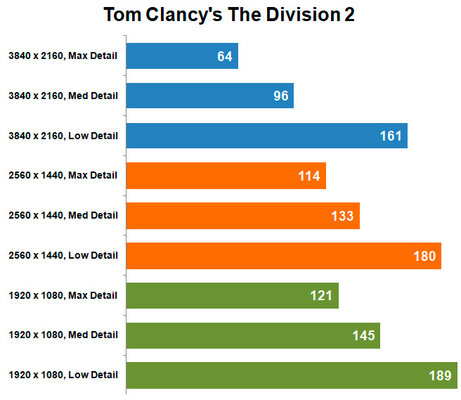 The first part of Horizon, which is Zero Dawn, is frankly good at 4K. In terms of numbers, everything seems to be average, but according to subjective sensations, everything is fine: smoothly, without long loads, clearly and saturated. And even nothing to add. 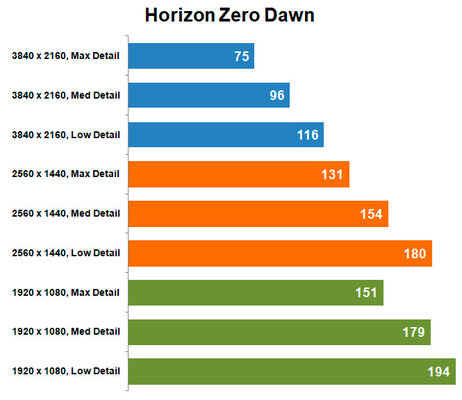 The most talked about hit of 2020 – Cyberpunk 2077 – turned out to be very diverse in terms of presets. If you activate ray tracing, then you can actually play only in Full HD (DLSS is disabled). If you are just satisfied with the high quality of the picture, then already in QHD everything is smooth and stable. 4K works well, alas, only at medium and low quality settings. And then, there are unpleasant short-term sticking when changing locations. 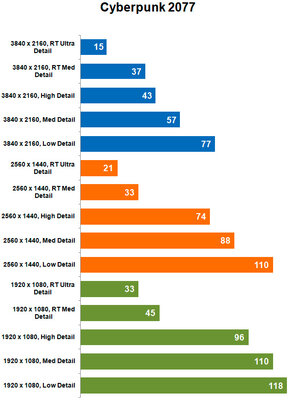 The huge heatsink fin area gives its advantages: the GPU temperature is only 60 degrees at 2100 rpm. And this can be called the best option, since at 2970 rpm (maximum rotation speed) the temperature dropped by only four degrees. Want some silence? You can limit the speed to 1800 rpm, and the GPU will heat up to 64-67 degrees, which is completely safe for it. 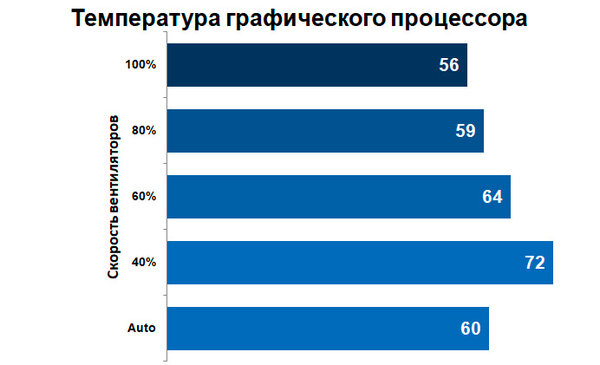 It is convenient to adjust the parameters of the video card using the GPU Tweak II utility, which can be downloaded from the ASUS website. It can work in simple mode, where the user selects one of three preset profiles … 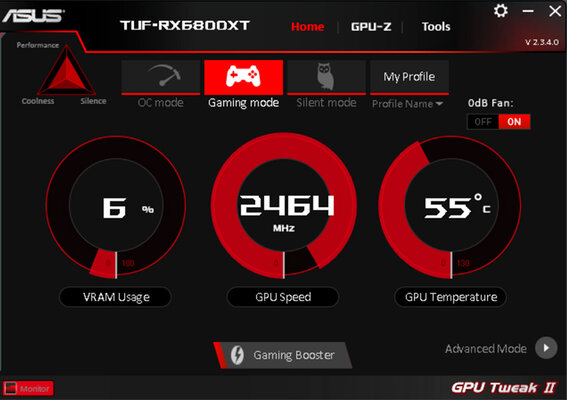 … And in advanced mode, when the frequencies and voltage of the GPU can be changed manually. 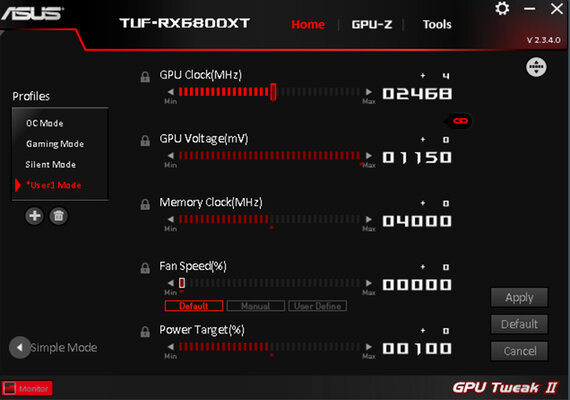 A graph of the dependence of the fan speed on the temperature of the GPU is also available for editing. 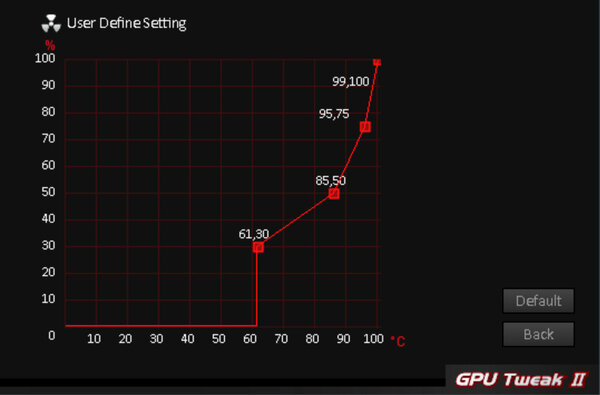 In a separate window of the program, data from the main sensors on the video card are presented in the form of graphs.

Also from GPU Tweak II is the GPU-Z utility, which displays basic information about the video card. 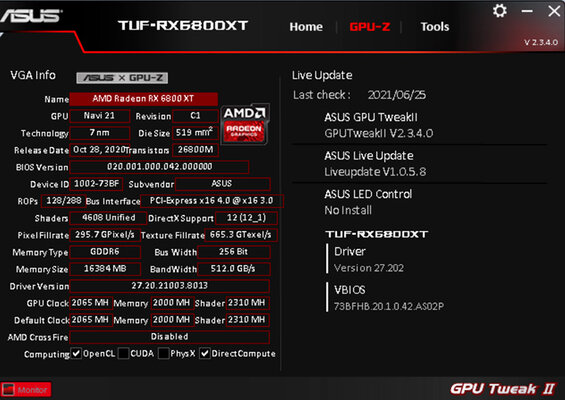 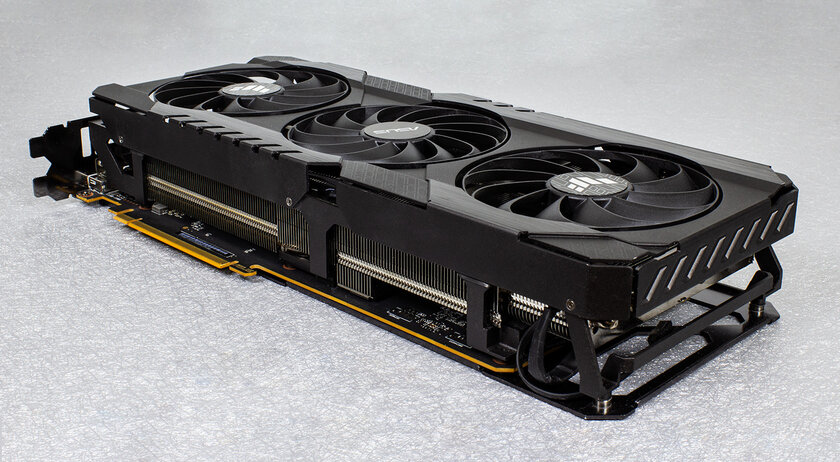 The TUF version of the Radeon RX 6800 XT graphics card from ASUS is an excellent version of a powerful accelerator. There are no special additions here, such as the ability to connect additional fans or lighting, but everything is done very well. Powerful and quiet cooling system, high GPU frequency, efficient power system, pleasant appearance. If you have 130 thousand rubles and you are ready to spend it on a video card, consider this option.

5 legendary cars that caught the eye with a monstrous grille

Coronavirus: Worrying Facts About Depressive And Anxiety Disorders – How…

Derek Black Oct 22, 2021 0
Worldwide, depressive and anxiety disorders worsened during the coronavirus pandemic, according to a clinical…

Alec Baldwin and the other tragic deaths on the set

Oct 22, 2021
Twenty-seven years have passed since Brandon Lee was killed while filming The Raven, shot in the abdomen by a…

Carolina Marconi: “They removed both breasts, I was…

Oct 22, 2021
The letter was written on Instagram, not to celebrate the near end of chemotherapy, but to recall one's experience…

Alabama: A death row inmate was executed 30 years ago

Oct 22, 2021
An African-American man convicted 30 years ago of killing a white woman has been executed by authorities. Alabama…
Prev Next 1 of 5,503
More Stories