AUD/USD recovers above 0.6800 after USD weakness and US PMI.

The Australian dollar (AUD) It advances in NY session but pulls back after hitting a fresh 2-month high around 0.6840 as sentiment has soured. US economic data paints a gloomy economic picture, while rising borrowing costs from the Federal Reserve (Fed) are expected to keep the economy under pressure. That being said, the US dollar (USD) remains on the defensive, undermined by falling US Treasury yields. At the time of writing, AUD/USD is clinging to the 0.6800 figure.

The dollar weakened as the ISM manufacturing PMI was released

US stocks are trading at a loss. The Institute for Supply Management (ISM) for the month of November revealed that the Manufacturing PMI fell below the expansion/contraction 50 levels, dipping to 49.0 from 49.2 estimated by analysts. Timothy R. Fiore, Chairman of the ISM, commented that US manufacturing activity plunged into contraction, with the PMI reaching its lowest level since the pandemic began. The report “reflects that companies are preparing for lower production.” Following the report, the AUD/USD pair fell from the daily high of 0.6845 to 0.6810.

Before the Wall Street open, the Labor Department revealed that initial jobless claims last week rose by 225,000, down 16,000 from the previous week and below the 235,000 expected by the analysts. Continuing claims rose from 1.57 million to 1.603 million, showing that the job market remains tighter than Federal Reserve officials expected.

US core PCE rose 5% but failed to lift the dollar.

At the same time, the US Department of Commerce (DoC) revealed the Federal Reserve’s preferred measure of inflation, US Core Personal Consumption Expenditure (PCE), which rose 5% year-over-year, per down from 5.2% in October. Although the report reports that inflation is starting to subside, it is still too high. Although prices have stabilized in the past two months, Federal Reserve Chairman Jerome Powell said he needs “substantial evidence” that inflation is cooling.

What to watch out for

In addition, in Australia, the calendar will include retail sales for October, housing data and the appearance of the Governor of the Reserve Bank of Australia (RBA), Philip Lowe, who will cross the wires. In the United States, the November Nonfarm Payrolls report will update the labor market situation, while the speakers of Fes, before the blackout period, will cross wires.

Although the AUD/USD failed to break out of the 200 day EMA around 0.6840, its bias remains bullish, further cemented by the Relative Strength Index (RSI) in bullish territory heading higher. However, AUD/USD needs to stay above Wednesday’s high at 0.6801, so the pair could consolidate within the 0.6800-0.6850 zone if buyers want to push prices higher. If this scenario plays out, AUD/USD’s first resistance would be 0.6900, followed by the August 26 high at 0.7000. As an alternate scenario, AUD/USD first support would be 0.6800, followed by the 29 November high of 0.6748, above the 0.6700 figure. 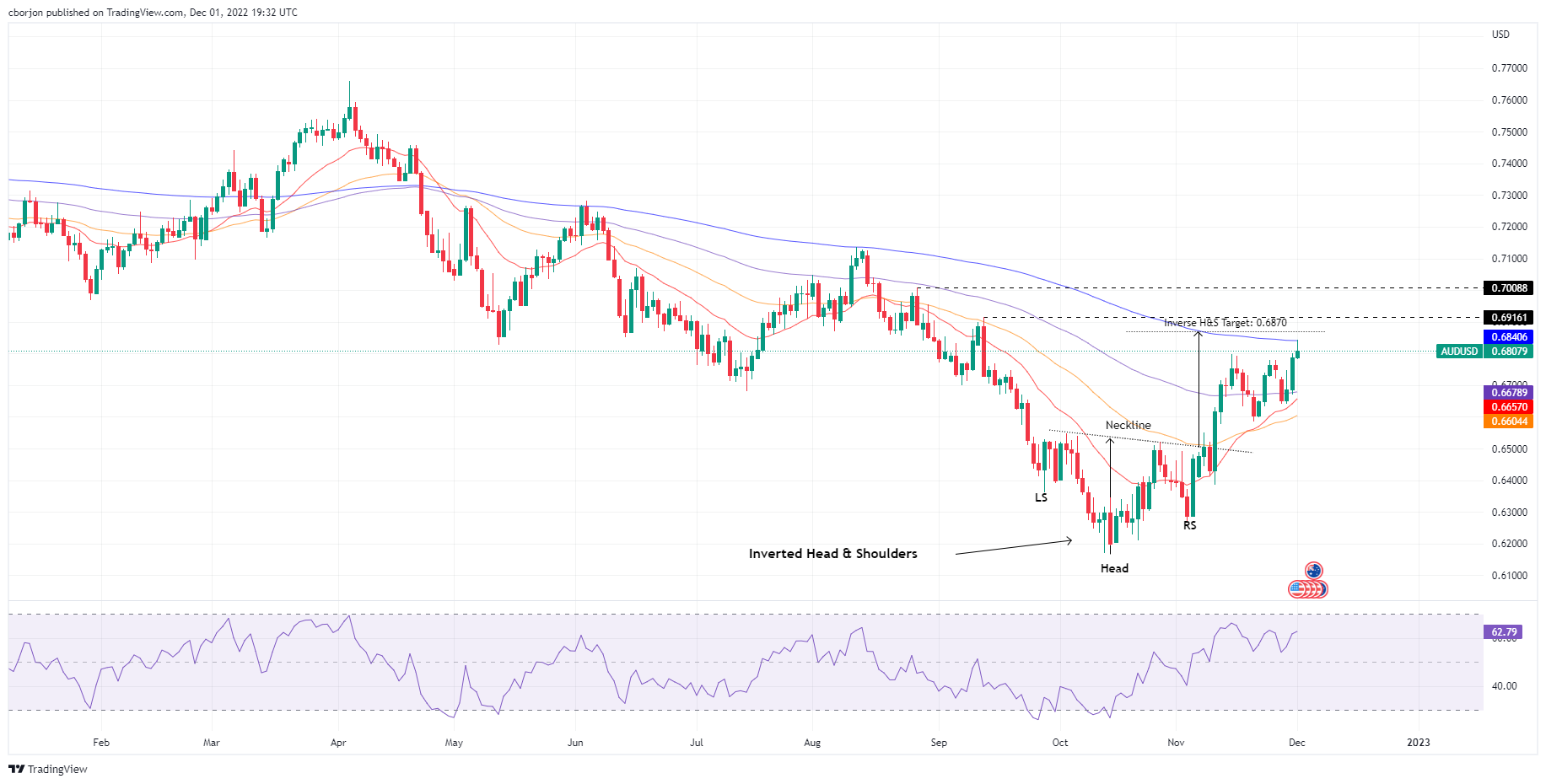 I am a writer for World Stock Market. I have been working in finance for over 7-8 years, and I have experience with a variety of financial instruments. My work has taken me to Japan, China, Europe, and the United States. I speak Japanese and Chinese fluently.

- Advertisement -
Share
Facebook
Twitter
Pinterest
WhatsApp
Previous article
Did Gabriel Soto and Irina Baeva break up? They claim there was violence in the relationship
Next article
France: 450 victims of sexual violence within the Catholic Church have been identified