New loans in the first half of the year, which also include refinancing, reached the level of 16.9 billion euros, an increase of 52% compared to the corresponding period last year. At the same time, it is a decade-long record, as these levels were last seen in 2012, when the major deleveraging due to the crisis had already begun.

According to his clarifying question Capital.gr to DBRS, the total funding from the four systemics is calculated for the first half as follows:

And this, when the total net credit expansion was 3.7 billion euros which came exclusively from the business sector. However, new disbursements recorded in the private sector as a whole amounted to 9 billion euros, of which 7.7 billion related to business credit. The remaining approximately 8 billion euros were mainly refinancing.

Routed agreements are the main source of credit expansion. The cases of the Motor Oil-Ellaktor deals, the new borrowing and refinancing of Fraport airports, the second refinancing of the Eleftherios Venizelos airport that follows, as well as another large series of business plans that have been launched or are in progress (e.g. the financing of the company Anemos of Ellactor, the program of DEPA, the deals and the needs for working capital in the food sector, such as in grains and mills, etc.).

In the next period, the largest deals and financings concern infrastructure-privatizations (2.3 billion was the forecast for the whole of 2022), food and beverages (2 billion) and telecommunications and transport (1 billion), while financing needs are increasing in energy, real estate, construction and manufacturing.

Greek banks are seeing strong demand for refinancing older loans – even bond or foreign bank positions – as market conditions have changed since monetary policy changes and inflation, banking sources said. Something that is going to continue together with the rest of the loans of around 5 billion euros concerning launched or ongoing business moves and investments, along with the privatization program. These additional needs, together with working capital due to increased costs, are estimated at approximately 5 billion.

Of this total, not all amounts may be disbursed until the end of December, creating a cushion for 2023, when several of the repayments of the 18-month co-financed loans (pandemic support) totaling €2.5 billion will fall due. Also, plans of around 3 billion euros have been added to the Recovery Fund, while another 5 billion are expected by the end of the year. However, of these it is estimated that 1 billion will be contracted and the disbursement will reach around 250 million euros towards the end of the year. At the same time, from the privatization program of 2.5 billion euros, it is estimated that within the year the portion of 1-1.15 billion euros will be financed. Therefore, a new “tail” is created towards 2023.

These 10 billion euros of the second semester, if there is no negative development, will offset the planned repayments of loans that will come mainly from tourism-related businesses, after the end of the tourist season (repayments of loans received by previous months with the important receipts of the season). In addition, banks can cover a possible increase in risk costs due to the macroeconomic environment.

Containment of lending costs to businesses

This combination, i.e. the high demand for loans, the increase in interest income from the movements of the ECB and the smaller losses from deposits, makes it possible to contain the cost of lending mainly to businesses. Interest income is boosted by loans, while interest expenses are also contained because excess liquidity no longer earns negative interest rates, while interest rate increases on customer deposits are phased in after the ECB’s key rate exceeds 0.5%.

However, this restraint is estimated to concern mainly business credit and not retail, with the first increases starting from consumer credit. In businesses, already, the first increase in interest rates by 0.5 of the unit did not cause a significant burden, as the euribor remained negative (many loans do not take into account the negative euribor and are only burdened by the margin), while the majority of loans are interest-bearing (the older the loan, the lower the interest payment).

The strengthening of credit expansion was the main factor in increasing the organic and net profitability of the four systemic banks. And this is the main reason they have revised the targets for 2022 upwards, says the rating agency DBRS in the report it published yesterday. 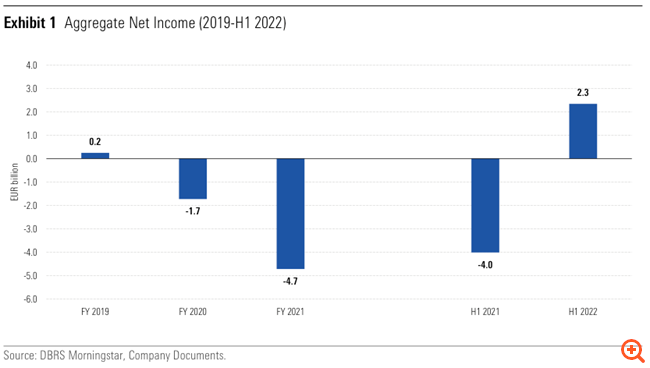 Thus, as bank sources explain, without significantly increasing business credit rates and with small reductions in retail credit, banks managed to strengthen the interest margin. This was helped by the increase in serviced loans (new credit expansion and further reduction of non-performing loans). Interest income is also expected to be boosted by the ECB’s interest rate hikes. Already, the one that took place in June boosts annual revenues by a total of 200-240 million euros, while another amount is the benefit of the expected interest rate increases until the end of the year. It is noted that technically the reduction of bad loans reduces interest income as accounting income (accruals) is not calculated while there is also the cost of securitization (organic effect).

The deals and numbers that bankers see for the next day
The great comeback of Greek banks – The new target prices after the second quarter results
Eurobank: Upward revision of targets due to positive half-year – 71.7% increase in organic operating profit
Alpha Bank: Dividend 20%-30% of 2023 earnings
Higher profits for Piraeus Bank shareholders in 2022
P. Mylonas (ETE): With higher income from interest and commissions it will close in 2022

GBP/USD recovers to 1.2000 level as sentiment improves despite Fed comments