China has sent warships and fighter jets across the demarcation line of the Taiwan Strait today, Taiwan’s Ministry of Defense said.

Several groups of warships had crossed the demarcation line as of 11 a.m. Friday local time (6:00 a.m. Greek time), Taiwan’s Defense Ministry said, in the first confirmation of such an act in recent years.

Shortly after, the ministry informed that fighter jets had breached the median line of the Strait 68 times by 17:00 local time.

Taiwan’s defense ministry condemned China’s military forces’ deliberate violations of the middle line of the straits and encroachments on its territorial waters and airspace.

At the same time, he emphasizes that the country’s army will vigorously defend national security.

According to the ministry, China has seriously damaged the status quo of the Taiwan Straits.

For its part, China’s military had earlier reported that it conducted “air and sea combat exercises in the north, southwest and east of Taiwan” and that it continues to “test the joint combat capabilities of the troops.” 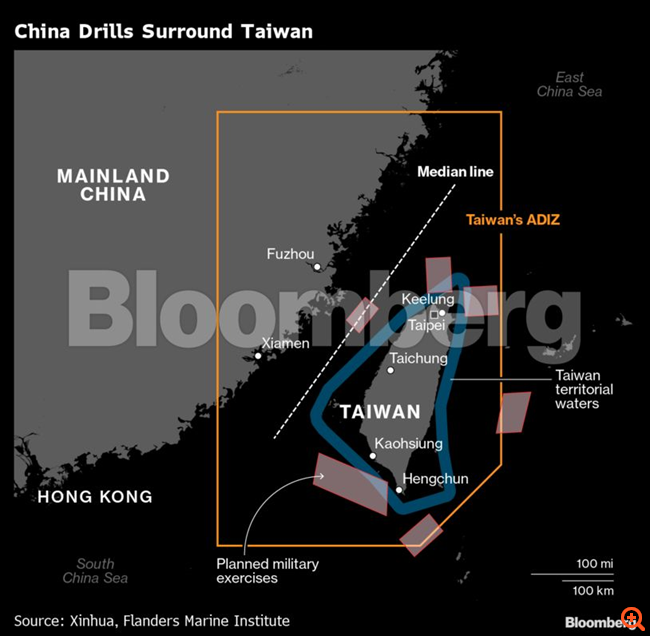 China’s military also sent warplanes beyond the limit set by the US, the ministry said, the third straight day of such flights since the arrival of US House Speaker Nancy Pelosi.

Multiple PLA aircraft and vessels were detected participating in drills around Taiwan Strait and have crossed the median line. #ROCArmedForces have utilized alert broadcast, aircraft in CAP, patrolling naval vessels, and land-based missile systems in response to this situation. pic.twitter.com/lVpRWCZxhm

This show of force comes after Beijing broke another precedent by firing four ballistic missiles over Taiwan on Thursday, according to Japan’s defense ministry. It was among five Chinese missiles that landed in Japan’s exclusive economic zone, according to Tokyo.

While neither China nor Taiwan confirmed the missiles’ flight paths, the PLA’s Eastern Theater Command shared a state media report with an expert saying they flew over the island.

“It’s another sign that China is much more assertive — and I would really use the word aggressive, heavy-handed — in its approach to Taiwan,” Richard Haas, president of the Council on Foreign Relations in New York, told Bloomberg.

Haae said the barrage reflected a “counterproductive foreign policy” that would “strengthen Japan’s determination to integrate itself even more closely in Taiwan’s defense” and bolster support in Washington for increased defense spending.

A map of the missiles’ trajectories showed that at least one of the weapons was believed to have flown over Taipei before landing in Japan’s EEZ — a move that would be seen as a major escalation by Beijing. pic.twitter.com/YpUHh2zGA4

Taiwan’s Bureau of Shipping and Ports on Thursday advised ships to avoid designated areas around the island until Aug. 8 in waters east of the island, suggesting Taipei believed the drills could last a day longer than expected. Beijing had initially announced.

It also sent 22 warplanes over the US-defined line for a second straight day – the most since the island began releasing data in 2020.