Bitcoin and Ether at record rates – At $ 3.1 trillion. the capitalization of crypto

Bitcoin and Ether hit record highs on Tuesday as the cryptocurrency market expanded its rally in recent days, with analysts estimating that investors are turning to crypto seeking hedging against the risks of rising inflation.

The total value of cryptocurrencies now “reaches” 3.1 trillion. dollars, according to CoinGecko. 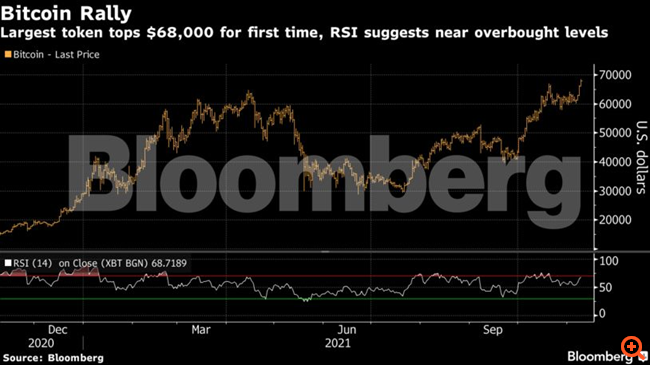 Since the beginning of the year, Bitcoin has strengthened more than 130% and the price of Ether has skyrocketed by 550%.

“Cryptocurrencies are at the forefront of hedging against inflation,” wrote Chris Weston, an analyst at Pepperstone Financial Pty.

Records in stock returns may also spur the appetite for more risky investments, possibly pushing some markets into risky areas. The US Federal Reserve warned in a report that asset prices are vulnerable if the investment climate worsens, and pointed to the risks of stablecoins, a type of token that is supposed to have a stable value.

Bitcoin last set a record in October after the start of trading in the US market of the first mutual fund associated with Bitcoin. This step reinforced the view that digital currencies are gaining more acceptance by “mainstream” and institutional investors.

“This Bitcoin launch could signal the start of a push-up for the fourth quarter before the cryptocurrency market shows a more stable picture next year,” Fundstrat said in a technical strategy report on Monday.

Another theory about the Bitcoin rally is Elon Musk. Musk’s followers on Twitter voted in a poll conducted by the CEO of Tesla in favor of selling 10% of his shares in the electric car industry.

Asked what he could do with the revenue, Bitcoin is on the horizon after Musk has said in the past that he would like to see the world’s most popular cryptocurrency succeed, while he has bought Bitcoin, Ether and Dogecoin.

Michael Saylor, chief executive of MicroStrategy Inc., said converting Tesla’s balance sheet to Bitcoin “would provide protection against inflation and greater returns for investors in a tax-efficient manner,” he said.

“We will see corrections along the way, without a doubt,” said Vijay Ayyar, head of the Luno cryptocurrency exchange in Singapore. “But we are at a point where there is a huge ‘promotional campaign’ for this category of assets and the extent to which it will play a role in non-financial sectors such as gambling, entertainment, social media and the arts.”

Cool reaction on the Wall after Friday’s chill

Derek Black Nov 30, 2021 0
The tiny Hungarian village Vors has a long tradition that survived even in the years of communist rule: every year…

Nov 30, 2021
The Ministry of Foreign Affairs of Russia call her European Union to re-read carefully its resolution 2202 UN…

Like a shiny sphere! 15 cute nail designs in golden tones to wear for…

Nov 29, 2021
The best celebration of the year is coming: Christmas! and it is time to think about how to fix our nails to show…
Prev Next 1 of 6,364
More Stories

The crude reacted with a rise of 2.6% after Friday’s…

GBP / USD falls below 1.3300 as sterling traders worry about…