BoG study: Which deposits per step increased during the pandemic and how much

They say that money goes to money. Perhaps, this phrase is commonplace or misleading, at least, for the Greek deposits that increased by about 40 billion euros from the beginning of the pandemic in 2020 until the end of 2022. It makes sense, because higher incomes have more savings. Misleading because there is no data available on the number of bank accounts per step, nor data per depositor (TIN).

For these reasons, the conclusions and approach of the BoG study on the distribution of deposits and how they increased during the pandemic are of great interest. Please note that these data are not available for statistical purposes. For auditors – regular, sampling, etc. – are made available, following specific procedures and through competent authorities.

The Bank of Greece followed a methodology, which led to the following main conclusions:

Thirdly60% of the absolute increase in deposits with individuals came from the categories of accounts between 5,000 euros and 100,000 euros.

Fourth, More than 90% of the absolute increase in corporate deposits came from categories of accounts over 100,000 euros.

Sixththe largest “excess liquidity”, ie a larger increase from the pre-pandemic trend, was observed in the scales with balances from 5,000 to 50,000 euros.The above (in relation to the trend) savings is estimated at 3 billion in the two years 2020- 2021. 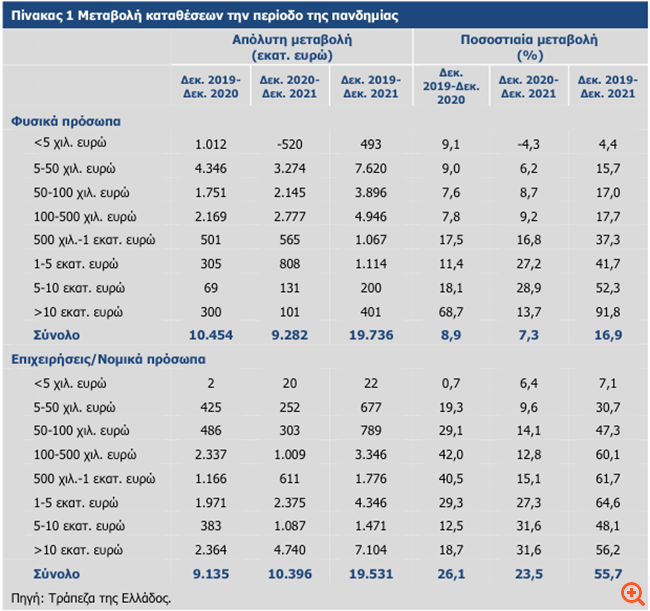 Number of accounts per amount

For example, based on the BoG calculations, it appears that in December 2021 the category of accounts: 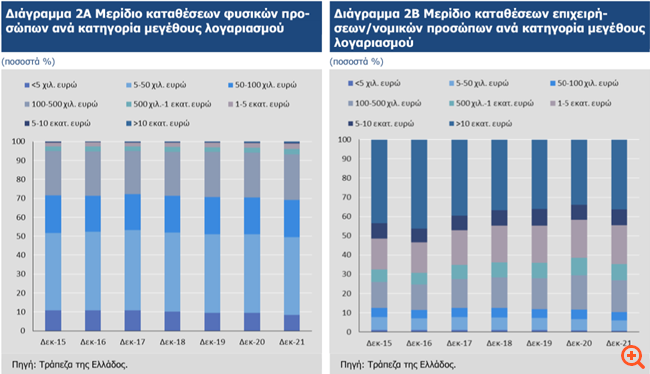 Reasons for the increase per step

In the smaller scales, it is estimated that they reflect, inter alia:

(a) measures of budget support and deferral of commitments taken during the pandemic to support workers in affected sectors in order to maintain existing employment and disposable income; and

(b) the reduction of consumption due to the implementation of measures of social distancing.

For the higher categories over 50,000 euros, the growth continued steadily or accelerated in 2021, ie these categories continued to accumulate deposits, which may be associated with faster economic recovery combined with increased momentum to save.

According to the BoG, an estimate for the “excessive” deposits of individuals, shows that the two lowest categories of deposit accounts up to 50,000 euros recorded in December 2020 the highest deviation from the trend compared to other categories (representing this year above 3⁄4 of the total divergence of retail deposits), which, however, showed signs of de-escalation thereafter. It is possible that these deposits are more affected by the economic recovery, possibly because to some extent they directly reflect business / self-employment. , not necessarily from dependent work, in an environment of limited investment options. 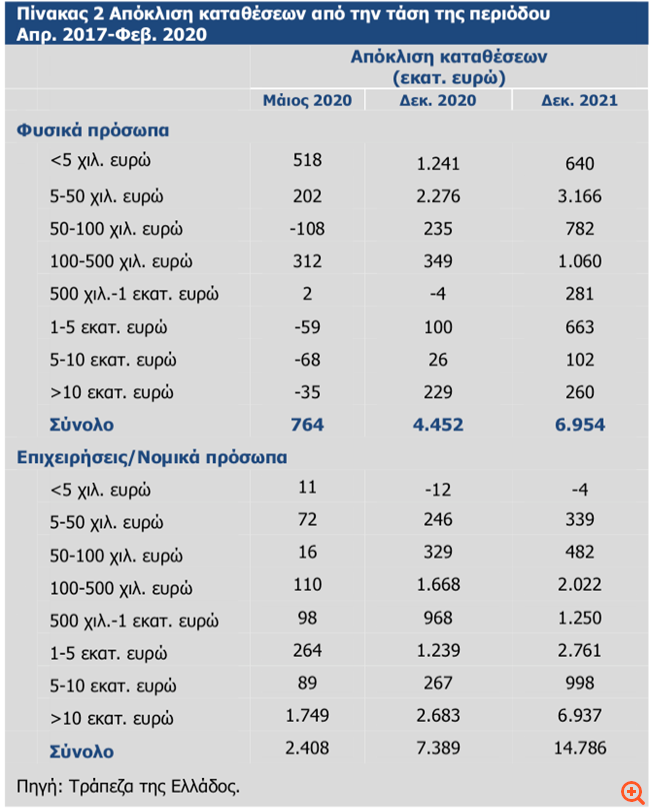 Unlike individuals, corporate deposits consist mainly, at a rate of over 70%, of accounts over 500,000 euros, with the result that their general development is mainly influenced by those of larger companies.

Between December 2019 and December 2021, the largest part (over 90%) of the absolute increase in corporate deposits came from the categories of accounts over 100 thousand euros. The growth of corporate deposits slowed significantly in 2021 for the categories of accounts from 5,000 to 1 million euros, while it remained relatively stable or accelerated for the very low accounts below 5,000 euros and for the higher accounts over 1 million euros.

This development, the BoG notes, probably reflects in part the evolution of bank lending over the last two years due to the reduction in 2021, compared to the previous year, of resources through development agencies that were available to small and medium-sized enterprises. Excess corporate deposits expanded further in 2021 compared to 2020 for all categories of deposit accounts, mainly for accounts over 1 million euros.

Entrepreneurs signal to Planalto annoyance with possible change at Petrobras

Eurozone consumer confidence rises to -21.1 in May from -22.0 in April

One of the top managers of Binance left the company

Derek Black Jul 4, 2022 0
The treatment of hair concerns many people, especially women, but one woman from Japan she deservedly claims the…

Jul 4, 2022
The man behind a shooting at a Copenhagen shopping mall that left three people dead and several injured was…

Jul 4, 2022
In an interview with CNN this Monday (4), FAAP professor of International Relations Carlos Gustavo Poggio…
Prev Next 1 of 15,529
More Stories

Transaction fees on the Ethereum network dropped to December…