Seeing the world through the eyes of a child is a privilege that we all enjoy, although, unfortunately, it ends with age. But there are little ones who cannot even enjoy being around them in the most important stage of their lives because they develop vision problems when they are still infants. As if that were not enough, the economic situation of many families does not allow these problems to be dealt with adequately.

This is the case of an Argentine boy named Josué who urgently needed a new pair of glasses, but his family could not afford them because his mother was fired from her job and they were having problems with money. Although he never stopped going to class, it was probably very difficult for him to read the blackboard. 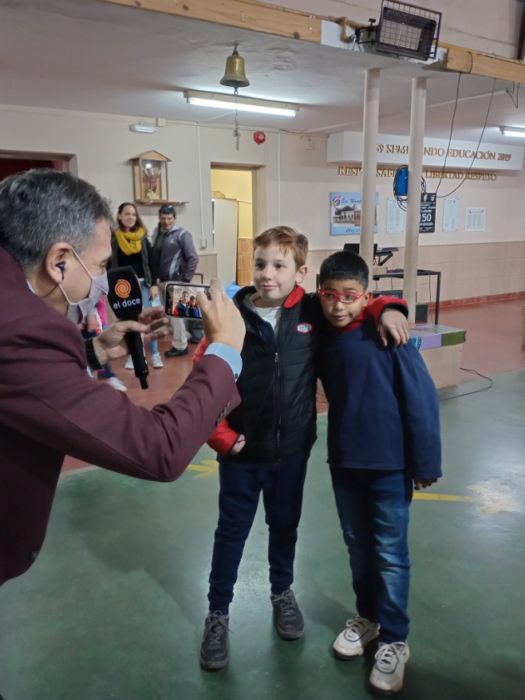 But one of his colleagues knew how to identify his friend’s problem and did not sit idly by when he saw that he tied his glasses with a wire. He quickly started a fundraising campaign to raise money to buy Josué’s new glasses. The boy who started the collection is called Joaquín and he decided to use social networks to ask for everyone’s help.

In addition, as an inaugural act and showing that his intention was genuine, he put up the first donation, giving all his savings for the cause. The goal was to collect 180 dollars and Joaquín put his 4 thousand Argentine pesos, that is, around 35 dollars. Now, the collection has been fulfilled thanks to Joaquín and his family, for which Josué’s mother is really moved.

Help me share? My son Joaquín is collecting a few pesos to help his partner Josué who needs new glasses! He was saving to go see Los Pumas in San Juan in August but he prefers to use his savings on glasses for his partner! Twitter do your magic! pic.twitter.com/9umA0iu05p

Joaquín and Josué are nine years old and they are in the same elementary grade, together they have become celebrities and they are the protagonists of the most inspiring news of the moment. Josué’s mother says she cries every time she sees Joaquín’s video and she thinks that in this heartless world it is very hopeful to see acts of solidarity like this.

That a nine-year-old boy has made such a decision has surprised me a lot. Every time I see the video on some channel I start to cry.

Fedez and the lesson to his son: “Pink is not a color…

How to see who is looking at your TikTok profile

Maturity 2022, one month to the exam that goes back to before Covid

Jane Harper May 22, 2022 0
The new leaders of Australia have not yet been sworn in after Labor's victory on Saturday, but the country is…

USA: Masks return to New York due to monkey pox

May 22, 2022
The return of masks indoors New York Health Authorities ruled in favor of the first case smallpox of monkeys. At…

May 22, 2022
the ukrainian president Volodymyr Zelensky accused the Russia to block the export of 22 million tons of food…

Biden on monkey pox: Everybody has to worry – We work hard to…

May 22, 2022
Worried about smallpox of monkeys seems to be the Joe Bidenwith the US reviewing all available data on treatments…

Ukrainian prisoners could be exchanged for detained oligarch, says…

May 22, 2022
Russia is considering exchanging Ukrainian prisoners from the Azov regiment for Viktor Medvedchuk, a pro-Russian…
Prev Next 1 of 13,456
More Stories

Holidays in nature: the best hotels in Italy

Pizza in a pan without yeast, the perfect recipe

Albania, inland on the road: the discovery of beauty