Brazil elections: Lula first, the winner will be decided in the second round

The center-left former president Lula took the first place in the 1st round of the presidential elections held yesterday Sunday in Brazila, ahead of far-right head of state Jair Bolsonaro, but his lead is much smaller than polls had predicted and a runoff between the two will need to be held on October 30.

THE Luis Inacio Lula da Silva secured 47.91% of the votes, compared to 43.65% of Mr. Bolsonaro, based on the results published by the Supreme Electoral Court (TSE) with 97.3% of the votes counted, while the polling institute Datafolha credited him last Saturday with lead of 14 percentage points.

These numbers mean that Lula’s victory from the first round is impossible, as reported by international agencies and relayed by the Athens News Agency.

“The fight goes on until the final victory”

“We will win these elections,” assured the historic leader of the Workers’ Party (PT), which received about 48% of the vote to 43% of Mr. Bolsonaropromising “more travel, more gatherings” to meet with Brazilians as he seeks a third term in the country’s top office on October 30.

Bolsonaro: “We beat the lies” of the polls 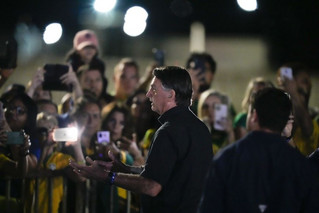 Brazil’s far-right president said he had “defeated the lies” of the polls and expressed optimism ahead of the October 30 runoff.

The head of state received 43% of the vote to his opponent’s 48%, although the most recent poll by the Datafolha institute, released last Saturday, gave the centre-left former president a lead of 14 percentage points.

“Congratulations, brother and comrade Lula. The people of Brazil have once again demonstrated their democratic inclination and especially their inclination to equality and justice,” Mr. López Obrador, who also belongs to the Latin American left, said on Twitter.

- Advertisement -
Share
Facebook
Twitter
Pinterest
WhatsApp
Previous article
Damares Alves is elected senator for the DF; Arruda is in 2nd
Next article
Cyclone Ian: The death toll at 62 – Entire districts were wiped off the map