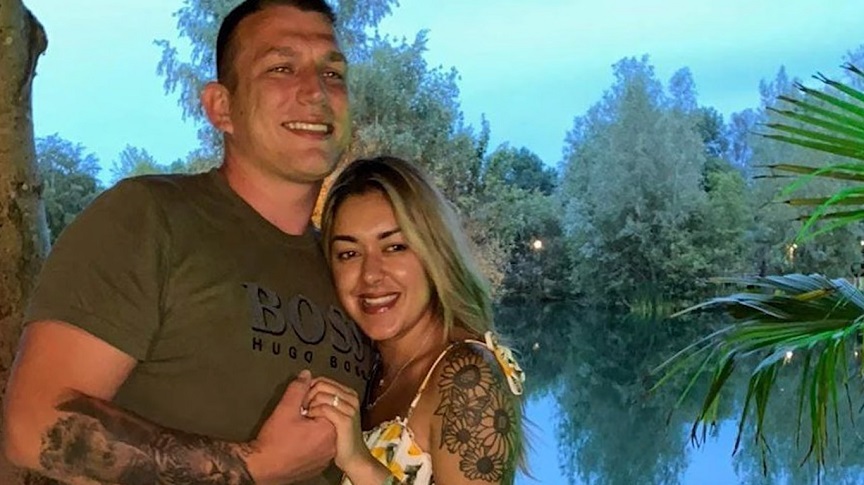 A marriage proposal in a romantic lakeside setting went horribly wrong when the groom-to-be dropped the ring initially on the platform and after it bounced it fell into the water.

Ross Bamber had set up a camera to capture the perfect moment with partner Gerii Ashforth in Lake Norfolk.

The camera captured everything, including the sound of the ring bouncing and his partner, who still had her eyes closed, saying, “I don’t think that’s it, is it?”

Millions have seen their videos on TikTok.

The couple, from Costessey near Norwich, had rented a luxury cottage at Wispy Meadows in Watton Britainwhere Ross Bamber planned to surprise his partner.

The 26-year-old had meticulously planned everything and as the candles flickered and the sun set over the lake, he led his partner out blindfolded.

And that’s when everything went wrong.

“I took Gerii out and when I opened the box, the ring actually said ‘No,'” he explained to BBC.

“I was watching it bounce on the wooden floor, then it stood on the edge of one of the planks, and I thought, ‘Wow’ – and then it just fell into the water,” he says.

His 23-year-old fiancee said she had a “tiny suspicion” her partner was going to propose, but it was by no means what she expected.

“I heard it bounce and I thought, ‘Please, don’t be the ring…’ – my heart stopped,” she said in turn.

As the couple says, after the unfortunate incident, their friends rushed to help and “went into the lake in shorts and swimming goggles, but they couldn’t find the ring,” says the 27-year-old.

They even tried a magnet, but the ring was made of platinum and that didn’t work, she adds.

The next day the couple went to Norwich and bought a new ring, again filming the scene for the camera.

The second attempt was successful and the couple is now engaged.

They posted videos of the two marriage proposals on TikTok, which now count millions of views, with Gerii Ashforth calling them “crazy”.

The 27-year-old said the owner of the lake house was “happy that we came back and tried to find it – he’s willing to help us”.

In any case, they haven’t given up hope of finding the ring – they’ve already contacted friends with underwater metal detectors with Ross Bamber joking: “We might have to call in a diver after all.”