China: Dummy US warships used as targets in missile exercises

The Chinese military has built models in the shape of a U.S. Navy aircraft carrier and other U.S. warships, possibly using them as training targets in the Xinjiang Desert, as satellite images of Maxar showed on Sunday.

This development reflects China’s efforts to develop its ability to strike aircraft carriers, particularly the US Navy, as tensions remain with Washington over Taiwan and the South China Sea.

According to Reuters, satellite images showed that a full contour of an American aircraft carrier and at least two Arleigh Burke-class guided missiles had been built on what appears to be a new target range complex in the Taklamakan Desert.

The images also showed a 6-meter-wide rail system with a ship-sized target mounted on it, which experts say could be used to simulate a moving boat.

The group has been used to test ballistic missiles, the US Naval Institute said, citing geopolitical intelligence company All Source Analysis. 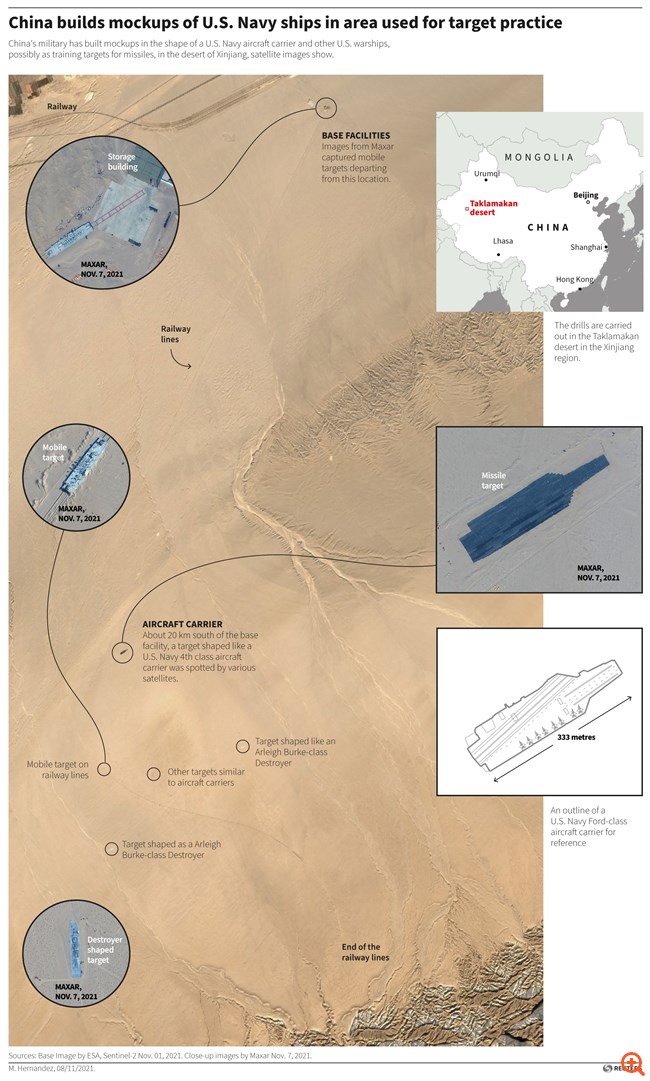 According to the Pentagon’s latest annual report on the Chinese military, PLARF carried out the first confirmed live-fire launch in the South China Sea in July 2020, launching six DF-21 ballistic missiles against ships in the waters north of the Spratly Islands. where China has territorial disputes with Taiwan and four Southeast Asian countries.

Experiments at sea may have shown in China that they are “still a long way from creating an expensive ASBM,” said Collin Koh, a researcher at the S. Rajaratnam School of International Studies in Singapore. “I do not think the targets in the desert will be the final stage. It is intended for further refinement.”

A test of ballistic missiles against ships in the desert would not reflect the realistic conditions of a marine environment, which could affect the sensors and targeting, but would allow China to conduct the tests more safely, Koh said.

The luxurious residential complex in the center of Kolonaki: The revival of the unique Architecture project

Deloitte is building the human resources of the new digital age

UN Headquarters in New York sealed off by police

Get out the tissues! Romantic classic ‘One Day’ returns to Netflix as…

Derek Black Dec 2, 2021 0
Get out your box of tissues and prepare to spend an afternoon in tears, because Netflix has confirmed the…

Dec 2, 2021
The final act is yet to come. The official account of Peaky Blinders has shared a little glimpse to remind us that…

Dec 2, 2021
CCXP Worlds 2021, the online version of one of the biggest entertainment conventions in the world, takes place…

Shut up and take all my money! Airbnb rents the house from the movie…

Dec 2, 2021
My poor angel It has become a Christmas classic. The film starring Macaulay Culkin made the generation of the 90s…

Russia warns it will react if Ukraine gets involved in US…