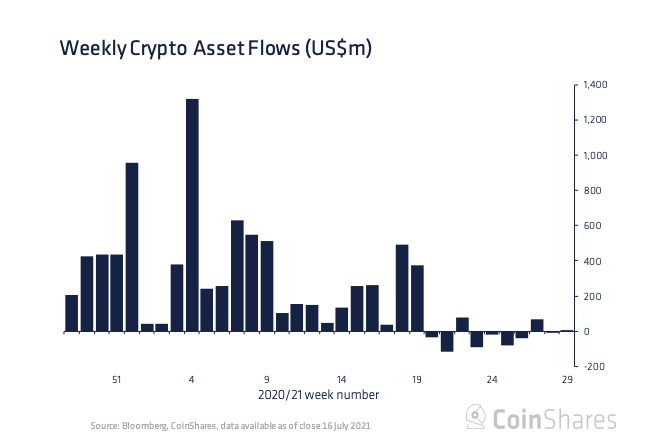 The outflow of institutional investment from BTC-based products continues to grow, according to CoinShares. This money goes to cryptocurrency funds for altcoins, primarily ETH.

According to CoinShares, analysts have seen an influx of institutional investments in cryptocurrency funds in the past two weeks. However, investors remain cautious after the markets decline. ETH-based products are the most popular – $ 11.7 million were invested in them in three weeks.

Overall, the net inflow of investment in cryptocurrency funds was $ 2.9 million for the week ending July 9, up from $ 4 million in the previous week. Financial flows have weakened after a period of strong investor demand during the BTC rally in Q4 2020.

According to CoinShares, last week there was a slight outflow of investments from Bitcoin products totaling $ 7 million, which coincided with a slowdown in trading volumes.

According to CoinShares, last week the most popular were investment products for several cryptoassets – they invested $ 1.2 million and now their share of the total assets under the management of funds is 16.5%. In addition to products on ETH, funds on BNB and ADA are popular with investors, investments in which amounted to $ 400,000 and $ 600,000, respectively.

Increased investment in altcoin products means that investors are starting to diversify their crypto portfolios and believe in the potential of altcoin markets.

According to a previous report from CoinShares, the inflow of money into cryptocurrency funds from June 28 to July 5, 2021 was $ 63 million. This was the first positive result in five weeks. Previously, analysts recorded an outflow of investments from products for cryptocurrencies.

SOS by German scientists: Warning of outbreak of coronavirus in flood-affected areas