Greek banks are being transformed, as Deutsche Bank points out in today’s report, explaining its decision to resume coverage of the entire sector, adhering, as it notes, to a constructive attitude.

Greek banks, he emphasizes, are now in the middle of a transitional period, where “inheritance” issues remain a burden, but the focus is beginning to turn to profitability.

Overall, the German bank considers that the fears for the funds are now mostly over, especially considering that the remaining efforts to “clear” the balance sheets are unlikely to significantly burden the forecasts.

Thus, the declining risk costs, with clear convergence between all banks by 2023-24, combined with the positive effect on lending, which comes from the economic growth of Greece, are the main factors supporting the recovery of profitability.

Deutsche Bank sees that the average return on RoTE equity will be around 7% in 2023, for most systemic, despite somewhat sluggish revenues. 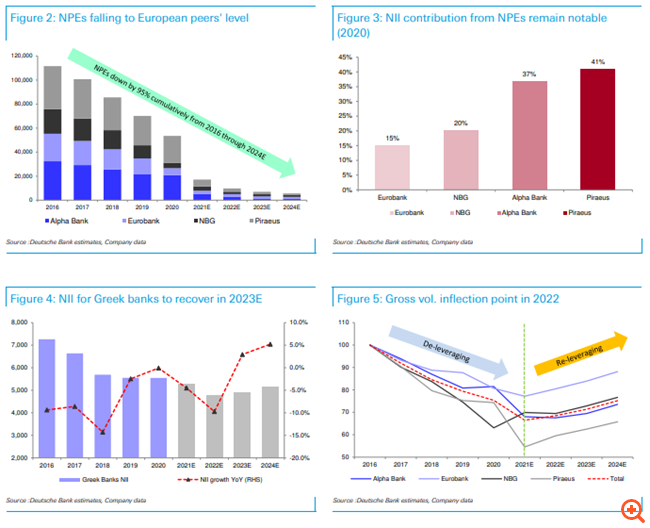 It is noted that until now, Deutsche Bank covered only Eurobank and now covers all Greek systemic banks.

As he points out, overall, he maintains a constructive view of Greek banks, although during this transitional period it is unlikely that they will have similar valuation ratios to European banks.

In its top picks it places the National Bank and Alpha Bank, as both present strong capital and coverage (especially the National) and possible good profitability, with attractive valuation indicators.

Eurobank has the most mature profile, but it is considered that this has already been valued by the market, while Piraeus Bank will probably lag behind in terms of profitability, capital and coverage and is thus fairly valued.

Asset quality has become a much smaller issue lately, Deutsche Bank notes, due to securitization and portfolio sales.

With actions already planned and limited new inflows, the NPE should be around 6% on average by the end of 2022, which, combined with the overall high levels of coverage, is expected to lead to a significant reduction of risk costs, to about 60 basis points by 2024 and then become the main “lever” for improving profitability.

In addition, most banks now have fairly “comfortable” levels of capital (except for Piraeus, especially given the significantly lower levels of coverage compared to the rest), possibly allowing the return of dividend payments relatively soon.

Increasing revenue will take some time, but will offset the cost

Underlying revenue trends are expected to improve thanks to the increase in loans (approximately 7% average annual GAGR growth in 2021-2024 on non-performing loans), however the net interest margin NII is likely to be offset by a reduction in NPEs.

However, this is unlikely to be fully offset by the strong performance of the commissions that Deutsche Bank expects for Greek banks. Thus, the cost-income ratio for Greek banks will converge to about 50% by 2024, thanks to a further increase in efficiency.

Strong performance of the Greek economy

According to Deutsche Bank, the macroeconomic environment, but also the strong housing market, is an important support for the prospects of the industry.

After almost a decade of underperformance of the Greek economy, things have begun to improve, as he points out, with its performance gradually exceeding the eurozone in 2019 (before the pandemic), but, in 2020, the pandemic weighed heavily on the Greek economy, with real GDP to shrink by -8.8% in 2020 compared to -6.5% of the Eurozone. This can be attributed to the large contribution of tourism-related industries to total GDP (over 20% before Covid), with the industry declining by more than 60% in 2020.

As a result, Greece’s GDP recovery is likely to be higher than in the eurozone, as the economy has opened up and mobility restrictions have been lifted, leading to an increase in travel.

Lady Diana’s bodyguard against Harry: “Scotland Yard protection is not for sale”

Resignation of current president would force Petrobras to form a new Board;…

Safe Bulkers Participations: Completion of disbursement of funds raised from the…

Analysis: Tight lockdowns in China could exacerbate the country’s population…

Jane Harper May 16, 2022 0
For generations, Chinese parents have made their children's success one of their main goals in life – and they…

May 16, 2022
Her health principles Of Britain investigate four other cases of the rare, viral smallpox of monkeys, as the…

May 16, 2022
The singer Dua Lipa announced that he will pass through São Paulo with his tour Future Nostalgia Tour on the…

European shares close steady after weak data from China and…

Ethanol price drops in 16 states and DF in the week, says…