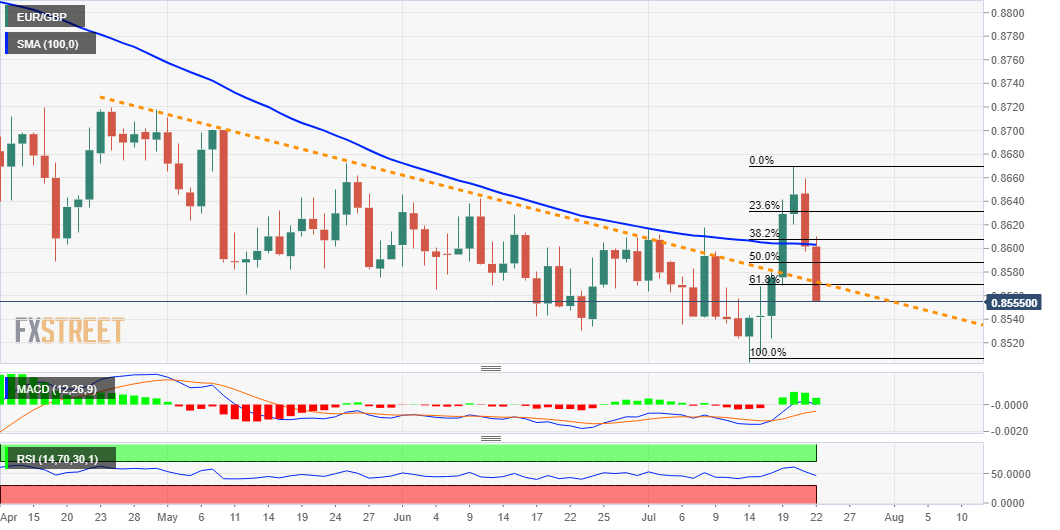 The crossing EUR/GBP extended this week’s retracement drop from nearly two-month highs and witnessed some strong selling for the second straight session on Thursday. The selling bias accelerated after the ECB announced its policy decision and dragged the cross to new weekly lows, around the 0.8555 region in the last hour.

As widely anticipated, the European Central Bank left its key monetary policy setup unchanged at the end of the July meeting and did little to provide significant boost. The ECB revised the forward-looking guidance on rates and expects rates to remain at their current levels or lower until it sees inflation hit 2% well before the forecast horizon.

From a technical perspective, the EUR / GBP cross has now fallen back below the 61.8% Fibonacci level from the strong upward move of 0.8504-0.8670. This coincided with a multi-month old downtrend line resistance break point. A sustained break below could be seen as a new trigger for bearish traders and could have set the stage for additional weakness.

The negative outlook is reinforced by the fact that the technical indicators on the daily chart have started to move back into bearish territory. Therefore, a subsequent dip towards the intermediate support 0.8535-30, en route to the key psychological level 0.8500, or the monthly lows touched last week, now seems like a clear possibility.

On the other hand, any significant recovery attempt now appears to face stiff resistance near the 0.8585 confluence region, which comprises a 50% Fibonacci level and the 100-day SMA. Sustained force beyond will shift the bias in favor of bullish traders and push the EUR / GBP cross beyond 0.8600, again to test the 0.8670 supply zone.

Beijing discovers #MeToo: pop star Kris Wu at the center of the accusations

Services PMI improves to 54.9 in July

USD / CAD stabilizes around 1.2550, seems to close for the third day in a row higher

Fire in Varybobi: What the international press says – Detailed headlines

Derek Black Aug 4, 2021 0
With the gaze turned to Athens, the international press is. Among the main topics of today's headlines is…