Former Japanese Prime Minister Shinzo Abe finally succumbed to his injuries a few hours after he was shot today during a speech in Nara (west), ahead of the election to renew the composition of the Japanese Senate which is held the day after tomorrow Sunday.

A man opened fire on Abe, 67, from behind with what appeared to be a homemade weapon while the former prime minister was giving a speech in the western city of Nara, Japanese media reported.

It is the first assassination of a sitting or former prime minister in Japan since the 1930s.

The hospital that tried to save him announced that Shinzo Abe died at 5:03 p.m. (11:03 Greek time), about five and a half hours after he was shot. A doctor said Abe died of profuse bleeding from two deep wounds, one of which was on the right side of his neck. When he was taken to the hospital, he had no vital signs.

The police announced that a 41-year-old man was arrested for the attack on Abe. According to NHK television, his name is Tetsuya Yamagami and he told police he was unhappy with Abe and wanted to kill him.

Abe was delivering a campaign speech outside a train station when two gunshots rang out around 11:30 a.m. (local time, 05:30 Greek time). Security personnel were seen pulling a man wearing a gray T-shirt and beige pants into the street. 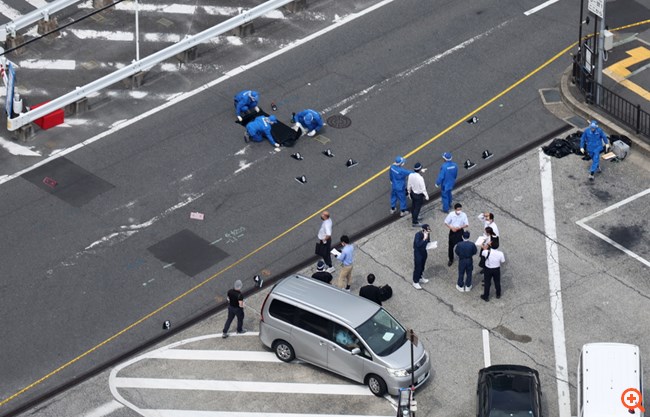 “There was a loud bang and then smoke,” businessman Makoto Ichikawa, who was an eyewitness, told Reuters. He added that the weapon was the size of a television camera.

“At the first shot no one knew what was happening, but after the second shot, special police forces threw him to the ground.”

Kyodo news agency earlier carried a photo of Abe lying face down in the street with blood on his white shirt. People were gathered around him and someone was giving him heart massages.

Nara emergency services said he had been injured on the right side of his neck and left collarbone. His brother, Defense Minister Nobuo Kishi, said Abe was receiving blood transfusions.

Kishida called the attempt on the life of the former head of government and current member of parliament of the Liberal Democratic Party (FDP) a “barbaric act” committed “in the middle of an election campaign”, stressing that elections are “the foundation of democracy” and their tarnishing “absolutely unforgivable”.

After Abe’s death was announced, Kishida said: “I was praying that his life would be saved, but I heard the news (of his death). It is truly sad. I am at a loss for words. I offer my sincere condolences and pray for his soul.” may he rest in peace,” a very emotional Kishida told reporters.

Japan’s prime minister also said that now was “not the time” to discuss the implementation of the weapons policy.

Japan’s gun laws are among the strictest in the world. Due to very strict laws in Japan, the number of deaths due to the use of firearms is very low in the archipelago of 125 million people. Obtaining a gun permit is a long and complicated process, whether for Japanese or foreigners, who must provide a recommendation from a shooting club and undergo thorough police checks.

After the attack on Shinzo Abe, the press offices of the parties announced that the pre-election campaign was suspended in view of the vote on the renewal of the composition of the upper house.

Mr. Abe has served as Japan’s prime minister longer than anyone else. He first took office in 2006 and held office for one year, then returned and remained in power from 2012 until 2020, when he was forced to step down for health reasons.

The US ambassador to Japan expresses “sadness” and “shock”.

The US ambassador to Tokyo, Rahm Emanuel, condemned the attack.

“We are all saddened and shocked by the bullet attack on former Prime Minister Shinzo Abe. Abe-san has been an outstanding leader of Japan and a staunch ally of the US. The American government and the American people pray that Abe-san is well, the his family and the Japanese people,” Mr. Emanuel said in a press release he released.

For his part, US Secretary of State Anthony Blinken expressed his administration’s “deep sadness and concern” at “the attempt on (former) Prime Minister Abe’s life” at the start of his remarks at the G20 summit in Bali, Indonesia, adding that “he does not know his condition” but “his thoughts and prayers” are with him.