The compensation of parliamentarians in Germany will increase by approximately 300 euros from July 1st. The chancellor’s salary exceeds, for the first time, 30,000 euros per month. 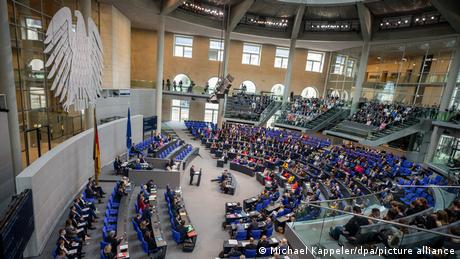 A brave increase of 300 euros a month awaits the members of the “Bundestag”, the German Federal Parliament, from July 1st. Already in April, the Speaker of the Parliament, Berbel Bass, informed the MPs that the monthly “compensation” they receive will increase from July by 3.1%. According to the German News Agency (DPA) the compensation now reaches 10,323.29 euros. The chancellor’s monthly salary will exceed 30,000 euros for the first time.

This happens because, by a decision taken by the Parliament itself, the monthly compensation of MPs is “linked to the general evolution of salaries”, that is, it essentially follows a system of automatic indexation. In addition to the compensation, MPs also receive a tax-free operating expenses allowance of €4,583.39 per month, with which they usually pay for the running costs of their political office or the rent for a second residence in Berlin if they are elected in another district.

The era of cuts is over

The bold increase comes after a long period of restraint. In 2021 the salaries of the deputies had decreased, as the same happened with the rest of the salaries, while in 2020 the elected representatives of the people themselves had declared that they were voluntarily waiving any increase, as a sign of support for the general economic hardship caused by the first wave of the pandemic. It is noted that the increases do not apply to those who are not members of Parliament. This has the consequence, for example, that the Member of Parliament and Deputy Minister of Defense Simtge Meller receives 21,604 euros per month, while the minister Christine Lambrecht herself, who has not been elected as a Member of Parliament, receives less money, namely 20,425.57 euros.

Is it a lot of money?

The Alternative for Germany (AfD) ethno-populist party had submitted questions about the increases in parliamentary compensation to the Parliament, warning that “MPs are becoming more and more distant from ordinary people”. AfD MP René Springer even states to Bild that politicians “approve fat increases for themselves, while giving pittance to workers who suffer from the constant rise in inflation.” But the Left Party (Die Linke) has also repeatedly criticized increases in parliamentary compensation. “A salary of over 10,000 gross and even with a guaranteed indexation? Most workers in this country cannot even dream of such a thing,” MP Nicole Golke said in a related debate in the Federal Parliament in December 2021.

Really, is 10,323.29 euros a little or a lot for an MP or 30,000 and something for the chancellor? Obviously it’s a matter of perspective. However, US President Joe Biden’s compensation currently reaches $450,000 per year. Not to mention the head of the Volkswagen car industry, Herbert Diess, who is paid around 10 million euros a year, including “bonuses”. As for Christian Scheving, the head of Deutsche Bank, the largest German bank, in 2021 it is estimated that his salary has hopefully reached 8.8 million euros.