Governance during the crisis – Greece is at the top

How did governments respond to the pandemic? How resilient have democratic institutions proved to be? How resilient was the welfare state? The above data were evaluated in the comparative study on crisis management and resilience in 29 countries of the OECD and the European Union conducted by the Bertelsmann Foundation and Greece is at the top of the ranking.

“Compared to other countries with the same population, Greece has avoided the worst possible consequences of the pandemic,” the report said.
Specifically, in the category “Resilience of governance”, Greece is ranked ninth among 29 countries, with a score of 7.56 out of 10. Only New Zealand, South Korea, Sweden, Denmark, Germany and Ireland have the highest score. , Canada and Switzerland. It should be noted that Finland, Austria, Japan, the Netherlands and Portugal have the lowest scores from Greece, while Estonia, Chile, France, Spain, Belgium and Turkey are below the average, among others. , the Czech Republic and the USA and in the last places are Mexico, Hungary and Poland. 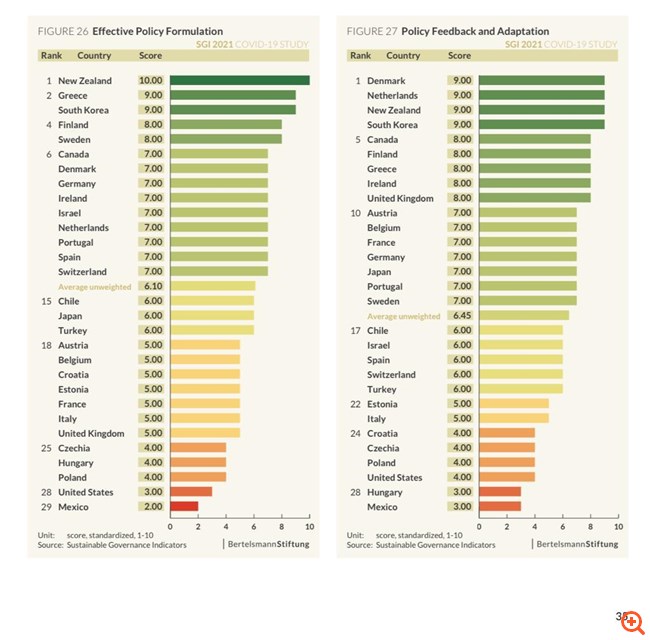 The research points out, among other things, “that in Greece there is a strong improvement in governance compared to the pre-crisis period”. It is also important that in the category of effective policy-making, Greece ranks second, thanks to the “evidence-based and expert advice of policy-making”.

In addition, the measures to deal with the crisis were announced in detail to the citizens and discussed openly in Parliament, while national coordination efforts proved smooth and sensitive to local concerns and the government responded quickly whenever cases increased. In contrast to most other survey countries, civil society organizations were informed and included in the measures, the study found.

In the category “Resilience of the Republic”, Greece is ranked eighth among 29, with a score of 8.5 out of 10 and the “particularly credible commitments to lift restrictions on civil liberties and rights at the earliest opportunity” are noted. 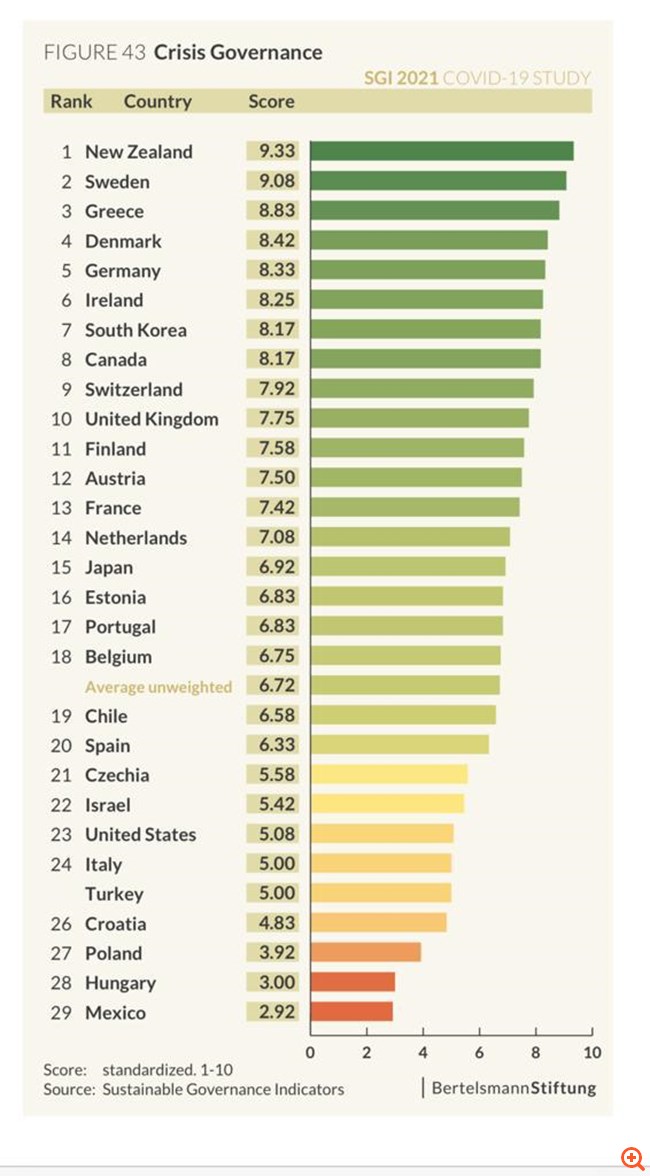 In the category “Resilience of the Welfare State”, Greece is in tenth place, with a score of 6.38 out of 10, as, as reported, “the health system was underfunded and unprepared before the crisis, but the government managed to double the number of ICU beds “.

The Bertelsmann Foundation also cites the conclusion of its study that in countries where press freedom and civil rights, the independence of the judiciary and central democratic values ​​were already eroding before the crisis, disturbing developments were further consolidated as a result of the actions taken. in the name of the battle for the coronavirus crisis. 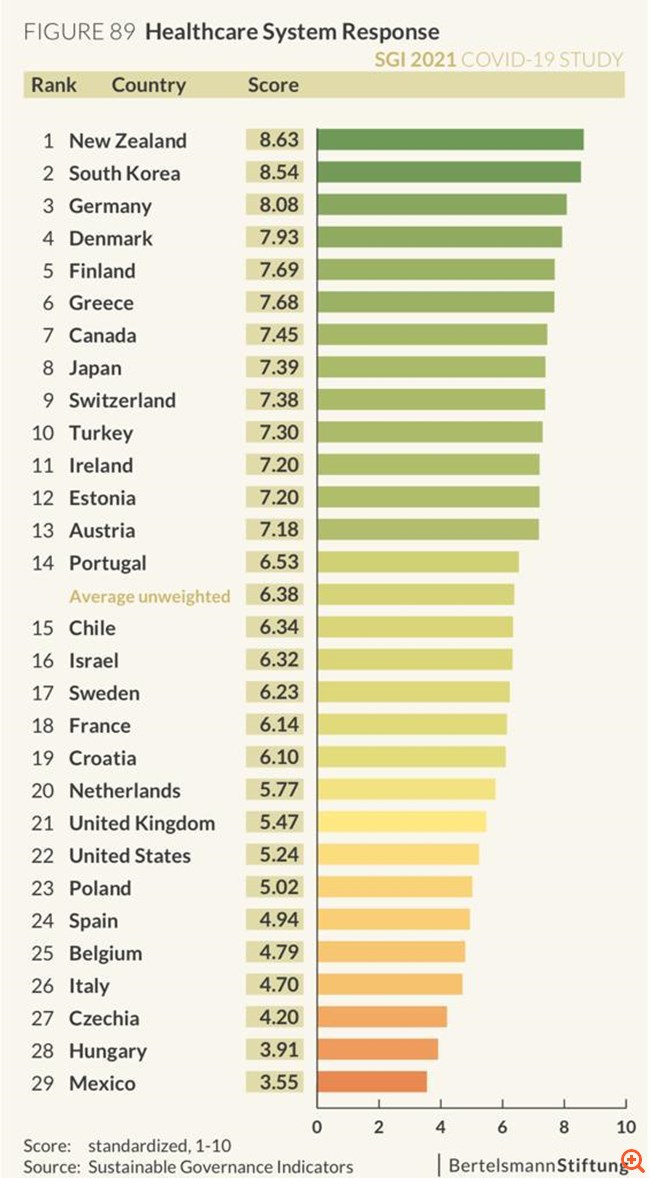 Countries that were considered democratically resilient, he adds, have proven capable of demonstrating resilience even in times of crisis. It is characteristic that Greece is in the eighth place in the resilience of democracy in countries that “managed to show a high degree of credibility in terms of the proportionality of restrictions on freedoms.”

It noted that in Turkey, Hungary, Mexico and Croatia, “efforts to curtail key democratic institutions continued during the crisis, while pressure on media professionals increased significantly.”

Government officials stressed that “not a day goes by that SYRIZA and Mr. Tsipras have not complained to the government about how to manage the pandemic. Ignoring what is happening around the world and in the absence of a political proposal, they have made the pandemic a major opposition weapon. The image that exists in the rest of the world for Greece is completely different “.

KINAL elections: The favorite N. Androulakis and the hopes of G. Papandreou for overthrow

USA: Woman is charged after threatening to bring gun to school if masks were…

The Rafale that arrived, the flights of John and the eruption of the volcano in…

Derek Black Jan 22, 2022 0
These are some photos that capture the most important events that happened in the past few days from one end of…

Peru: The shores continue to be cleaned of oil

Jan 22, 2022
The refinery is in full swing, after a large amount of oil spilled on its shores Peru, as reported by the Spanish…

Jan 22, 2022
The story of an immigrant worker at Beijing that stuck COVID-19 while searching for his missing son, which took…

Afghanistan: Taliban threaten Afghan NGO workers with death if they do…

Jan 22, 2022
The religious police of Taliban threatened to open fire on women working for non-governmental organizations in a…

Jan 22, 2022
The Jay-Z, Meek Mill, Kelly Rowland and Killer Mike is among the stars who argue that a change in its legislation…
Prev Next 1 of 7,947
More Stories

Germany: The minimum hourly wage will increase to 12 euros…

Italy: The 16-year-old daughter of a Spanish diplomat…