How likely is a Russian nuclear strike? – Deutsche Welle’s analysis

“I want to remind those who make such statements against Russia that our country has means of destruction, in some cases even more advanced than those of NATO countries. If our territorial integrity is threatened, of course we will protect Russia and our people with all the means at our disposal.” This declared a few days ago the Russian president declared in his speech. Vladimir Putin’s announcements this week froze the world.

They followed corresponding statements of the former Russian president and vice-president of the Security Council of Russia Dmitry Medvedev.

Putin accuses the West of nuclear blackmail and leaves no doubt about his resolve. “It’s not a bluff,” he said. The use of nuclear weapons is not a new threat. Only this time it is accompanied by the mobilization of some 300,000 partially conscripted Russian army reservists. 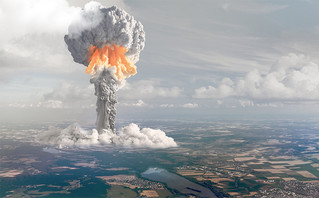 Retaining over 6,300 nuclear warheads, Russia has the largest nuclear arsenal on the planet. Of the NATO partners, only the US has 5,800 nuclear warheads, France 300 and Great Britain 215. The fact is, however, that there are no more precise figures for numbers, because the nuclear programs of each country remain secret.

For its part, Germany is participating in the prevention of nuclear holocaust with Tornado fighter jets of the German Air Force, which are stationed in Büchel, Rhineland-Palatinate. In an emergency, German Luftwaffe pilots could drop American nuclear warheads from these planes, something they practice once a year. In addition to Germany, the Netherlands, Belgium and Italy also participate in the NATO nuclear deterrence program. The decision to use the US nuclear bombs located in these countries would be made by the US president.

What are the chances of a nuclear strike?

Since 2014 and the annexation of Crimea to Russia, Vladimir Putin has repeatedly invoked his country’s nuclear arsenal. Relatively more likely would be the use of so-called tactical nuclear weapons, with a relatively low explosive range – about one-fiftieth of the nuclear bomb that destroyed Hiroshima. However, B. Richter doubts whether such a thing can really happen.

“Russia would become the pariah of the world, it would be left all alone. THE Putin he would lose all his allies, including China”, he notes, considering the scenario of a nuclear war unlikely. A few days ago, however, US President Joe Biden sent a clear message to Vladimir Putin via the CBS network: “Don’t do it! Such a move would change the face of warfare like nothing else since World War II.”