HSBC: Stay away from stocks – When to return and why

Withdraw from your stock positions and return to the markets later in the year, HSBC advises investors, as the risks have increased. All of HSBC’s key indicators point to a slowdown in growth in the second and third quarters and therefore remain underweight in equities and high-yield corporate bonds, while maintaining the overweight stance in developed market government bonds and investment grade corporate bonds. At the same time, it lowers the year-end target for the S&P 500 to 4,450 points (from 4,900 points before), given the strengthening of headwinds in valuations.

More specifically, as the British bank notes, all its macroeconomic indicators continue to be negative. Two things are crucial:

1. Its indicators show a serious slowdown in global growth dynamics in the second and third quarters. This is not a story of 2023, but of “today”.

2. Who are the main guides? HSBC sees a number of negative factors by the end of the third quarter / beginning of the fourth quarter leading to a slowdown in activity.

Rising prices from last year and partly this year continue to lead to lower economic and climate indicators.

The tightening of economic conditions in recent months also indicates that the ISM index will be below the level of 50. Whether this tightening comes from the fall of shares, wider credit spreads or the expectations for a tighter monetary policy – it is clear that a Such a deterioration in financial conditions plays a crucial role in the trajectory of the macroeconomic scenario (and much more so than in the bursting of the dot-com bubble).

The aggressive attitude of central banks is not positive for growth – in fact, the sharp rise in interest rates worldwide is likely to further exacerbate the slowdown, according to HSBC.

However, the question is: will the big central banks – especially the Fed – react to the slowdown in the summer?

HSBC believes this is highly unlikely, especially in the US, where services sector inflation will remain high in the coming months, forcing the Fed to take a neutral stance during the summer months. 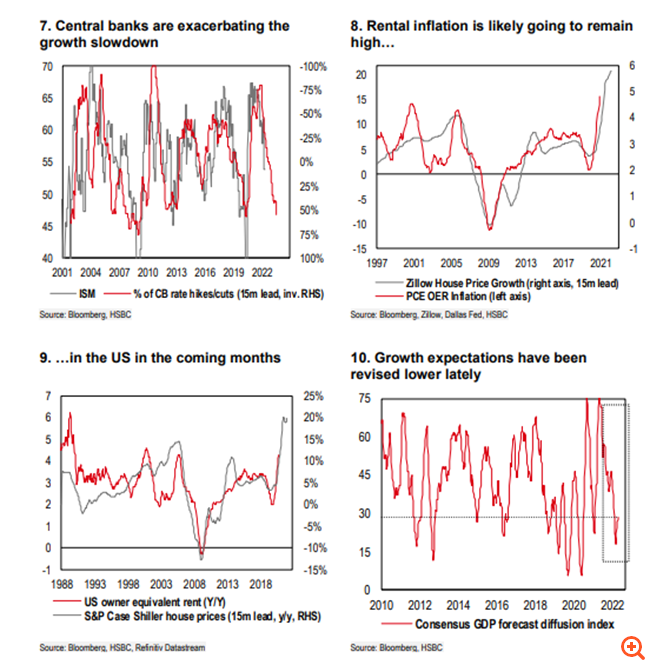 Risks to growth have been underestimated

The additional “headache” is that this time we are not only facing a potentially serious slowdown in dynamic growth, the bank explains. A shock to real interest rates has also shaken markets and the economy, especially in the US. From the market point of view, this crucial question is therefore: will the growth shock or the real interest rate shock be the main “lever” of the markets in the coming months?

According to HSBC, growth risks have been underestimated so far. In other words, he believes that in the next two months we will see the growth shock dominate the real interest rate shock. Part of this is because growth risks have been little taken into account so far. Essentially, earnings reviews have exceeded 50% in the US in recent weeks, and this is due more to the cyclical sector than to the defense sector – despite the clear signs of a slowdown in activity.

Another factor is because the higher the real interest rates, the more the stock valuations will be burdened. Thus, economic conditions will “tighten” even more, and eventually this will further aggravate the risks to growth. In turn, this puts a “limit” on how fast central banks can move without causing a complete recession and even more serious sell-offs on risk assets.

Underweight in stocks – Where will the S&P 500 go?

Overall, then, HSBC continues to be defensive and underweight in high-yield equities and corporate bonds, and overweight in developed government bonds and investment grade corporate bonds. It maintains its underweight stance on core eurozone bonds against the core and reduces its neutral stance on Japanese bonds and upgrades its stance on British government bonds to overweight. In equities, it is underweight in the eurozone, UK and Japan roundabouts over the US and prefers the Emerging Markets in the coming months,

All of the above also means that stocks are unlikely to fully recover from the losses they have had since the beginning of the year. Thus, it revises its forecast for the S&P 500 at the end of 2022 to 4,450 points from 4,900 points before, and in this environment, it still prefers defensive stocks.

The “signal” for return

“Given this rather bleak outlook, we must also ask ourselves what are the signs we are watching to return to risk assets,” HSBC said.

In terms of fundamentals, there are a number of reasons that could turn things around for the better for risk assets. These include a lower US dollar, more stimulus measures in China, positive surprises in economic activity, lower growth expectations and a pause in interest rate hikes. However, these are unlikely to come before the fourth quarter, as the British bank concludes.

Eurozone: Preliminary annual inflation shoots up to 8.6% in…

Applied Materials: Estimated for reduced profits as the problems in the production of microcircuits will continue

GBP/USD: Bearish momentum could be running out of steam – UOB

NZD/USD slumps to two-year lows and looks vulnerable below 0.6200

Movements around 810 units on the Stock Exchange

Losses in the euro markets at the beginning of the third…

Goldman Sachs: The investment strategy of the third quarter…