I found a working pixelated password decoder on GitHub. Magic?

Some people still hide their passwords and other important information in screenshots with the usual pixelation effect built into many popular screenshot tools. However, this method is not secure and there are utilities that can decrypt the private text. I will talk about one of these in this article.

Previously, such utilities already existed, they even wrote news about them on the site. But they were extremely inefficient and difficult for ordinary users. For this reason, it simply did not make sense to consider them as something serious.

Recently, another free and open source program has appeared – Unredacter. And I decided to give her a chance by testing in various scenarios.

The program allows you to generate text with pixelation and immediately start decoding it. This feature has no practical application, but it allows you to get acquainted with the principle of the program and evaluate its effectiveness.

To do this, enter the text in the lowest field and click Redact me. Then click the Start button at the very top. As soon as there is a 0 in the Score field, the result in the Best Guess line can be considered final.

Deciphering your own screenshots is a little more complicated – this requires you to open or add text in an image editor (for example, GIMP or Photoshop), and then apply a mosaic effect. The size of the mosaic block is important to consider. First, if it is too small, the program will not be able to decrypt the text. Secondly, it must be manually written in the program code if it differs from 8. 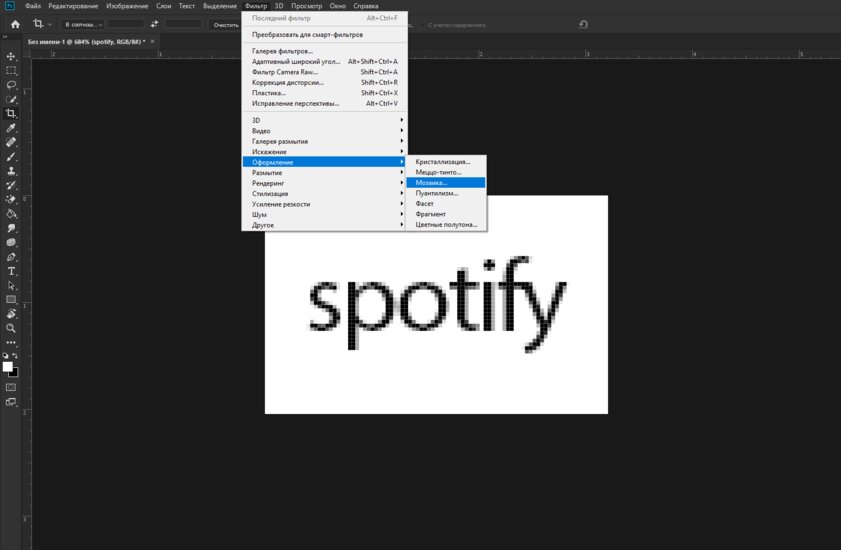 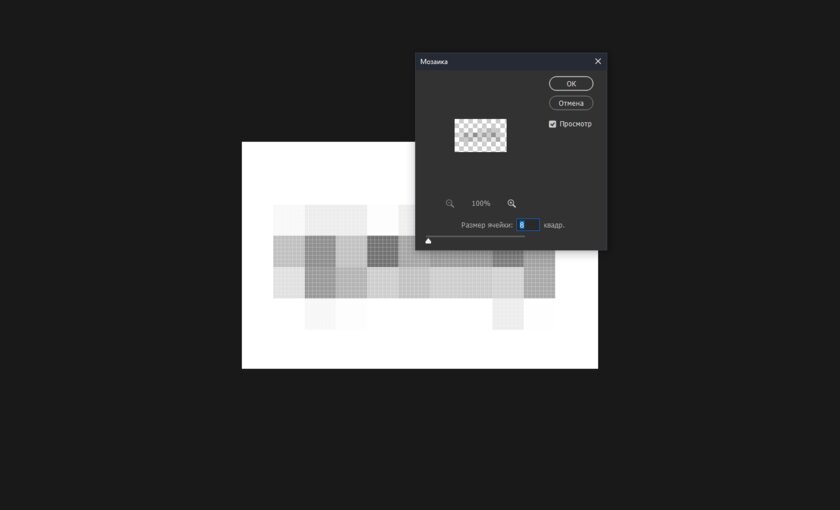 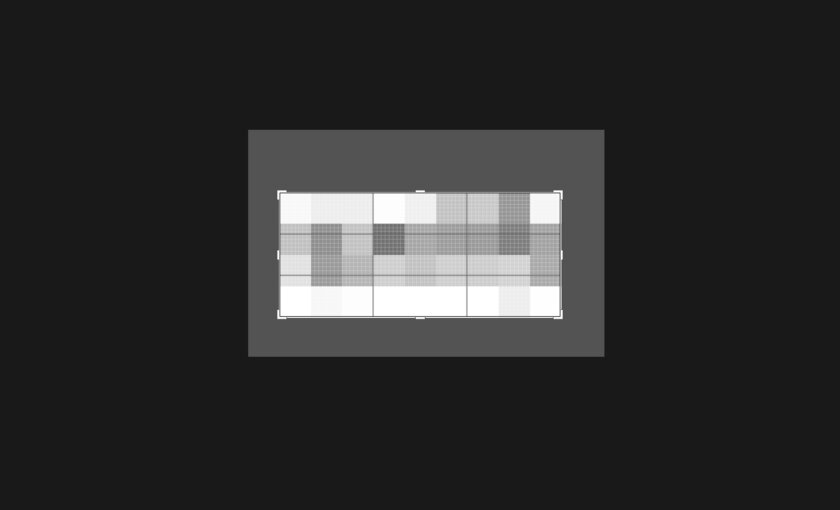 It is also required to crop the image to the borders of the pixelated text, leaving no part of the background and other objects. The size of the picture must be small, otherwise the program will break. For example, the program generates screenshots about 120 by 50 pixels in size. You can take these parameters as a basis and slightly change depending on the length of the text. The creator of the application advises to correct in addition the overall brightness of the image.

As a result of testing, I received the following conclusions.

On the generated examples, the accuracy of the program is surprising, although sometimes the utility still makes mistakes. Also, Unredacter with basic parameters does not know how to decipher uppercase letters and works fine only with uppercase. 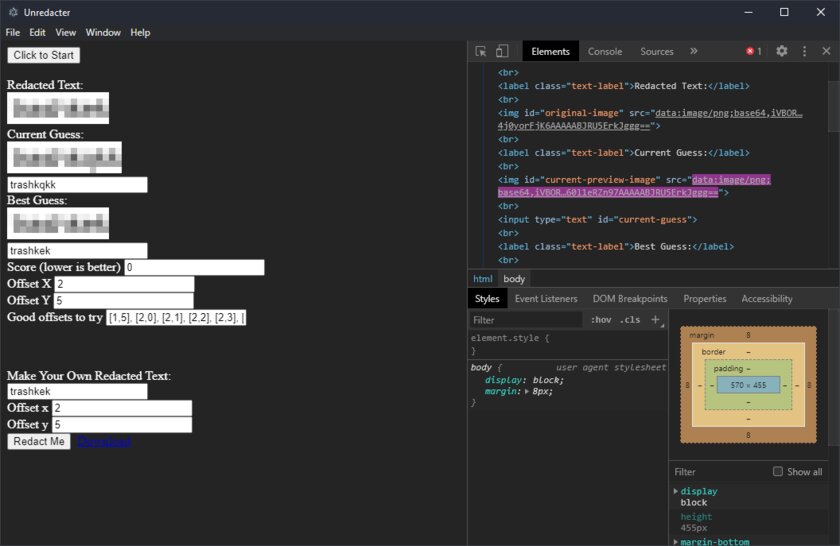 On images edited in Photoshop, the program performed much worse. Even on short examples of 1-3 letters, she made mistakes and stopped working before reaching the end. It is worth noting that the pixel pattern was identical to what the program generated. She tries to guess the letters, but has never been successful.

With the generated text of three letters, the program coped in 6 minutes, and with longer texts, the work time reached 10-20 minutes.

Google Play has information about compatibility with user…

Russia may authorize the use of cryptocurrencies for…

How to run on your own

Unredacter is quite easy to use, although there is something to strive for – the interface is as austere as possible, and uploading your own images for decryption and setting parameters takes a little work.

First, you need to install node.js on your computer. The JS code runtime is available for macOS, Windows, and Linux. The installation process is simple and does not require additional explanations – just download the installation file from the site, run it and follow the instructions. 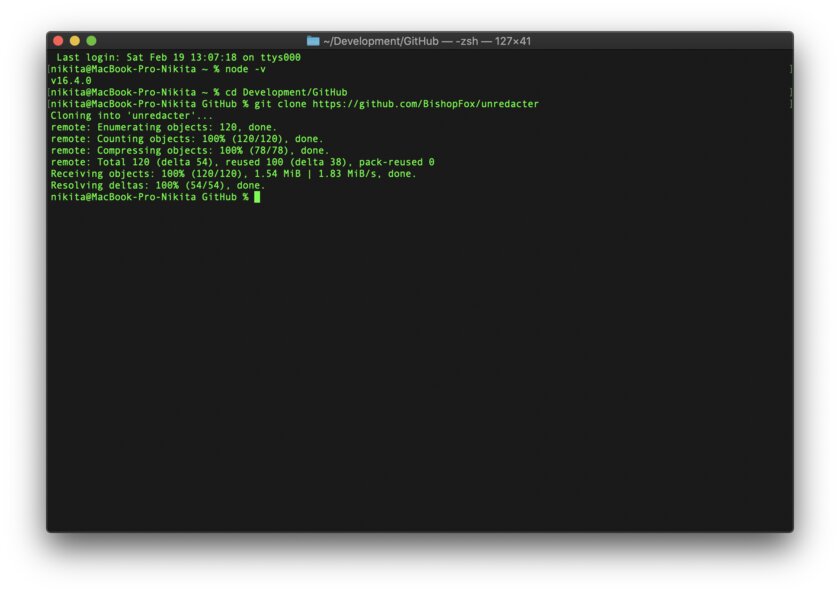 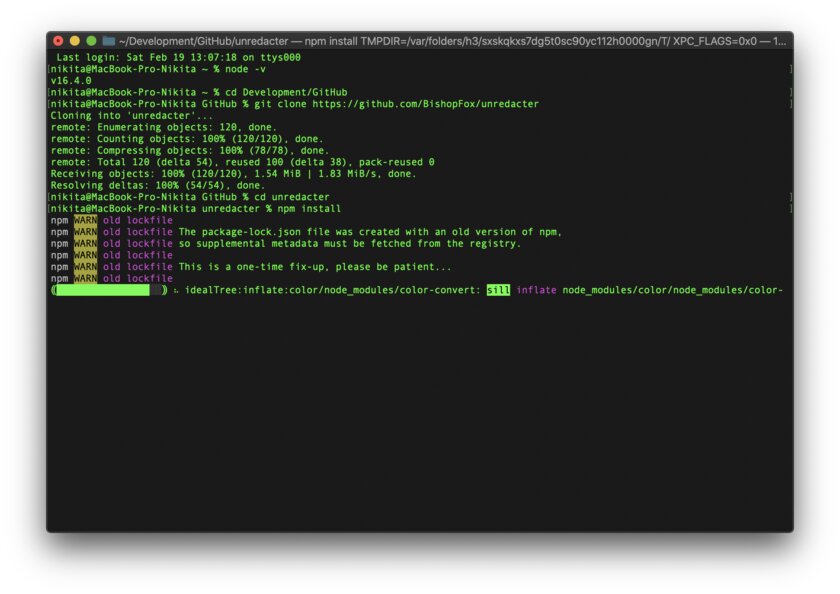 Next, you need to download the source code of the program from GitHub, install the dependencies (the modules required for operation) and run.

The first step is performed by the command below. It is enough to enter it in the terminal or command line, first going to the directory with the downloaded utility.

After automatically installing all the necessary modules, run the program with the command:

A utility window will open shortly, in which you can work. 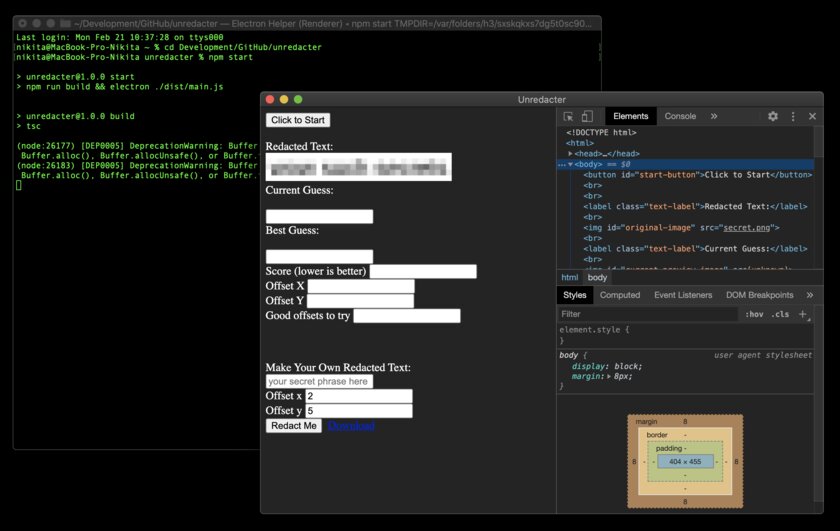 To decode your own image, create it using the method described in the second paragraph of the article, and then save it in PNG format with the name secret. Move it to the root directory of the program, replacing the existing file. In the src folder, open the main.ts file and replace the value in the line const blockSize = 8if the size of the block (in pixels) on the image is different from 8. Save it and only after that run the program, and then press Start and wait until you get the result.

If you want to try to decrypt more than just uppercase characters, add the required character set to the preload.ts file located in the src folder. The required line looks like this:

As a result, the program guesses only the texts generated in it, so its usefulness is reduced to a minimum – I could not decipher the manually created images, no matter how I processed them. “Magic” did not happen, and although it is easier to use than analogues, its effectiveness is low.

Elon Musk’s ally resigns from Twitter’s board, but company refuses

Derek Black May 28, 2022 0
The Greek authorities are on alert, after attacked by two Greek-flagged tankers in the Persian Gulfwith the Guards…

May 28, 2022
The governor of Ukraine's Luhansk region, Sergei Gaidai, said today that there were about…

May 28, 2022
The Bolivarian Alliance for America (ALBA), a union of 10 Latin American countries founded by…

May 28, 2022
President Anastasiadis sent a letter to the Turkish Cypriot leader on May 19th, in which he…

May 28, 2022
Hundreds of Lithuanians are donating money to buy a sophisticated military drone to support…
Prev Next 1 of 13,718
More Stories