Ideal is proceeding with the issuance of a Joint Bond Loan of up to 33.3 million euros through Eurobank, in order to finance the acquisition of Byte, for which a public proposal is already underway, which will be completed on September 19-21.

The duration of the loan will be four years.

More specifically, according to the announcement:

“The company “IDEAL HOLDINGS A.E.” (hereinafter the “Company”), in accordance with article 17 par.1 of Regulation (EU) no. 596/2004 of the European Parliament informs the investing public that in the framework of the Public Proposal submitted by the Company for the acquisition by the Company of 100% of the issued shares of the company “BYTE COMPUTER ANONYMI VIOMICHANIKI KE EMPORIKI ETERIA”, with the distinctive title “BYTE A.V. .EE”, the Company decided to issue a joint bond loan (in accordance with the applicable provisions of Law 3156/2003 and Law 4548/2018) from EUROBANK SA up to the amount of thirty-three million three hundred thousand ( 33,300,000 euros), secured in rem, for the purpose of financing the consideration payable in cash of the Public Offer as well as the total liquidation amount borne by the Company in favor of EL.K.A.T., regarding the registration of the shares of BYTE A.B.E.E that will be offered.

The duration of the loan is four years with the right to prepayment without penalty. The bond lender Bank EUROBANK SA was appointed as Bond Lender, Bond Holder Representative and Organizer.

The timetable for the introduction of the new shares by AMK to A.A.

The Anonymous Company with the name “IDEAL HOLDINGS AE” (hereinafter “IDEAL HOLDINGS”) (the “Company”) announces that from 08.08.2022 it makes available to the investing public the Exemption Document of the same date drawn up by the Company in accordance with delegated Regulation (EU) 2021/528 to supplement Regulation (EU) 2017/1129 of the European Parliament and of the Council of June 14, 2017 regarding the minimum information to be contained in said document, the which must be published, due to the Company’s exemption from the obligation to publish a prospectus, for the public offering in Greece and the subsequent listing for trading on the Regulated Market of the Athens Stock Exchange (the “ATH”), in the context of a takeover bid exchange, 6,288,293 new, common, registered, voting shares, with a nominal value of €0.40 each (the “New Shares”) of the Company by virtue of the decision of the Extraordinary General Meeting of 25.07.2022 of its shareholders, which will come from the increase of its share capital by a contribution in kind (the “Share Capital Increase”) of the company’s shares under the name “BYTE COMPUTER INDUSTRIAL AND COMMERCIAL COMPANY” (the “BYTE”) , as a consequence of the submission of an optional public proposal by the Issuer to the BYTE Shareholders from 01.07.2022 (the “Public Proposal”) in accordance with the terms and information presented in the Voluntary Public Information Bulletin approved by the Board of Directors of the Capital Market Commission from 04.08.2022 Proposal.

With the 25.07.2022 Extraordinary General Meeting of the Company’s shareholders, it was decided to increase its share capital up to the amount of €2,515,317.20, with the issuance of 6,288,293 new common registered, with voting rights, shares with a nominal value of € 0.40 and a sale price of €4.15 each, with the possibility of partial coverage thereof, in accordance with article 28 of Law 4548/2018, in the context of which, in accordance with article 26 par. 1 of Law 4548/ 2018, and in the absence of a contrary provision in the Company’s articles of association, there is no right of preference in favor of its existing shareholders, as the entire new share capital will be covered by a contribution in kind of shares of BYTE, in favor of its shareholders, who will legally and validly accept the Public Offer based on the exchange ratio of 0.397590 New Share of the Company for one share of the Public Offer (“the Exchange Ratio”).

2 The above Share Capital Increase is subject to the acceptance of the Public Offer by at least 70% of BYTE’s shareholders. Assuming the acceptance of the Public Offer by all BYTE shareholders, the Company’s share capital after the above Share Capital Increase will amount to €15,105,420.80, divided into 37,763,552 common shares, after voting rights , shares, nominal value €0.40 each. The total difference between the nominal value and the sale price of the New Shares, amounting to €23,581,098.75, will be credited to the Company’s equity account “Difference from the issue of premium shares”. The New Shares will be admitted to trading on the Main Market of the Regulated Market of the A.H. Below is the estimated schedule for the listing of the New Shares on the Main Market of the AXA Regulated Market: 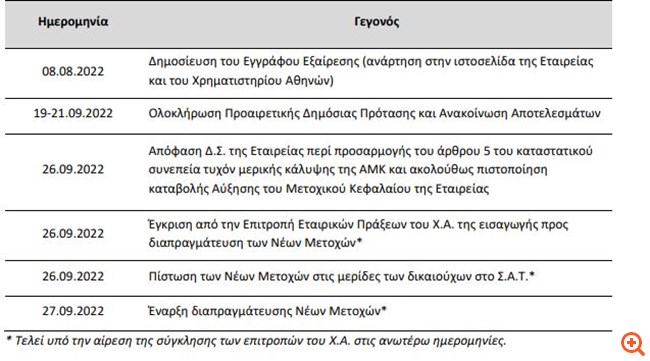 It is noted that the above schedule depends on several uncontrollable factors and is subject to change. In this case, the investing public will be informed with a relevant announcement from the company.

Italian from Japan in Russia. What is it like to own an Alfa Romeo 147 GTA now?