Indonesia: I overturned corpses and found my daughters – Shocking 36-year-old who also lost his wife in the fight

Shocks the personal drama of Andy Harijado who he lost his two teenage daughters and his wife in football tragedy that occurred last week in her field Indonesiawhere hundreds of people were trampled.

The match of local football club Arema FC last Saturday was a special occasion for football-loving Andy’s family, even for his 2-year-old son.

In the packed stadium of Malang in East Java, Indonesia, they unfolded scenes of chaos when the police fired tear gas to disperse the angry fans who had entered the pitch at the end of the match.

Authorities have announced that the death toll stands at 131.

Although Andy and his family remained in the stands and he was holding his son in his arms, he was separated from his wife and daughters, but managed to reach the medical team that had rushed to help.

“They should never have tear gassed the stands because the episodes unfolded on the playing field” says the 36-year-old farmer.

When the smoke cleared, Andy began searching for his wife and two daughters overturning the corpses of spectators who had been trampled in their attempt to escape from the stadium exits, some of which were locked. 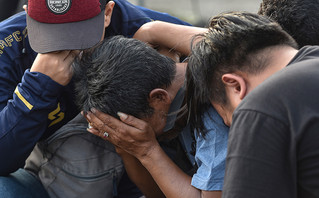 “I continued to search among the corpses and then I found my daughters, Natasya and Naila. I was desperately looking for their motherhe continues and adds that his 34-year-old wife was initially injured but later succumbed to her injuries at the hospital where she was taken.

According to authorities, 33 of the victims were children between the ages of 4 and 17.

“I will never watch a football game again. Now all I think about is my son and I have no time for anything else. Now what is important is how to secure food for the next day,” he concludes.

The government, as reported by APE-MPE, will compensate each family of the victims with 3,287 dollars while today the country’s president Joko Widodo arrived in Malang, who will first visit the city hospital where the injured have been transferred and then the stadium in Kanjuruhan.