INEMY-ESEE: The degree of satisfaction of the companies from the institution of ‘Black Friday’ is low

More than 2 in 3 companies (68%) stated that their sales during this year’s Black Friday are at the same or lower levels compared to a typical period of November, according to a survey conducted by the Institute of Commerce and Services (INEMY) of the Hellenic Confederation of Commerce and Entrepreneurship (ESEE).

INEMY-ESEE, for the sixth consecutive year, investigated the participation of commercial companies in Black Friday and evaluated its main characteristics, conducting a survey of a random sample of 250 companies in the industries that make discounts.

This year’s “Black Friday” discounts show that most of the companies participated (56%), with the interest growing (Chart 1) compared to the pre-Covid-19 period (corresponding survey 2019), when 46 had participated % of businesses. 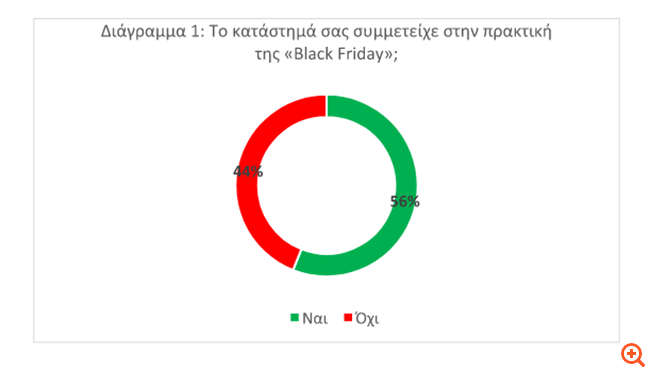 However, the 2019 survey had revealed the intention of retail companies to stimulate their participation in the practice of “Black Friday”, as this action is gradually becoming an institution, inevitably following the policy of large chains. The vast majority of companies (87%) have participated more than twice (Chart 2). 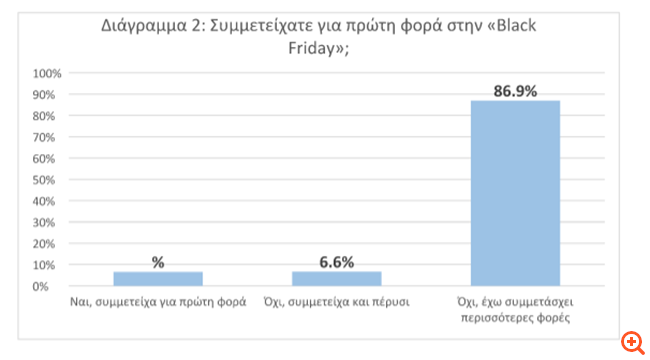 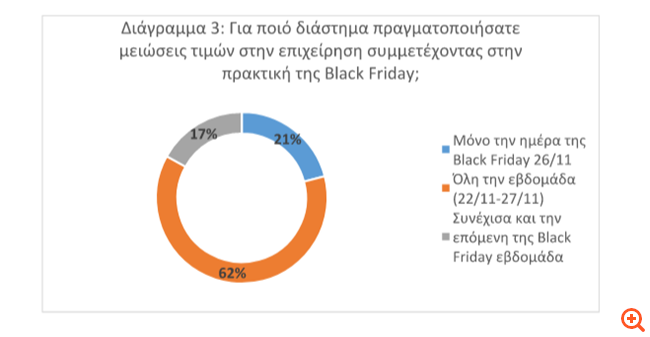 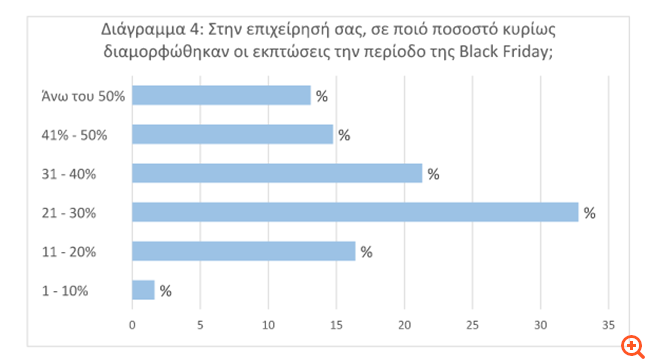 The percentage of companies that have made particularly attractive price reductions seems to be lower than in other discount periods in the past. This is mainly due to the particularly strong pressures that have been exerted on the retail trade due to the increase in energy prices but also to the operating and acquisition costs of goods.

The degree of business satisfaction with the institution of “Black Friday” is low, more than 2 in 3 companies (68%) stated that their sales are at the same or lower levels compared to a typical period of November (Chart 5 ). 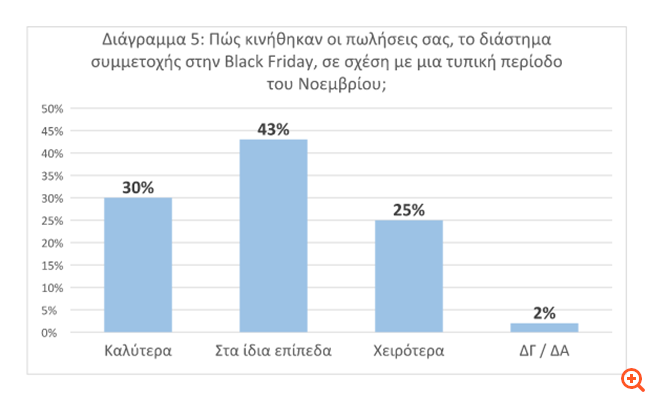 This trend raises critical questions about the actual imprint of this practice on turnover.

The losses recorded by the smaller retail companies are also shown by the fact that 44% of the companies adopted discounts on all products, while 20% in most of the new receipts of the current period (season) (Chart 6). 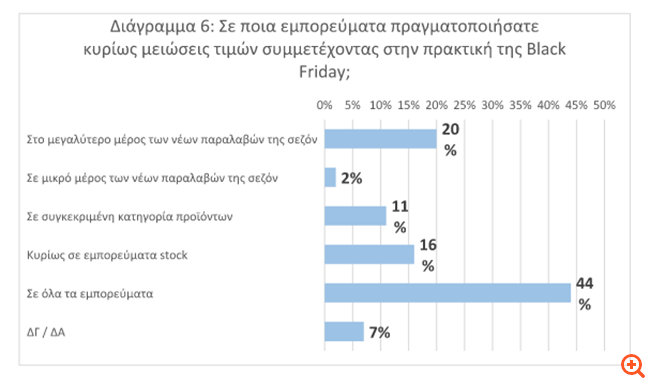 The majority of companies (87%) proceeded with some kind of promotion for the specific period as compensation for the more expensive advertising actions undertaken by the largest business units. The most popular promotional activity to attract consumers to smaller companies seems to be the advertising messages in the store window this year (48%), followed by the messages on social media (23%) which are strengthened every year (Chart 7). 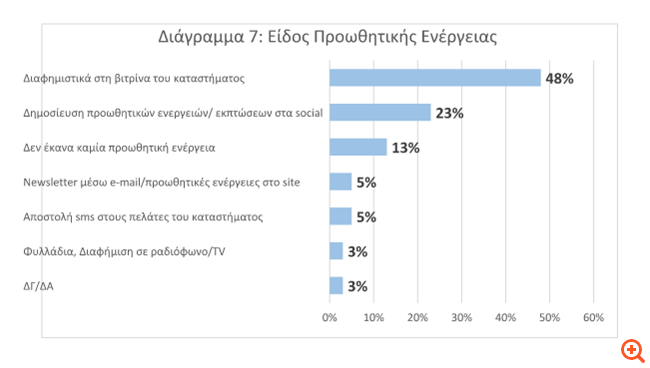 It is no coincidence that 54% of the business sample now has the ability to order electronically (e-shop, social media, e-mail, site).

Despite maintaining the practice of “Black Friday” for the sixth consecutive year, most of the smaller companies (44%) seem to evaluate this action negatively, while for 28% it leaves no particular impact (Chart 8). 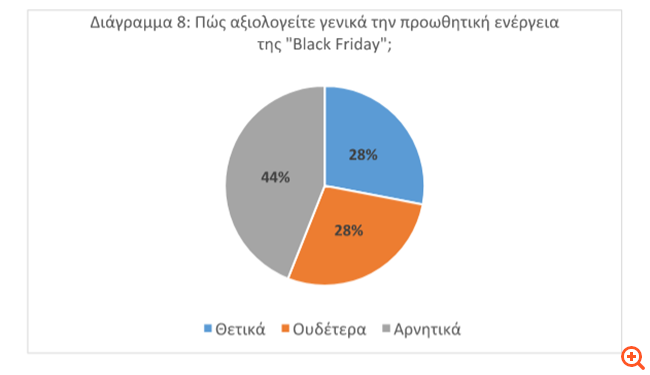 The reason for the above finding should be sought in the fact that almost 2 in 3 companies believe that the practice of “Black Friday” distracts turnover from the Christmas period to a large and moderate degree (Chart 9). 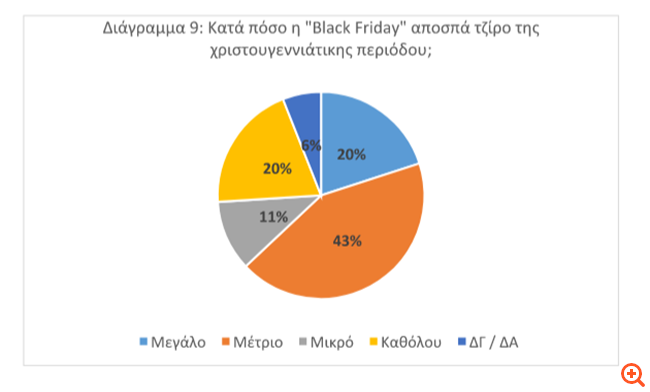 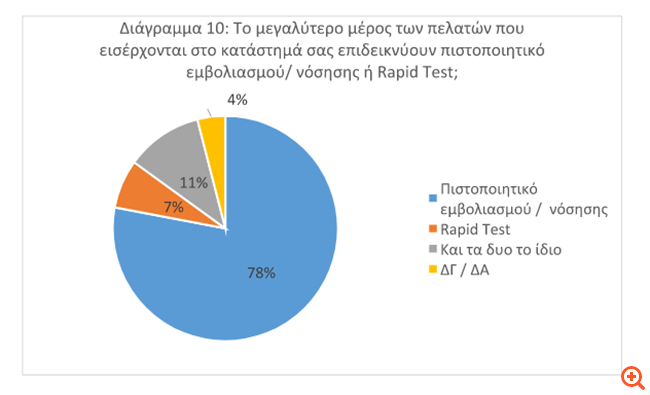 Commenting on the results of the Research of IN.EM.Y – ESEE o President of ESEE Mr. George Karanikas He said: “Immediately after the entry into force of the mandatory controls for unvaccinated citizens at the entrances of commercial stores, the market entered a narrow alley of reduced turnover and expectations. and the results of Black Friday recorded by the INEMY – ESEE Survey highlight the pressures on households and businesses in the current situation due to inflationary pressures and increased energy costs. “overflowed” and this year in “Black Week”, to act as a pillar of recovery of consumer psychology and sales of small and medium enterprises.

In short, with the exception of a few large chains and multinationals, retail has not seen a “white day” since this year’s Black Friday. Revenue for most traders was even lower than any other typical November period. The other unfortunate fact is that many unvaccinated consumers preferred to abstain from Black Friday at the physical store. However, this hit the big “players” who attracted a large portion of the buying public to e-commerce with little or no impact, with their ability to spend “thick” advertising packages on TV and internet campaigns.

Surely in the near future we should be concerned about how Black Friday will work more effectively for the benefit of all businesses and consumers. Immediately, however, the commercial world is particularly concerned, reasonably concluding that the “black mantas” of Black Friday foretell “low flights” for the decisive turnover of the holidays. We believe that this situation should mobilize the competent Ministries. The Restart Support Program, which has been unjustly deprived of the commercial world as the government has acknowledged, should not be delayed any longer. In addition, the extension of the debt repayment of the pandemic is one way, since its effects are already serious on the performance of retail in the third quarter of 2021 and are expected to significantly affect it in the first quarter of 2022 “.

Ross Ulbricht from prison to auction his NFT collection

Opinion: Polkadot has an 80% chance of growth

Michael Saylor will hod bitcoin despite the price drop

The continent’s first vaccine factory was launched in South Africa

Derek Black Jan 21, 2022 0
THE South Africa, spearhead in the battle for equal access to vaccines against it covid-19, inaugurated on…

Jan 21, 2022
US President Joe Biden's public approval rating has fallen to the lowest level of his presidency this week. The…
Prev Next 1 of 7,923
More Stories

The Central Bank of the Russian Federation proposed a ban on…