Intra-Greek rivalries in the debate on …Europe

Prime Minister Kyriakos Mitsotakis’ speech at the European Parliament had a strong pre-election flavor, as well as the debate that followed “on the future of Europe”. 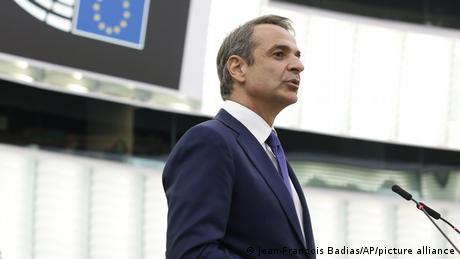 The intra-Greek feuds probably overshadowed any announcements about the future of Europe. From the very first seconds of his speech at the Plenary Session of the European Parliament in Strasbourg, the Prime Minister recalled the 2015 referendum that took place seven years ago today, on July 5. He spoke of “messages of divisive populism”, of a “gray parenthesis” and a “third, unnecessary memorandum” that followed, to point out that in contrast to all this, today “Greece is the protagonist in development, in the reduction of unemployment, the increase in investment, now freed, since August, from the regime of enhanced supervision, ready to regain investment grade”.

Manfred Weber, head of the European People’s Party (EPP), the largest political group in the European Parliament, gave credit to the Prime Minister’s policy. “After four years of Alexis Tsipras’ rule, you came to put Greece on the right path,” said the German politician, who made special reference to the fact that “Greece tirelessly protects and defends our common borders.” Looking back again to the recent past, the head of the EPP noted that “Tsipras cared more about Maduro, while we see that you care about European issues.”

The ghost of …Tsipras in the Plenary

All this probably angered the vice-president of the European Parliament, Dimitris Papadimoulis, who spoke on behalf of the European Left. “Such obsessions show that you may even see Tsipras in your sleep,” said the SYRIZA MEP, adding that “in 2009 the ND party left the country with a 15.5% deficit, huge debt, a client state and corruption, oligarchs and cronies”.

But also Nikos Androulakis, speaking on behalf of the European Socialists, recalled the high deficit that the previous ND government had accumulated. saying that “these policies have opened pandora’s box for Greece”. At the same time, the MEP – and now leader – of PASOK-KINAL, criticized the government’s handling of the “green transition” and the promotion of renewable energy sources.

Criticism of the entire material

The Greek government was criticized by the political groups of the Greens and the Liberals (Renew Europe) with an emphasis on the economic agenda, as well as the complaints about violent repatriations of immigrants, but also for the violation of the freedom of the press. The Dutch MEP of the Greens Tineke Strick pointed out: “When asylum seekers try to enter Europe from your country, their rights are blatantly violated, they are violently pushed back and even migrants are used to push back other migrants. This is Europe, Mr. Mitsotakis ?” At the same time, however, the Dutch MEP did not fail to mention that “other member states put Greece in a difficult position, denying common responsibility for asylum seekers”.

For his part, Malik Asmani, from the group Renew Europe, said that “we are troubled by the downward trend of the free press in Greece” and “we do not need to see another European leader who tramples on the free press”, calling on the prime minister to keep alive the “Greek tradition of public dialogue”. The response of Kyriakos Mitsotakis was unusually extensive, who, in his rejoinder, stated among other things: “I have printed two today’s front pages, which accuse me of being a liar and a slanderer. I invite you to look with great caution at what some NGOs publish. Does anyone here think that Chad has more free press than Greece?”

And a bit of Europe

There were very few references to the Greek-Turkish language, with the Prime Minister stating in his speech that “Greece keeps the doors closed to threats and the windows open to peaceful contacts. Disputes are resolved by international law and not by bullying”. In his rejoinder he referred to the proposal for an arms embargo on Turkey (which the European Parliament supports) and issued a warning similar to the one he had made in his speech to Congress: “Obviously every European country is free to do as it wishes with arms exports , but all European countries should take into account the reality that currently exists in the Eastern Mediterranean. The truth is that Turkey, a country that aspires to become a member of the EU, openly challenges the sovereignty of Greece.”

Not much was heard about the future of Europe in Tuesday’s debate. While, for example, Italian Prime Minister Mario Draghi in a corresponding debate in May had urgently called for the abolition of unanimity for decision-making in foreign policy, the Prime Minister of Greece did not refer to this specific issue. However, his reminder, on the occasion of the energy crisis, that an overall European plan is needed to deal with it is noteworthy. “We must have the courage and power to intervene in the markets, when they stop working” says Kyriakos Mitsotakis. In this there seems to be common ground with other countries of the European South.