On alert is Japan, as powerful Typhoon Nanmandol heads towards the country, with authorities advising nearly 3 million citizens to evacuate. In fact, thousands of people have rushed to shelters in the southwest.

The Japan Meteorological Agency (JMA) issued “emergency warning” for the Kagoshima regionin the southern part of Kyushu Island, warning residents that there is an increased risk of severe thunderstorms.

This morning 25,680 households in Kagoshima and neighboring Miyazaki Prefecture were without electricitywhile regional train and ferry services have been cancelled.

The JMA warned that the region may face “unprecedented danger” due to strong winds, large waves and torrential rain. 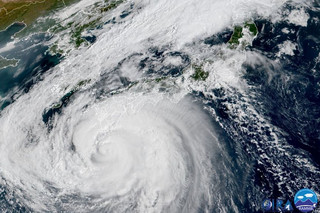 “The wind will be so strong that some houses may collapse”he added, warning of floods and landslides.

So far 2.9 million residents on the island of Kyushu have been advised to leave the area, according to the State Fire and Disaster Management Agency. Officials in Kagoshima Prefecture said more than 8,500 people had already rushed to shelters.

Kurora urged local residents to leave before the worst happens and stressed that even residents of sturdy buildings should take precautions.

“Don’t go near the windows”

“Be in strong buildings before strong winds start and don’t approach windows even from inside”he emphasized during a nightly press conference.

High-speed trains were suspended in the region this morning and state broadcaster NHK reported that at least 510 flights had been cancelled.

At 09:00 (local time, 03:00 Greek time) o Typhon it was 80 kilometers from the small island of Yakushima, with winds blowing at a speed of 252 kilometers per hour. It is expected to reach Kyushu this evening, before turning northeast and hitting Japan’s main island of Honshu by Wednesday morning.

Typhoon season reaches its peak in Japan from August to September, with heavy rains that can cause flash floods and deadly landslides.