Joint front against Russia and China by Biden and Merkel 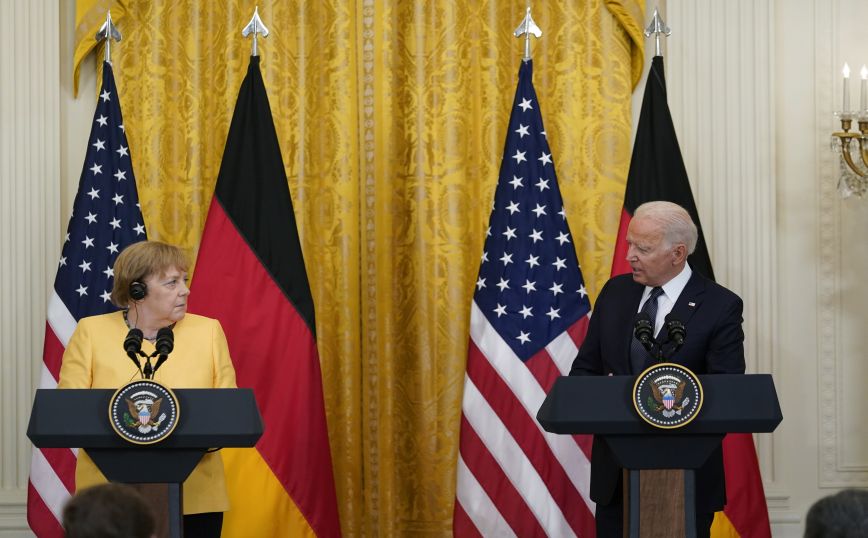 US President Joe Biden and German Chancellor Angela Merkel pledged at a meeting at the White House yesterday to work together to defend themselves against Russian aggression and to oppose China’s anti-democratic actions.

The US president has said he has reiterated his concerns to the German chancellor about the Nord Stream 2 gas pipeline, which will transport quantities of Russian deposits to the German and European markets and which Washington fears will increase Europe’s dependence on Russian gas.

In a joint news conference after the two leaders met, Biden said he and the German chancellor had agreed that Russia should not use energy as a weapon to intimidate its neighbors.

«We are united and will continue to be united to defend our NATO’s eastern allies against Russian aggressionSaid Biden.

Russia is in a race against time for the completion of Nord Stream 2 and the start of Baltic gas transportation to Germany. The pipeline bypasses Ukraine, depriving it of supplies for the passage of gas through its territory and potentially hurting its efforts to counter what Kiev and Western countries call Russian aggression.

“And while reiterating my concerns about Nord Stream 2, Chancellor Merkel and I are fully convinced that Russia should not be allowed to use energy as a weapon to force or threaten its neighbors,” he added. .

For her part, Merkel told reporters at the joint press conference that Germany, Europe’s largest economy, has different views from the US on the pipeline. However, he noted that Berlin considers Ukraine as a transit country, implying that it believes that the pipeline should continue to pass through Ukraine, even if the construction of the pipeline is completed.

The German chancellor stressed that there are a “number of tools” that Europe could use, including sanctions, if Russia does not fulfill its commitments to Ukraine regarding the pipeline.

Russia says the $ 11 billion pipeline, led by state-owned energy company Gazprom and its Western partners, will be completed later this year.

Biden said that “good friends may disagreeFor a project like Nord Stream 2 and that both leaders asked their teams to consider practical measures that countries can take on the pipeline if Ukraine’s energy security is weakened.

At the same time, the White House resident noted that both countries They will defend democratic principles and universal rights when they see China or any other country working to undermine a free and open society.

Berlin and Washington also disagree on the philosophy of working with China on business plans, with the temporary lifting of the Covid-19 vaccine patent aimed at accelerating global vaccine production and continuing restrictions on Europeans traveling to the US.

The United States and Germany are key NATO allies, but the relationship between the two countries was tested during Donald Trump’s presidency. Biden and Merkel have known and worked together for years. Both pledged to strengthen ties between their two countries.

At least 1,300 are missing in Germany after the floods

Israel is considering new restrictive measures against the coronavirus