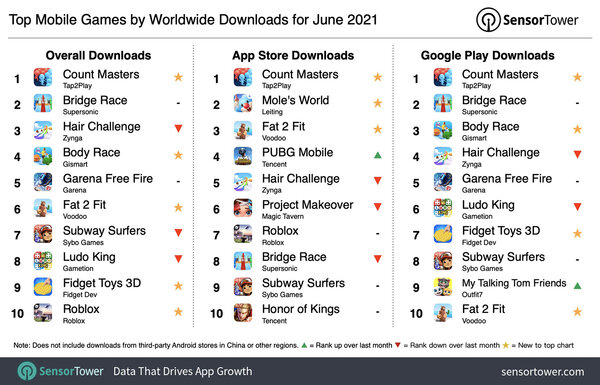 The American company Sensor Tower, which is engaged in analytics of the mobile application market, has published fresh statistics on the most downloaded content for June this year. It turned out that the record holder and the undisputed leader was the Count Masters game from the Tap2Play studio – it collected 40 million installations last month alone, taking first place in terms of the number of downloads both in the general top and among software in the App Store and Google Play. The second place in terms of the number of installs was taken by the game Bridge Race from Supersonic – it has collected 28.6 million downloads, the lion’s share of which falls on the Android platform. Closed the top five most popular applications among players Hair Challenge from Zynga Rollic Games, Body Race from Gismart and Garena Free Fire from Garena.

It is worth noting that both games should be grateful to gamers from India, because they provided 11.8% and 32% of downloads, respectively, with the United States having the second largest number of downloads. Moreover, India’s mobile apps market itself was named the # 1 market at Sensor Tower, accounting for 18.7% of total global downloads last month, equaling 840 million installed games and apps. The USA, which was previously a confident leader in this parameter, took the second place with only 9% of downloaded applications – the difference is more than two times. Probably, this was due to the technological boom that is gradually spreading to India – local users began to consume impressive volumes of content.

Also, Sensor Tower representatives said that in June 2021, the global mobile application market surpassed 4.5 billion downloads in the App Store and Google Play alone (this figure does not include third-party marketplaces). The figure is impressive, but it is 2.4% less than in June last year. Analysts note that the drop in demand is directly related to the coronavirus – in 2020, many were sitting at home, actively consuming new content, and now the situation is freer.