KPMG: Greece in 2nd place in the EU in the consumption of illegal cigarettes in 2021

Opinion: Ethereum can fall in price by another 40%

Greece remained in second place among the 27 EU member states in 2021, according to the results of KPMG’s annual Independent Report conducted on behalf of Philip Morris International.

More specifically, according to the KPMG Report:
Overall, in 2021 the EU Member States lost 10.4 billion euros in revenue due to the illicit trade in cigarettes.

– The percentage of illegal cigarettes in the EU amounted to 8.1% of total cigarette consumption.

-The illegal market in the EU strengthened mainly by counterfeit cigarettes, whose consumption increased by 19% in 2021, reaching 12.3 billion cigarettes.

According to the findings of the Report on the illicit trade in cigarettes in Greece:
– A total of 3.4 billion illegal cigarettes were consumed in 2021.

-The percentage of illegal cigarettes amounted to 23.9% of total consumption.

“The phenomenon of the illicit trade in cigarettes is not new. It has been threatening public revenues for years, but also society itself. What is more worrying is that conditions prevail – all over Europe – that can make the situation uncontrollable. “Intense inflationary pressures, rising cost of living and the consequent decline in purchasing power, are cultivating the ground for further increase in demand for illegal cigarettes”, noted Mr. Iakovos Kargarotos, Vice President of Papastratos, adding that “for more than 10 years Papastratos is at the forefront of the fight against illicit trade, supporting the competent Authorities with state-of-the-art equipment and know-how, and together with the State and society, through the common front we have created, end of cigarettes, not just legal products “.

On the occasion of the new Report, Gregoire Verdeaux, Senior Vice President of Foreign Affairs at Philip Morris International, said: “Losses in tax revenue will limit the ability of governments to invest in areas such as public safety, public services or infrastructure. , at a time when European citizens are facing very high prices on almost all basic goods, the risk of adult smokers — especially those in the lower classes — turning to illicit trade is now very high. even more urgent is the need to make new innovative tobacco products available and affordable – where they are not – so that adult smokers can make better choices instead of buying cigarettes from the illicit market. consumers, so that they do not have to turn to illegal cigarettes, which means focusing on education, raising awareness and ensuring the availability of better alternatives, such as scientifically proven innovative tobacco products. “Making them accessible as the best choice for the millions of adult smokers in Europe who do not quit smoking should be our common priority.” 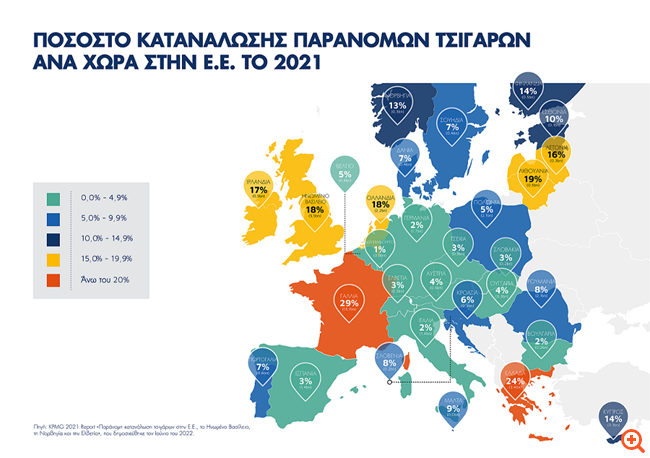 S. Michel: I am convinced that we will grant the status of candidate country for accession to Ukraine and Moldova

The painful history of the Greek car

Derek Black Jul 4, 2022 0
Its inhabitants are in a state of panic Sydney who were ordered to leave their homes as for the third day the city…

Jul 4, 2022
The US Congressional committee investigating the US Capitol invasion on January 6, 2021, has picked up…

Jul 4, 2022
Danish police said on Monday that there were no indications that the shooting that left three dead in a shopping…

Jul 4, 2022
The images that have come to light after the attack of a young man in a shopping center in Copenhagen are…

Jul 4, 2022
The "loser" in the event that elections are held will allegedly be Mr Tayyip Erdogan. The pollsters investigated…
Prev Next 1 of 15,506
More Stories

V. Kikilias: Tourism in Athens is back