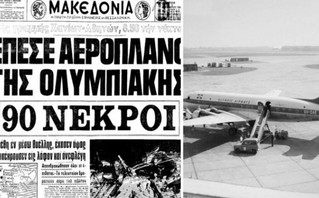 877 – Louis Travlos (son of Charles the Bald) is crowned king of Western Phragia.

1660 – For the first time, a female actress appears on an English stage. The actress (Margaret Hughes or Anne Marshall) plays Desdemona in William Shakespeare’s Othello.

1813 – Premiere of the 7th Agreement of Ludwig van Beethoven.

1854 – In his apostolic decree Ineffabilis Deus, Pope Pius XI proclaims the dogmatic definition of the Immaculate Conception, which claims that the Virgin Mary was arrested without original sin.

1912 – The leaders of the German Empire meet in an imperial war council to discuss the possibility of war.

1955 – The Council of Europe adopts the European flag.

1962 – Employees of four New York newspapers (which will later grow to nine) go on strike for 114 days.

1963 – Lightning strikes Pan Am Boeing 707, which crashes in Maryland, killing all 81 people on board.

1965 – The Church of Greece objects to the removal of the aphorisms between Pope Paul VI and Patriarch Athenagoras.

1969 – Olympic Air Force Flight 954 crashes into a mountain outside Keratea, killing 90 people in the worst Douglas DC-6 accident in history.

1972 – United Airlines Boeing 737 crashes after attempting to land in Chicago, killing 45 people. This is the first loss of a Boeing 737.

1974 – The Greek referendum of 1974 resulted in the abolition of the monarchy in Greece.

1980 – Former Beatle John Lennon is assassinated by Mark David Chapman in front of the Dakota Building in New York.

1987 – An Israeli tanker kills four Palestinian refugees and injures seven others in a car crash on the Israeli border with the Gaza Strip. The event triggers the First Intifada.

1991 – The leaders of Russia, Ukraine and Belarus agree on the dissolution of the USSR and the creation of the Commonwealth of Independent States (CIS) with Minsk as its capital.

1708 – Francis I, emperor of the Holy Roman Empire

899 – Arnulf of Carinthia, emperor of the Holy Roman Empire

1521 – Christina of Saxony, Queen of Sweden, Norway and Denmark