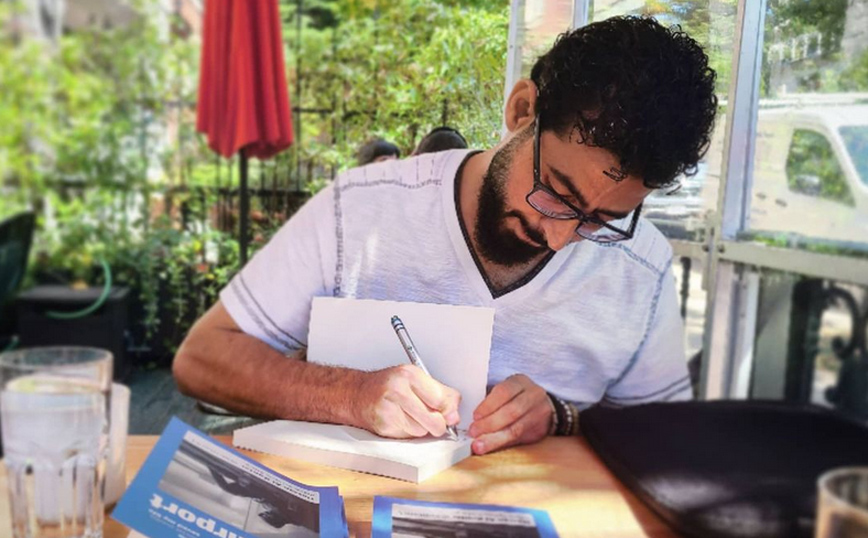 Iranian refugee Mehran Karimi Nasseri lived in a departure hall of the central airport of the French capital, for 18 years. His story was a source of inspiration for Steven Spielberg, who in 2004 directed the film “The Terminal”.

In the film, Tom Hanks plays Victor Navorski, who when he arrives at JFK Airport, is informed that his country is at war and the US does not recognize it as an official state. So his passport is not valid. Trapped in the airport transit area, he tries to survive. He does not know the language, he has no papers, no food and no place to stay. If he leaves the airport he is considered a violator of the law.

He worked as a marketing director for an insurance company in Abu Dhabi when the civil war broke out in Syria. Hassan Kodar had left Syria at the age of 25. When the war broke out he had to return. According to an interview with the Guardian and broadcast by the Athens News Agency, he refused to enlist and the Syrian embassy did not renew his passport, as a result of which he could not continue his work.

“For the next few years I was forced to live without papers in the United Arab Emirates. I sold my belongings and worked illegally – when I found a job. I slept in parks or on stairs. At the end of 2016, I was arrested by the police. “After two months in a detention center for immigrants, I was deported to Malaysia,” said Hassan.

Malaysia is one of the few countries to issue visas to Syrians but the 1951 United Nations Convention on refugees, so he had to leave within 90 days for Ecuador.

“On the day of the flight, they did not let me board without justifying it and reimbursing me for the cost of the ticket. I bought a ticket to Cambodia on one last attempt to leave the country. I arrived at Phnom Penh airport, but I was denied entry and sent back to Malaysia on the same plane. “As I was being deported, I was deported to the check-in room at Kuala Lumpur airport,” Hassan said. “Two Egyptians gave me a thin blanket and showed me where to sleep. The floor was cold and hard. The Egyptians left after a few days. I was left alone. Among other things, he had to take care of his daily needs, such as his hygiene, where he would wash his clothes, where he would charge his cell phone.

The fear that this would be his life was great. He started communicating and sharing his story on Twitter and Instagram. There was little response at first, until BBC News Asia made its story.

I now work for the Canadian Red Cross and help through Operation Not Forgotten, a refugee organization. “I hope with my story to help people change their minds about my country,” said Hassan, who recounts everything he experienced in his book “Man @ The_Airport”.

Hassan spent seven months at the airport and two more at a detention center.

Lady Gaga and Tony Bennett together for the last time