Luck level: You mistakenly bet on Saudi Arabia and won $1,300

The World Cup in Qatar has generated as much controversy as surprises, beginning with the presentation of Jungkook, a member of BTS, the Mexicans who made the Qataris dance to the rhythm of Rodeo clown and, most recently, a young Argentine who won by betting on the opposing team.

It is worth mentioning that everything happened due to a small mistake, because the young woman did not know how the betting system worked. The surprising news was shared by her boyfriend, becoming a man in a few minutes and becoming the envy of more than one soccer player.

Twitter user Eze shared the peculiar anecdote of how his girlfriend won about $1,300 for betting on the Saudi Arabian team instead of the Argentina team.

My girlfriend made a mistake and bet on a combination for Saudi Arabia, she did not understand how the page worked and she just withdrew 25 Lucas.

You just told me that you bet on Saudi Arabia at halftime, thinking that the number two meant that Argentina was going to score one more goal. I can’t believe it! 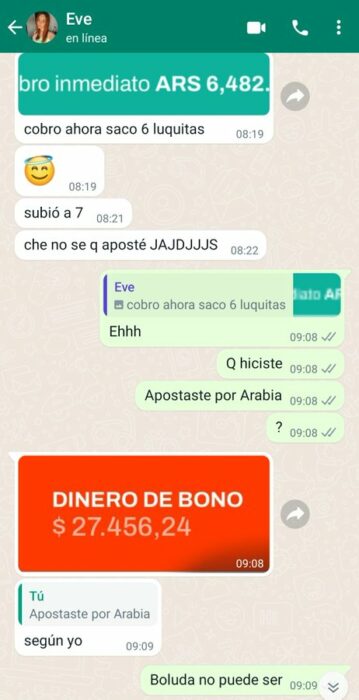 The publication has received more than 100 thousand reactions and comments with phrases such as:

‘If I were your girlfriend I would tell you: ‘The only one who knows about soccer here is me’; ‘I’m going to start placing the bets myself, my boyfriend never wins’; ‘Now that is being lucky’; ‘Mistakes I’d like to make over and over again’.

Although Eze has not mentioned what his girlfriend will spend the money on, it is clear to us that lucky breaks exist and can come at the least expected moment, brightening the day for more than one.

The network sells a fresh WhatsApp database: almost 500 million accounts, of which 10 million are from Russia

Brent Oil: A break below the September low at $84.06 would be a bearish sign – MUFG