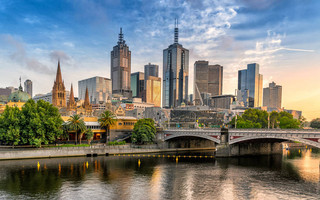 The Australian state of Victoria will enter a five-day lockdown after the increase of COVID-19 cases, following Sydney, as the two most populous centers of the country are facing an outbreak of the highly contagious Delta strain.

As of midnight today, the state’s 6.6 million residents will have to stay at home and will only be allowed to go shopping for essential supplies, for work and exercise, for health reasons and to be vaccinated. The lockdown in Melbourne, its second largest city Australia, is the fifth since the pandemic started a year and a half ago, reports APE.

Combined with the Sydney Home Order, the measure means that almost half of the country’s 25 million people are in lockdown. “You only have one chance to move fast and fast,” Victoria Prime Minister Daniel Andrews said in a televised press conference. “If you wait, if you hesitate, if you have doubts, then you will always look back and wish you had done more earlier. “I am not prepared to avoid a five-day lockdown now, just to be in a five-week or five-month lockdown.”

Melbourne has spent a third of 2020 on a curfew as the epicenter of the country’s initial outbreak, recording most of Australia’s 31,400 cases and 912 deaths so far. However, it had largely avoided new infections as the outbreak in Sydney’s seaside suburb – 900 km north – spread rapidly to the city and surrounding areas last month. That changed this week when a group of furniture carriers from Sydney traveled to Melbourne while they were infected and brought the virus to an apartment complex.

To date, dozens of places in Melbourne have been exposed to the virus, including a mall, public transport lanes and the famous Melbourne Cricket Ground during a race attended by thousands of people. After nearly two weeks without a new case, the state has recorded 18 new infections in the last two days, frightening authorities who stress how easily the Delta strain can spread even among people with instant contact. The neighboring state of South Australia has re-imposed the quarantine measure for those coming from Victoria, while New Zealand has also suspended quarantine-free arrivals from that state.

The lockdown in Victoria comes as New South Wales authorities announce a reduction in day-to-day cases, raising hopes that the June 26 lockdown in the Sydney metropolitan area will not be extended beyond its scheduled end date. this month. “While the number of cases is recovering everywhere, we are seeing stabilization. “They are not growing exponentially,” said New South Wales Prime Minister Gladys Beretziklian in Sydney.

Beretziklian described the numbers of new cases as “welcome reductions”, but warned that infections could rise due to infections circulating in the community. The number of cases will have to be significantly reduced to get the city out of the lockdown, as 28 of the 65 new cases recorded are active people in the community, she added.

Of the more than 900 people in New South Wales infected during the latest outbreak, 73 were taken to hospitals, with 19 people in intensive care units. Two deaths have been reported, the first for the country this year. Prime Minister Scott Morrison, under pressure over the slow pace of the vaccination campaign, said he would ask state leaders at a meeting tomorrow to ratify a new program to financially support companies affected by lockdowns.

“Lockdowns” should be the last resort, but sometimes with the variant Delta you get to this point much faster than before, “Morrison said. More than 12% of the adult population of about 20.5 million has been fully vaccinated, with officials pointing to changes in health authorities’ recommendations and supply restrictions.

Derek Black Aug 1, 2021 0
President Joe Biden, Chief Medical Advisor, Anthony Fauci, said today that it does not expect the US to return to…

Aug 1, 2021
Eight of the dead are from forest fires off the south coast of Turkey, while firefighters are battling for a fifth…

Aug 1, 2021
The companies Pfizer and Modern have reportedly increased their coronavirus vaccine prices in their latest…

ELAS Headquarters for Evros: There was no involvement of Greek forces…

Aug 1, 2021
"Regarding publications of Turkish media that are reproduced on websites, it is announced that there was no…