New risks: how the story with Bitzlato will end

For a week now, the scandalous news related to the activities of the Bitzlato crypto exchange has not subsided. How might the situation affect the industry?

What is the point

On January 18, 2023, representatives of the Bitzlato cryptocurrency exchange reported a hack and suspension of their activities. At the same time, the service employees assured that the attackers were able to withdraw only a small part of the funds, asking users to temporarily not replenish their balances. Later it became known that the US Department of Justice arrested the co-founder of the exchanger Anatoly Legkodymov. The agency also suggested that the site is associated with obtaining assets from the darknet market. During the investigation, other services also became involved, in particular, Europol arrested the assets of Bitzlato executives for 70 million euros. But what are the risks of this whole situation for the industry?

How will the case with Bitzlato affect the value of assets in the cryptocurrency market in the future? In short, almost nothing, or extremely insignificant. There is a banal explanation for this – Bitzlato is too small a player in the global industry. Of course, for an ordinary ordinary user, the company is essential. But across the industry, there are far bigger players.

Judge for yourself. The average daily volume of bitcoin on the Bitzlato balance is slightly more than 0.01% of the volume of Coinbase, the largest crypto exchange in America, and the total volume of BTC transfers is 0.55%. In addition, over four years, the volume of transfers between Bitzlato and the largest US exchange totals slightly less than $26 million. At the same time, the transfer volume of the largest player is $2.7 billion per day. These data for April 2022 are provided by the US Financial Crime Enforcement Agency (FinCEN). The numbers clearly show that Bitzlato is not the largest shark in the cryptocurrency ocean.

It is worth noting how the quotes of cryptocurrencies reacted at the time of the announcement of problems with Bitzlato. These events began on January 18. On that day, Bitcoin fell 2.2%, Ether 3.41% and Solana 9.1%. After that, the losses were won back. It is clearly comparable to how the market reacted to the bankruptcy of FTX. Bitcoin collapsed already when withdrawals from the exchange were suspended. If on November 6 and 7 the fall was not so significant and amounted to a little more than 1.5%, then on November 8 BTC lost almost 10%, and on November 9 – almost 15%. Other cryptocurrencies were even more in a fever, Solana fell on November 9 by more than 42%.

The main claims against Anatoly Legkodymov, the majority shareholder of Bitzlato, are non-compliance with the law on money laundering (AML). Investigators point out that the crypto exchange did not collect enough supporting data from its customers (did not follow KYC standards). Why would all this?

Moreover, the situation may be a good excuse for lawmakers to once again “tighten the screws” and tighten regulation. For example, you can once again require crypto platforms to disclose even more information, as well as introduce a number of prohibitions and toughen liability for violating the law.

According to official sourcesthe maximum sentence in the United States that Legkodymov can receive is 5 years in prison.

However, it may well be a scenario in which the terms for such violations will be increased, and their greater detail will be introduced. In other words, liability will be prescribed depending on the volume of transfers, the number of violations, or so on.

It may also cause a round of new introduction of similar legislative creativity and the establishment of new administrative barriers in Europe. After all, the US Department of Justice and FinCEN are investigating in close connection with the French authorities.

In addition, on January 24, it became known that Europol took four more defendants in the case related to Bitzlato. Therefore, the prospect of tightening legislation in Europe is no less likely than in the United States. It is already known that American and foreign banks will be prohibited from interacting with the exchanger.

Consequences for the Dark Web

Since Bitzlato did not properly provide the KYC procedure, its clients included various representatives of the dark web. It is officially known that marketplaces Hydra, BlackSprut, OMG! and Mega. 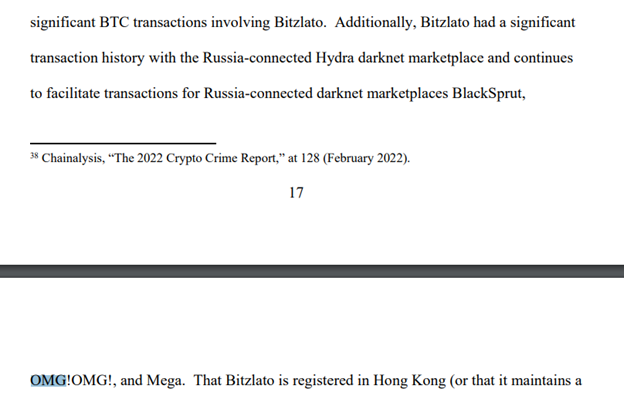 Now, most likely, this channel will be blocked and many organizations will no longer be able to use Bitzlato for their own purposes. However, this is unlikely to stop anyone from continuing their activities.

For comparison, in Russia, for example, they are fighting with financial pyramids. Every day CBR publishes a list new companies that show signs of illegal activity. Of course, this does not stop many attackers. So it will be with Bitzlato. In the end, darknet users have always been able to find alternative routes.

Not so long ago, it was proved that from 2018 to 2022, Binance processed transactions worth $ 346 million through Bitzlato, and indeed was one of its largest counterparties. What awaits the stock exchange now?

Most likely, nothing but reputational costs. $346 million for an exchange with more than $20 billion in daily trading volume is a mere penny. Yes, and Binance agreed to cooperate with the investigation in the Bitzlato case.

Before the arrest of Anatoly Legkodymov and some of his associates was announced, there was news about the Bitzlato hack. Interestingly, later in the Telegram channel, representatives of the crypto exchange themselves denied this information, referring to the actions of law enforcement agencies that did not allow access to French servers. Therefore, it is difficult to say unequivocally whether the hacking took place.

In any case, part of the clients’ funds turned out to be inaccessible. Nevertheless, Bitzlato himself assures that all assets are safe and will reach their owners. Approximate terms, which leads the service to his Telegram channel are two weeks. One has already come to an end, the second will end on February 2. So there is not long to wait: either everything will end happily, or we will hear a new series of scandals. 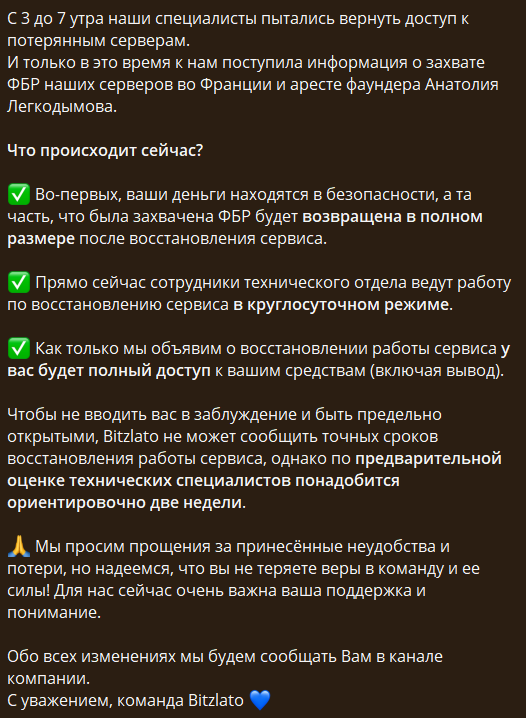 Thus, the case with Bitzlato had a certain impact on the clients of the crypto exchange. Both ordinary citizens and major players were involved to one degree or another. In general, the market reacted relatively calmly to the hype around Bitzlato, and the authorities received a new reason to tighten laws in the field of cryptocurrencies and their circulation.

This material and the information in it does not constitute individual or other investment advice. The opinion of the editors may not coincide with the opinions of the author, analytical portals and experts.

I am an experienced journalist, writer, and editor with a passion for finance and business news. I have been working in the journalism field for over 6 years, covering a variety of topics from finance to technology. As an author at World Stock Market, I specialize in finance business-related topics.