“No more reggaeton”: Woman calls to stop listening to the genre

With the arrival of each generation, there are changes that try to adjust to the new ideologies. This is notorious in music, which has always been a forceful form of expression. Currently, one of the genres that is at the top is reggaeton, which was born as a phenomenon underground from the slums of Puerto Rico and is a variant of reggae and rap.

His popularity has grown uncontrollably, but just as he gains more followers every day, he also enjoys a large number of haters. one of them is Anna Maria Velezwho recently made a call to stop listening to the genre because “it is the flag of machismo and misogyny.” 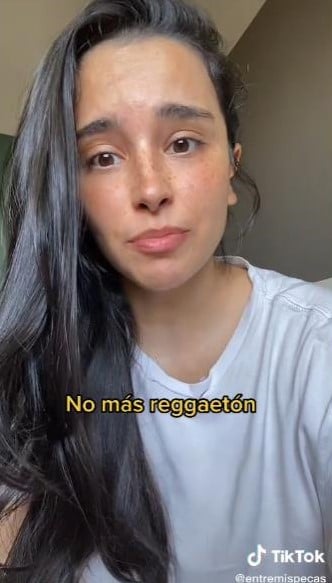 From her TikTok account, the young Colombian decided to expose her compelling reasons for not being an “accomplice” of the sexist structure, from which she believes reggaeton is born. She before this she declared the following:

They are selling you the image of an idealized woman […] In their videos and in their lyrics they are trying to tell us that we are impressionable, manipulable, domesticable.

If you listen carefully to the lyrics of those songs, it’s like a morbid man saying dirty things and barbarities. And for someone to talk to me like that and for me to accept it, man, I don’t even respect myself!

From this argument he hangs on to expose his analysis, which many users support. However, we must also highlight those who disagree, because it is not the first time that a debate of this nature has been opened and the same points are always attacked: misogyny, sexism and the value of women.

‘There are many genres with the same description as you do, it’s not only reggaeton’, ‘I listen to reggaeton not because of the lyrics, but because of the rhythm and it doesn’t affect my way of seeing society or my values ​​that they taught me as a child’ .

The truth is that this genre uses a lot of explicit lyrics that involve the female sex, but, honestly, a host of other problems could be attacked that also affect women more directly instead of believing that by eliminating one type of music, an entire oppressive system will suddenly fall. It only remains to say that we can put our grain of sand in many ways and respecting the tastes of others is a good way to start.

Barroso says basic education is a “false priority” in Brazil