Increase of Group revenues by 1.8% thanks to the further growth in Greece, the OTE group announced for the third quarter, with the Adjusted EBITDA (AL) of the Group increasing by 3.2% to 352.5 million euros.

In particular, as the group states in a relevant announcement, the consolidated revenues of the OTE Group showed an increase of 1.8% in the third quarter of 2021 and amounted to € 861.4 million.

In Greece, revenues increased by 3.5% to € 789.9 million, supported by the recovery in tourism and the stable demand for higher speeds in fixed and mobile data. In Romania, mobile revenues amounted to € 80.8 million in the quarter, down 10.8%, reflecting some extraordinary favorable adjustments made in the third quarter of 2020. Excluding these adjustments, revenues in Romania would have reduced by about 4%.

The total operating costs of the Group, excluding depreciation, impairment and charges related to reorganization costs (mainly Voluntary Retirement Programs), and non-recurring legal cases, amounted to € 488.1 million in the third quarter of 2021, increased by 0.9 % compared to the third quarter of 2020, as significant savings in staff costs following the strategic transformation initiatives implemented in 2020, almost offset the increase in energy costs.

The Group recorded profit before tax amounting to € 281.5 million, higher by € 271 million compared to the third quarter of 2020, mainly due to the impairment of € 160 million in mobile Romania in the third quarter of 2020, as well as the reversal of the forecast € 132 million in the current quarter related to the OTE pension fund for voluntary retirement programs of previous years. 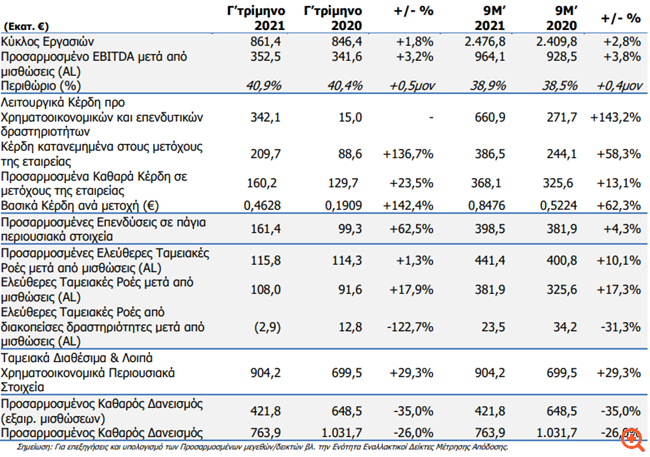 Tsamaz: The group had a strong third quarter

“Thanks to our continued strong performance in Greece, the OTE Group recorded a strong third quarter. Group revenues, EBITDA and EBITDA margin, are all higher than last year”, said the president and CEO of the group, Michalis Tsamaz and added: In Greece, revenues were boosted by growing demand for higher speeds and more data, both mobile and fixed, as well as the recovery in tourism that led to a significant improvement in roaming revenue. and we got 100% on the mobile, whose performance is in the right direction.

“Our strong cash flows since the beginning of the year allow us to implement smoothly, both the shareholder remuneration policy and our investments in state-of-the-art infrastructure, for the benefit of our customers and the country.”

Thanks to its state-of-the-art networks, OTE provides even faster speeds, quality and reliability to its customers, both retail and wholesale. The dynamic development of FTTH and 5G networks enables it to offer even better services to customers and to continue to grow. Following the lifting of travel restrictions due to COVID 19 and the easing of travel restrictions, OTE estimates that it will achieve a substantial recovery of revenue and profitability in 2021.

The gradual implementation of the Recovery and Sustainability Plan in Greece, amounting to € 30.5 billion, is estimated to contribute to the country’s economic development in the coming years. OTE has the know-how to enhance the digitalization of the country and to offer the technological background that will accelerate its future development. As the demand for wider access to high speed connections increases, OTE intends to continue its investments in fiber optic home networks (FTTH) in the coming years. These investments will contribute to the sustainable development of OTE, in the medium and long term.

For 2021, the adjusted investments are estimated to slightly exceed € 550 million, while the Management continues to expect adjusted free cash flows of approximately € 575 million. Free cash flows will amount to approximately € 480 million, making up the total Remuneration to Shareholders for 2021. In addition, the Board of Directors approved an extraordinary remuneration to shareholders of € 174 million, which is a distribution of the net amount from sale of the stake held by OTE to Telekom Romania (Fixed).

On October 14, 2021, the Board of Directors of the Company approved the distribution of an extraordinary remuneration to the shareholders amounting to € 174 million, in the form of an extraordinary dividend and repurchase of own shares, after the sale of 54% of OTE to Telekom Romania Communications SA Specifically, the Board of Directors approved the distribution of an extraordinary dividend of € 113.3 million or € 0.248 per share (or € 0.252068 adjusted to the same shares that the Company will hold on the dividend cut-off date) which will be paid on November 19 2021. In addition, the Board of Directors approved the allocation of approximately € 60.7 million during the period from October 29, 2021 to February 20, 2022 for the purchase of treasury shares, under the existing Program for Acquisition of Own Shares as approved by the Extraordinary General Meeting of Shareholders on February 20, 2020.

On September 30, 2021, the Telecommunications Organization of Greece SA (“OTE”), completed the sale to Orange Romania of the percentage (54%) held by Telekom Romania Communications SA (“TKR”), with the final price amounting to € 295.6 million. After the sale, the Administrative The Company’s Board approved an extraordinary remuneration of € 174 million to its shareholders, in the form of an extraordinary dividend and repurchase of own shares.On September 9, 2021, the acquisition by OTE of 30% of Telekom Romania Mobile Communications SA (TKRM) was completed with a final price at € 58.9 million following the conditions set by the European Commission (EU).

During the second year of the Own Shares Acquisition Program 2020-2022 and specifically in the period March 5, 2021 to September 30, 2021, a total of 7,096,041 treasury shares were acquired with an average purchase price of Euro 14.73 per share. On June 9, 2021, the Ordinary General Meeting of the Company’s Shareholders approved the cancellation of 3,469,500 own shares. Following the completion of the legal and regulatory procedures, the above shares were canceled and delisted from the Athens Stock Exchange (ATHEX) on July 19, 2021. On September 30, 2021, OTE owned 5,048,517 treasury shares.

See the full announcement in the right column Related Files

AstraZeneca: The vaccine brought profits in the third quarter

The Big Debate: Know if it’s time to invest in cryptocurrencies

Ford postpones the return of 30,000 workers to the office…