Prohibiting cannot be regulated: the prospects of the cryptocurrency industry in Russia

Participants of the Blockchain Life 2021 conference discussed the regulation of cryptocurrencies in Russia, the possibilities of uniting the industry to influence regulators and development prospects.

On October 26 and 27, Moscow hosted the Blockchain Life 2021 forum. As part of one of the sections of the second day of the forum “Regulation of cryptocurrencies in Russia. Law on CFA. Digital Ruble ”speakers and industry participants discussed legislative initiatives in relation to the industry.

Maria Agranovskaya, a member of the Expert Council on the Digital Economy and Blockchain Technologies in the State Duma of the Russian Federation, opened the section with a speech on the current situation with the regulation of NFT, DeFi and the latest trends in the current legislation on CFA.

As Maria Agranovskaya notes, the legislation is limited to several acts, and now it is not always clear how to solve some issues, for example, when interacting with cryptocurrency users with foreign platforms.

Among the positive developments in the industry, Maria mentioned the legal release of the NFT recently organized by the Hermitage. With regard to taxation of crypto assets, amendments to the Tax Code are still pending with regulators.

“We managed to ensure that there were no punishments and prohibitions in the draft laws until legal clarity appeared as to what income and expenditure were and how to confirm it,” says Maria Agranovskaya. “An interesting direction is NFT. This is not a legal concept, a marketing designation, how to interpret it from the point of view of a specific law and country is still a question that is being discussed with regulators. ”

According to Maria, one of the options for NFT regulation is the Federal Law “On attracting investments using investment platforms and on amending certain legislative acts of the Russian Federation” dated 02.08.2019 N 259. At the same time, each project requires separate attention, for example, if we talk about NFTs related to works of art – not everything can be recognized by DRM.

In cooperation with law enforcement agencies, industry participants are working on the creation of a Code of Conduct for participants in the cryptocurrency market and CFA. 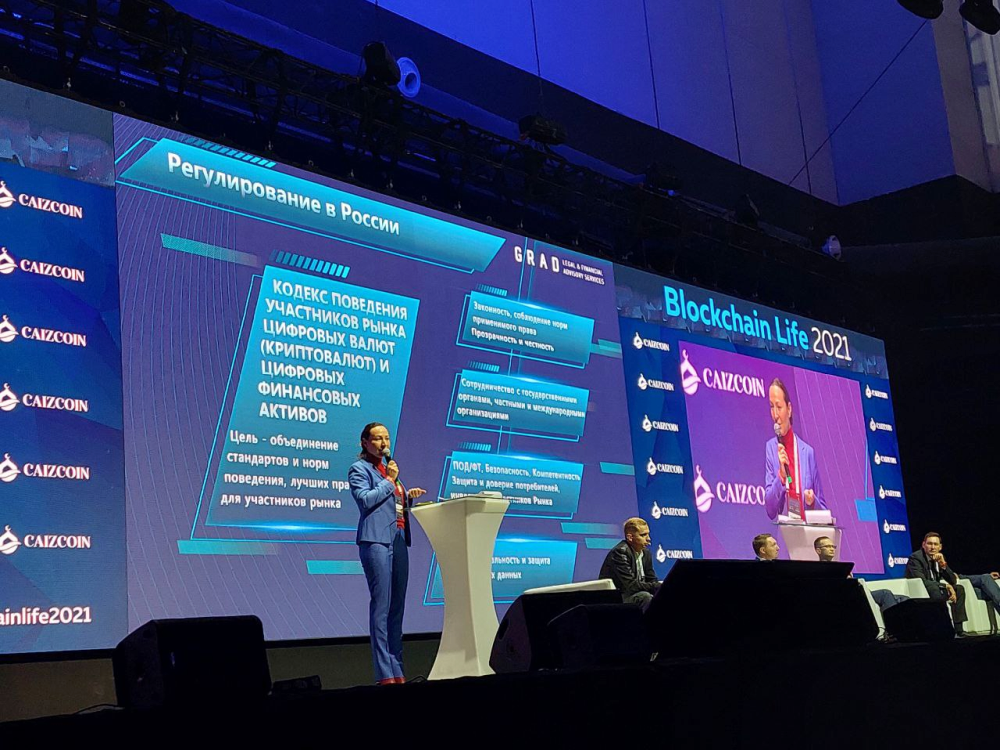 “The good thing to be regulated is stability, working in a legal environment and being able to get support from regulators,” Maria said.

Alexey Minaev, Deputy Director of the Digital Economy Development Department of the Ministry of Economic Development of the Russian Federation, spoke at the section. He described the situation with the regulation of cryptocurrencies in the world. 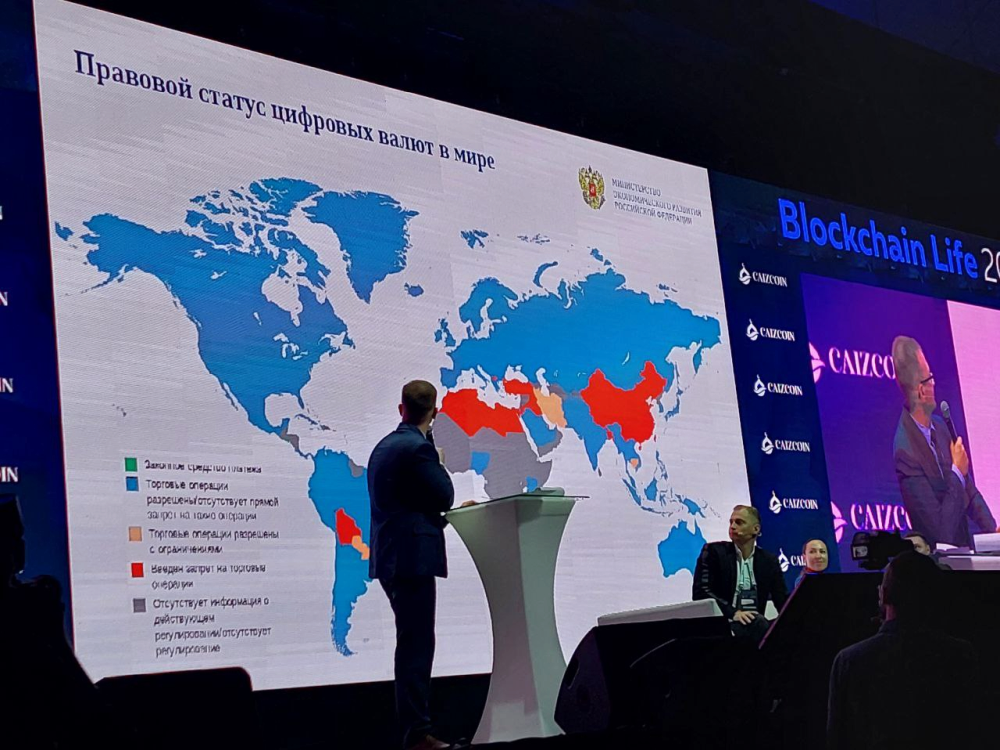 “El Salvador took a bold step and accepted Bitcoin. However, from the point of view of regulating monetary circulation, the situation in the world is quite stable. The issues of cryptocurrency regulation have not been fully resolved, but there are almost no strict prohibitions. Regulators continue to search for optimal models and approaches, ”said Alexey Minaev.

The Director of the Department for Development of the Digital Economy of the Ministry of Economic Development of the Russian Federation noted that according to various estimates, 5-10% of Russians are involved in the circulation of cryptocurrencies.

“I look at this hall and understand that we are facing a full-fledged branch of the economy, which is worthy of adequate regulation,” said Minaev.

He said that among the legislative initiatives, the main project in development is an amendment to taxation to account for income from crypto assets. In addition, a law on “digital sandboxes” was passed, which allows the launch of fintech projects. Minaev noted the need to unite industry participants to interact with regulators. 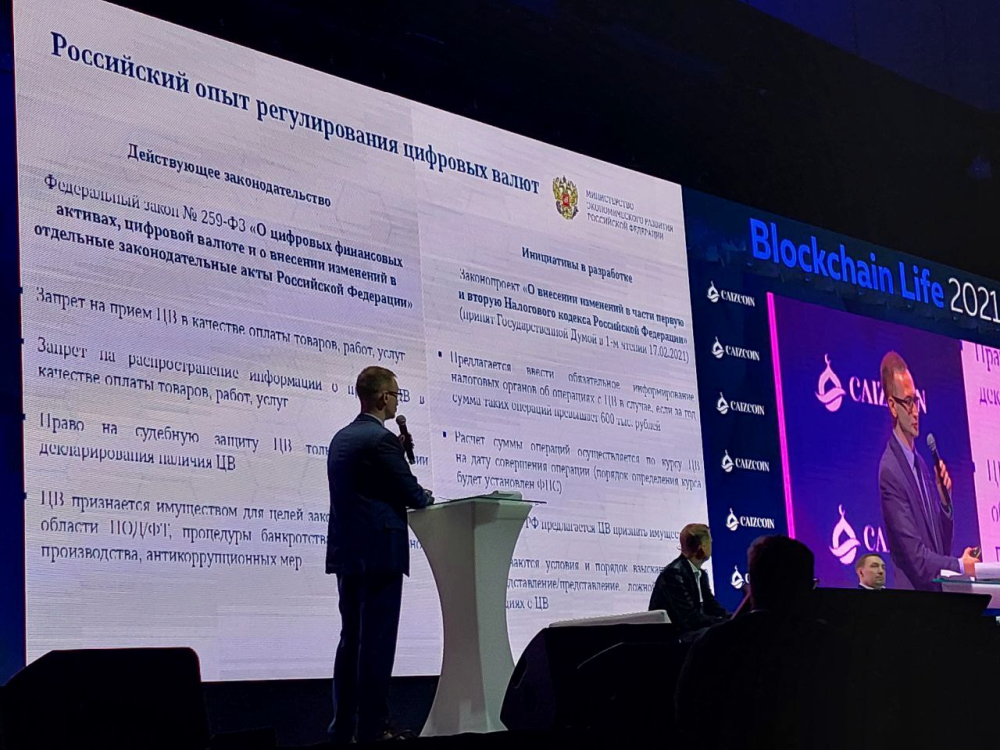 “My opinion is that the industry should unite. Nominate representatives who will shape the image of future regulation. Otherwise, there will be regulation, which will go down “from the top”. It is necessary to move from hype and bright slogans, to mobilize and come up with serious proposals. ”

According to Dmitry Marinichev, the Internet Ombudsman (Representative of the Presidential Commissioner for the Protection of the Rights of Entrepreneurs in the Internet), the association of industry participants is unlikely to affect the decision of the legislators, and the current legislative acts do not meet the needs of the industry.

“I want regulation, order and legality that will satisfy us. So that the law is fair and even. The law on CFA is only for business, large companies, it has not influenced ordinary people who are trying to change the technological order, ”Marinichev said.

According to him, the reason for the ban on mining in China is problems with the energy balance in the country, the growing urgency of the ESG agenda, as well as the imminent launch of the digital yuan. Marinichev said that regulation of cryptocurrencies in Russia is likely to always be prohibitive.

“In Russia, they will never be allowed to make money on cryptocurrency transactions and accept payments in anything other than the ruble. But there is a positive – the same ESG agenda, excess energy in Russia, can lead to the fact that cryptocurrencies and their regulation will have a liberal focus. We can get regulation that will be very loyal to large companies, especially with state participation. ”

Sergey Khitrov, founder of Listing.Help and Blockchain Life. A member of the Expert Council on the Digital Economy and Blockchain Technologies in the State Duma of the Russian Federation, within the framework of the section he expressed his opinion on the prospects for regulating the industry.

“There is the Bank of Russia, which generally adheres to a prohibitive policy in relation to means of payment. Nobody can influence this policy except the president. There are two options – to convince the Central Bank that they are wrong or to prepare an alternative document for the president, “Khitrov said. 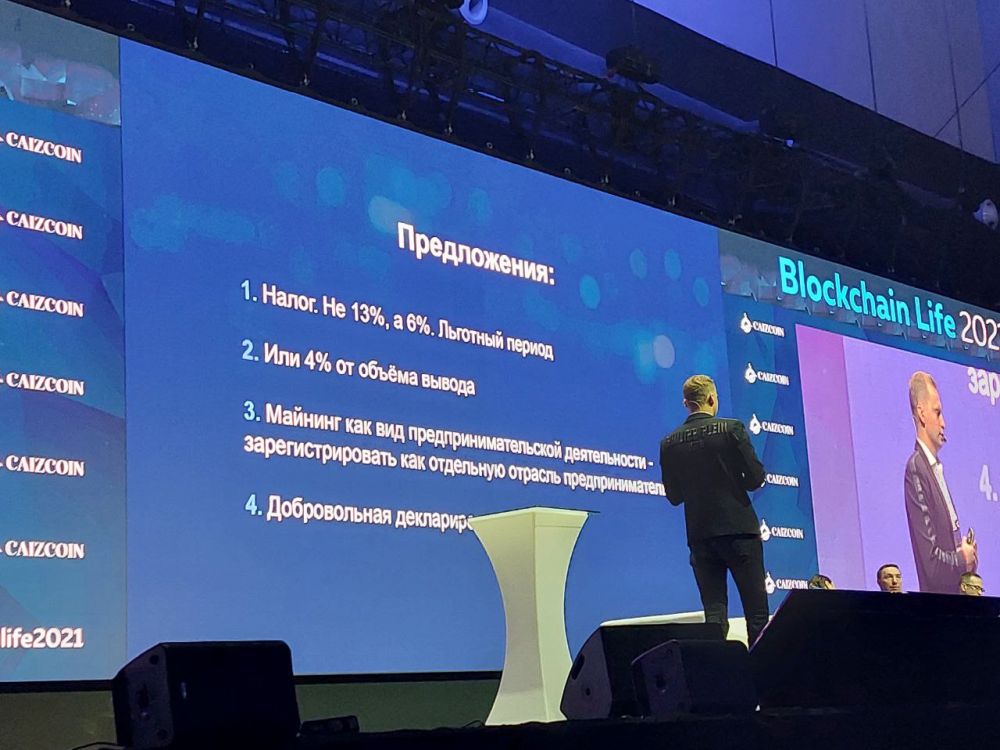 According to him, the main wishes of market participants can be divided into four key areas:

Ministries estimate the volume of the cryptocurrency market in Russia in different ways, according to various estimates, 20-40 trillion rubles ($ 284 billion). Khitrov noted that cryptocurrencies are one of the most promising areas in terms of finance and money. 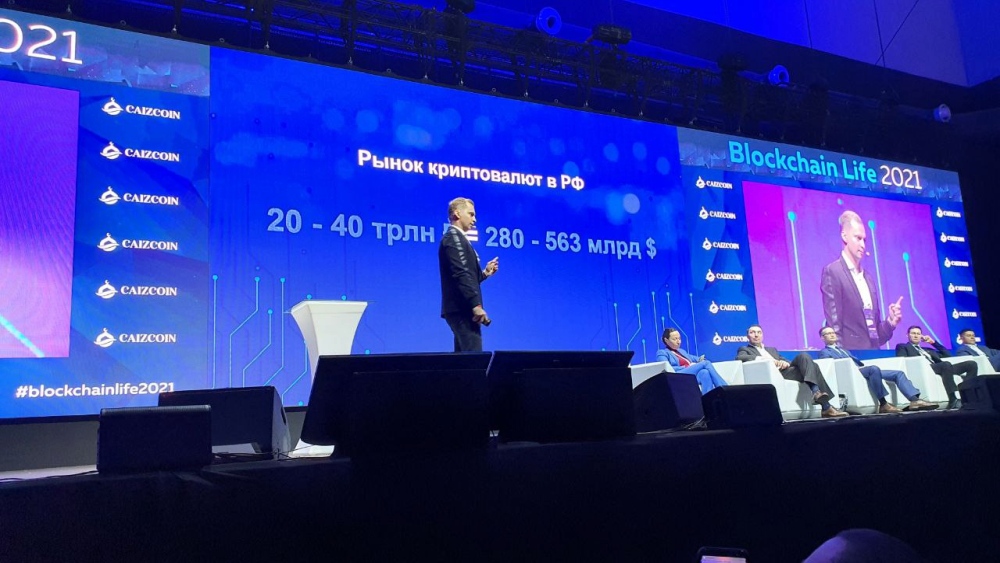 The authorities’ greatest fears are related to the fact that cryptocurrency is “black” money, although much more illegal income passes through cash. The solution is to control the main directions of the cryptocurrency industry to track black money. 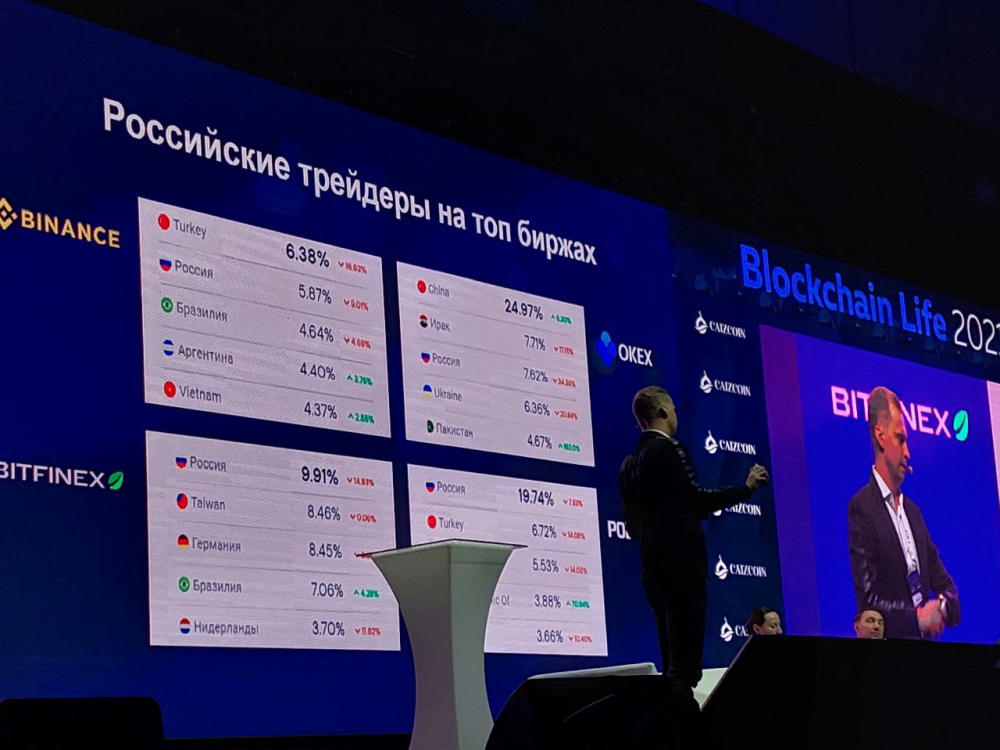 The second problem is that money will be withdrawn from the country. However, according to Khitrov, it is not the cryptocurrency that is to blame for this, but the business climate in the country. The solution is to create a business climate that will allow entrepreneurs to work and earn money in Russia.

“The worst situation for Russia was the 2020 bill, when they wanted to criminalize the transfer of cryptocurrencies. Then there was news that the Ministry of Internal Affairs was looking for opportunities to seize cryptocurrency from the owners. This scared the market participants. Many people started looking for options to leave Russia. Many now have dual citizenship or residence permits in other countries. You can’t even imagine how many top projects belong to Russian guys. The largest taxpayers insured themselves – the authorities scared them. We are trying to convey this to the legislators and improve the situation, ”Khitrov said.

Burger King: on the menu only foods without preservatives, artificial colors and flavors. How long is the road to sustainability?

Jane Harper Dec 8, 2021 0
The global perception is that the world is more dangerous than it was last year. In Brazil, 83% of people have…

Switzerland: More than 11,000 candles in front of parliament in memory…

Mozambique: More than 600 women and girls have been abducted by…

Dec 8, 2021
The Islamists who have been operating in the north for three years Mozambique have abducted and enslaved more than…

Dec 8, 2021
The Peruvian Congress rejected, on Tuesday (7), the impeachment request against President Pedro Castillo, of the…

Dec 7, 2021
On the shelves of the supermarket Rainbow Grocery Co-operative in the San Francisco of USA is a unique delicacy,…
Prev Next 1 of 6,613
More Stories

Grayscale: a quarter of US investors own cryptocurrencies