The barrage of positive reports and recommendations of international companies, investment banks and stock exchange companies for the story of Greece and the big bet of the Athens Stock Exchange continues at an intense pace. The Greek economy recorded one of the highest rates in the Eurozone in 2021, with growth estimates of 8% or more being the majority, while the ground is laid for another strong year for GDP, driven by investment and capital Recovery Fund that will strengthen the upward trajectory of upgrades by rating agencies. In this scenario, the Athens Stock Exchange seems to give this year the strong profits it “owed” from last year, with the dynamic momentum of January being, according to analysts’ estimates, only the beginning of what will follow in the rest of it. year. Admittedly, 2022, and possibly 2023, will be the period of the great re-rating of the Greek stock market, with the banking shares having the reins and leading the General Index to a steady upward trend.

Of course, the international environment is a critical factor for the ATHEX. as much as it now shows that it has the stamina and the will to become autonomous, if we are led to a strong sell-off and in fact with duration in the international stock indices, the Greek market will not remain intact. However, the forecasts of many international companies show that international markets will continue to grow this year, albeit at a slower pace than in the last two years, but the “bears”, as well as the risks, are not missing. 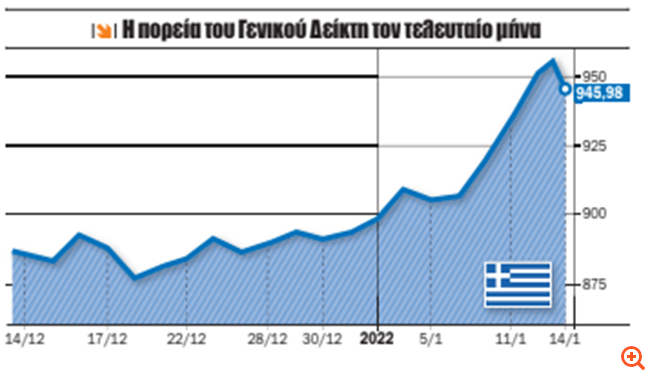 These include the elections in France, the political scene in Italy, the geopolitical tensions, the evolution of the pandemic with possible new, more durable variants of COVID-19 and, of course, inflation. Markets are more concerned about the risk of inflation becoming more persistent. Strong demand, “tight” labor markets, tight profit margins and tight supply chains indicate that the risks to inflation are rising. Thus, while nominal inflation rates are likely to decline in 2022 as commodity inflation declines, it is likely that underlying inflation will become a major concern for central banks as we move through the year. Also, 2022 is a year in which interest rates and bond yields will increase, unlike what we saw in the two years 2020-2022, with the effects on stocks remaining unknown and depending on how sharp the sell-off of bonds.

A series of upgrades for Greece is coming

International analysts say that in the near future Greece will see a barrage of upgrades from the rating agencies, something that will help it climb very quickly to the “investment” level, armed with the continuation of reforms, the resources of the Recovery Fund and the stable policy. backdrop. The government’s goal remains to achieve this milestone in the first half of 2023, however, the earlier the country wins this “bet”, the more it will benefit, not only from its inclusion in the regular QE program that “runs” the European Central Bank, but also from the expansion of the investment base of Greek bonds.

During its first evaluation for the year, Fitch proceeded to upgrade Greece’s prospects to positive, which marks the upgrade and rating over a period of 12 months. According to Société Générale, Greece will be one of the big winners of the house ratings in 2022 as it will see a series of upgrades from all the houses.

Specifically, it estimates that S&P will upgrade Greece to its first rating for the year on April 22, Fitch will then also upgrade the country in July or October, while Moody’s will also upgrade on September 16. Thus, by the end of 2022, the rating of Greece will be only one point away from the investment level, closing the gap of ratings against other European countries, and this is because the economic growth of Greece in 2021 has significantly exceeded the forecasts of rating agencies . 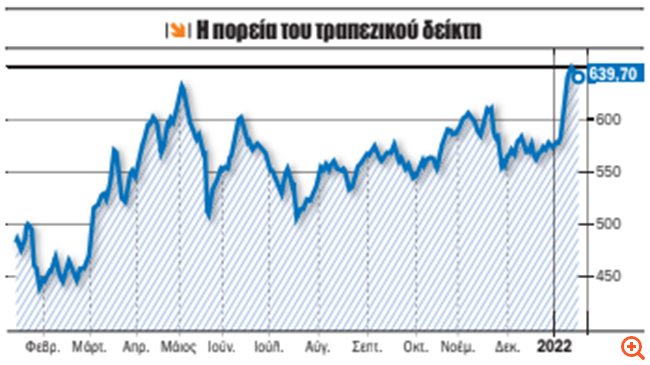 The French bank emphasizes that the debt sustainability of Greece is maintained, with the cost of servicing it being lower than for other regional European ones. Together with the help of NGEU funds, the government will have ample resources to rebuild the economy without much deterioration in its public finances.

For its part, JP Morgan expects that the positive movements in the ratings of Greece will continue in 2022, with the country regaining the investment grade at the end of 2022 or the beginning of 2023. As it estimates, the upgrades and not The downgrades will dominate the Eurozone this year, reflecting the optimistic outlook for the macroeconomic and policy front, as well as its view of relatively controlled spreads in the region’s bonds, despite declining ECB support. According to the American bank, the chances for Greece to be upgraded by Moody’s this year are set at 90%, while at 75% it places the chances of a similar move by S&P, Fitch and DBRS.

January is just the beginning

2022-2023 is the year of the re-rating of Greek shares, with real money (quality, long-term) investors strengthening their flows to the Greek stock market by valuing and “betting” on Greece’s inclusion in the investment grade, notes in an analysis of the consulting company DCS Delphic Strategies.

Specifically, it mentions six many important factors that are expected to strengthen the image and prospects of Greek stocks:

1) The shift of investors internationally to “value” shares, a bet that concerns Greece a lot.

2) The fact that European banks are on the radar of investors, with the Greek ones thus attracting portfolios at a time when the industry is expected this year to completely eliminate the problem of problem assets with NPEs falling below 5% this year.

3) The fact that liquidity conditions in the Greek economy have improved significantly.

5) That Greece is in the best position in its history in terms of structural reforms, and

6) the fact that corporate fundamentals are strongly supported by improving the macroeconomic environment.

Particularly optimistic about the prospects of ATHEX. Wood also appears. According to a new report, the strong fundamentals of 2021 – such as the impressive economic recovery, the activation of the Recovery Fund, the stable political environment and the successful transformation of the banking sector – did not translate into a performance for the General Index in 2021, with a moderate increase of 10%, underperforming in relation to the European indices. Regarding the best performance of 2021, Wood states that Eurobank (+ 54%) stood out, followed by Ethniki (+ 30%), Mytilineos (+ 27%), PPC (+ 27%), GEK Terna (+ 21%) and OPAP (+ 20%). On the other hand, Piraeus Bank fell 94% (due to AMK), Jumbo fell by 11% and the return on many shares of FTSE 25 was weak (PPA -12%, HELEX -5%, Sarantis – 5% , Fourlis -4%, Lamda Development -3% and Titan -3%).

The possible reasons behind the ATHEX underperformance in 2021, according to Wood, include: the appearance of the Delta and Omicron variants, with Greece being considered a high beta play due to its dependence on tourism, as well as the drying up of liquidity caused by capital increases.

The positive is, as he points out, that the market recovered at the beginning of 2022, with the General Index rising by 6% on an annual basis and the strong performance of the banking sector (+ 12%). “We believe that there are good reasons to continue this re-rating, due to the supportive macroeconomic environment, the stable political scenario, the ‘clean’ banks and the cheap valuations”, as he points out, emphasizing that it is bullish for Greek banks, with Its top pick should remain the National Bank.Of the non-banking securities, its top picks are OPAP, GEK Terna and Motor Oil. , Titan, PPA, Aegean and HELEX.

The impressive story of the banks

The banks were without a doubt the driver of the Athens Stock Exchange in achieving this year the important milestone of the return of the General Index over 950 points for the first time after seven whole years. Since December, there has been a wave of reports from domestic and international companies on Greek banks, which said the obvious. That their valuations are very low and do not justify the huge improvement they have made on the NPEs reduction front but also the strong prospects created by the Recovery Fund disbursements. However, despite the rally they have already recorded, with the banking index having jumped by almost 180% from the historical lows of 236 points recorded at the end of October 2020, analysts insist that the margins for growth are significant in the near future.

This wave of positive reports continued last week, with Deutsche Bank deciding to restart coverage of the entire banking sector (so far it only monitored Eurobank), noting that Greek banks are in a state of transformation as the focus begins to shift. towards profitability, at a time when fears about the capital of Greek banks have largely ended.

According to the German bank, the declining risk costs, with clear convergence between all banks by 2023-24, combined with the positive impact on lending, which comes from the economic growth of Greece, are the main factors supporting the profitability recovery. Deutsche Bank sees that the average return on RoTE equity will be around 7% in 2023, for most systemic, despite somewhat sluggish revenues.

Following the reports of domestic stock exchanges such as Eurobank Equities and Pantelakis Securities, which underlined their optimism for the course of the industry in 2022 earlier this month, Euroxx also gave its positive message to Greek banks last week. As he noted, Greek banks, having reduced the risks from the old NPEs and backed by their abundant liquidity position and the NGEU, are ready to lead the economic recovery through credit expansion and the development of the financial system, which will allow them to thrive in the long run.

In terms of the stock market, the attractive investment story of the industry, which is based on the sharp drop in risk costs (CoR) and the repayment of loan growth, remains intact despite the negative effects of the extension of COVID-19 containment measures. Thus, it confirmed the overweight rating for all banks, while in terms of target prices, for Alpha Bank it gives 1.60 euros from 1.25 before with a growth margin of 28%, for Eurobank it gives 1.30 euros from 0.88 before and a rise margin of 29%, for the National Bank 4.20 euros from 3.40 euros and a rise margin of 30%, while for Piraeus it maintains 2.20 euros and sees a rise margin of 54%.

The draft law on GEMI is in public consultation

“Spider-Man: No Homecoming” becomes the 6th highest-grossing film in history

USD/JPY Price Analysis: Posts Minimal Losses but Holds on to 127.75

How to Trade with Cryptocurrencies in 2022?

Gold: With gains of 1.7% per week, it broke the worst series…