When Apple unveiled the iPhone 7 without the traditional 3.5mm audio output, it wasn’t sad for long. Before that, I did not use wireless headphones, but I realized that this was a sign. I immediately bought the Beats Powerbeats3 Wireless, which were relevant at that time, and then AirPods – now I have AirPods Pro for every day. A couple of days ago I decided to conduct an experiment and give up wireless headphones for at least one day. Instead, I took wired EarPods with a Lighthing cable to use with iPhone and iPad without an adapter. There were seven scenarios in one day when I needed headphones. Instead TWS used the classics, and this is what came of it.

Listening to videos on my tablet while doing household chores

Yes, there is no mistake in the subtitle. Rollers on the tablet, to a greater extent I listen, and not watch. I usually get up early enough, but I don’t wake up right away. My useful brain activity begins no earlier than half an hour after waking up. In order not to waste this time in vain, my dirty dishes left in the kitchen in the evening, I prepare breakfast and do other semi-mechanical tasks. More often than not, at this time, somewhere nearby there is an iPad, on which something new from my YouTube subscriptions is playing, and headphones are in my ears. With wireless, it is very convenient to move around the kitchen and almost the entire apartment as a whole – the AirPods Pro signal does not disappear even through a couple of walls. Wired headphones are very restrictive of movement and are not particularly suitable for this scenario. You have to limit yourself to the iPad speaker.

Thinking how to connect headphones to my TV 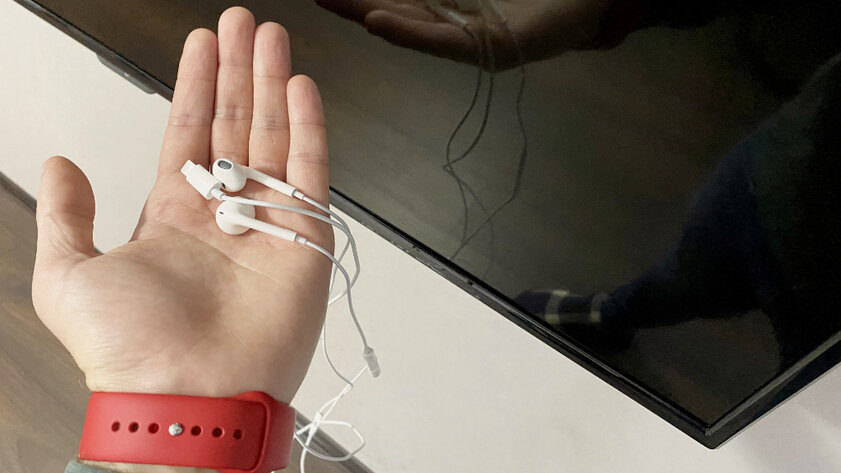 Occasionally I have breakfast in the living room, including some of the series (hello, Netflix) on the TV. I usually switch AirPods Pro to Apple TV so as not to wake anyone at home, and flip through regional and technology news on the iPad via an RSS reader. I laughed for a long time when I realized that I was planning to connect EarPods with a Lighthing cable to the TV. Morning, what to do. However, at this point, I clearly formulated the first problem of wired headphones, which I had not thought about before. Yesterday I thought that the same TWS are cool because you don’t get confused in the “laces”. However, the distance from the source at which you can use wireless headphones is much more important. As I write these words, this moment already seems obvious. But still.

Listening to music while walking down the street 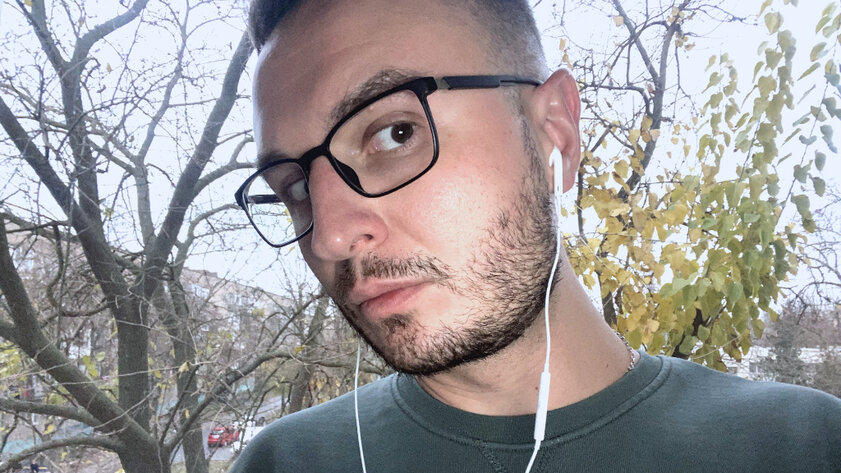 I only have one own parking space in my yard. It now houses the second car, which is currently being actively sold. The main “tractor” (hello to everyone who loves the sound of the N20 engine from BMW) periodically spends the night in a covered parking 10-15 minutes from home. I put my EarPods into my ears, charged the radio on Netsky via Apple Music, threw a portable office in a leather backpack over my shoulders and went, cheering myself up with a selected “drama”. Strange, but today it no longer seems to me that wired headphones somehow interfere with movement. Once it was customary to hide them under clothes, and then it is really not so comfortable with them. If they dangle from above and hide in a pocket as unnecessary, there is nothing like that. 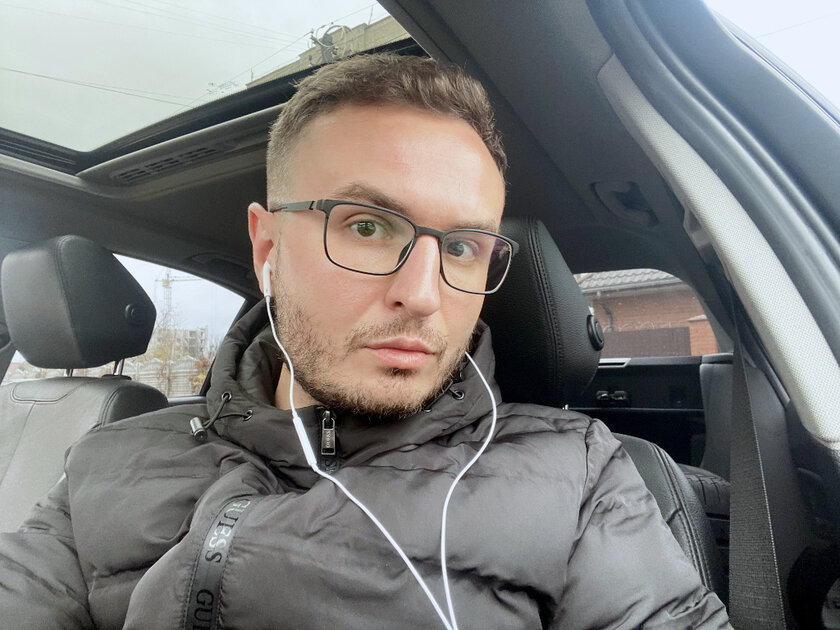 Today, the first thing to do was to pick up summer tires, which I left in the car wash for cleaning and processing with a special compound so that they deteriorate less during storage. If you look closely, they are visible in the background – lying on the unfolded seats, because they do not fit in the trunk of a compact sedan. While loading the wheels, I took a couple of voice calls and made a couple of conclusions. For the role of a headset, any TWS, of course, are much better than wired headphones, because they have a microphone on each earbud, and they can be used one at a time. And before use, wired headphones need to be connected to a smartphone, while wireless ones are already in connection with it. In general, while driving, it’s easier to use a speakerphone, and not to look for a smartphone in one pocket, and “laces” in the other.

Listening to our podcasts while jogging 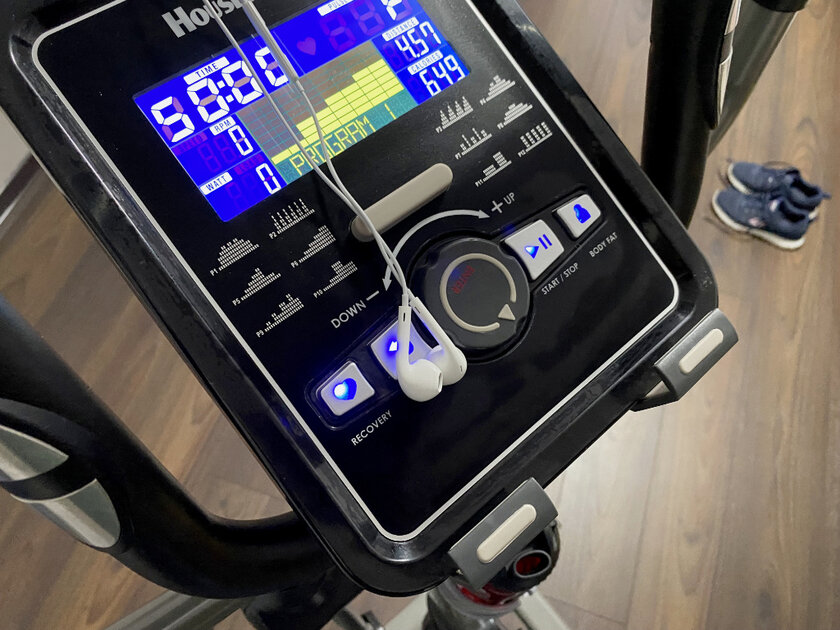 Instead of a lunch break, once every couple of days for about a month I regularly go to individual training. It’s a pity my mentor canceled the class today because of a cold (I hope so). So I went for a run on my home ellipsoid. I usually spend about 50 minutes on it – I never got to an hour, and I haven’t practiced for a long time. In order not to get bored, I loaded our podcast. To be honest, the simulator in the EarPods is much more comfortable for me than in the AirPods Pro. Due to the intracanal structure, I have some kind of discomfort during active movement. As for the wires, they don’t get in much of the way. The only thing is, when they hit a part of the body or a simulator, the blow is transmitted a little to the ears. In all fairness, though, it’s not that annoying.

I use headphones while working in my office 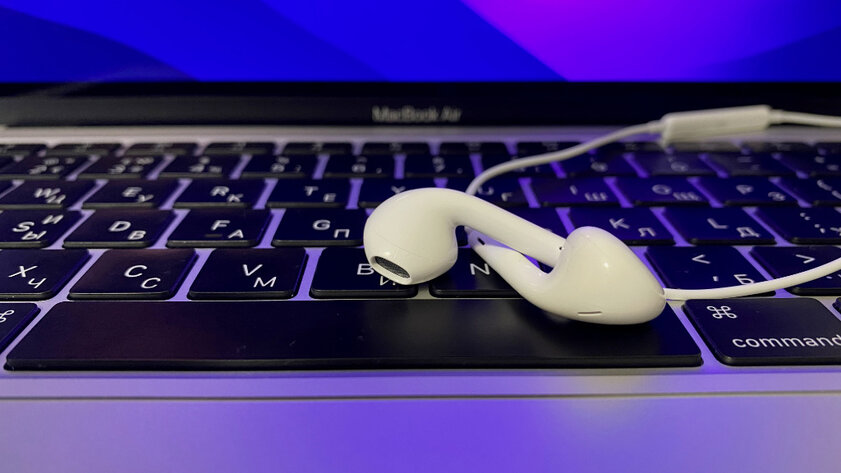 Not always, but from time to time I work to music. I distribute instructions to employees mainly in text – even to those who are with me in the same office. Actually, therefore, there is no problem to constantly be in the earbuds. There were no phone calls in the working mode today, but I listened to music actively. The only thing I usually connect headphones to a MacBook is to switch tracks with multimedia keys directly from it. But I have EarPods with Lighthing cable, so I had to connect them with my iPhone and uncover Spotify. Through it, you can remotely switch tracks from any gadget, regardless of where the headphones are inserted. However, this is a special case.

Snack at a nearby cafe along with a YouTube video 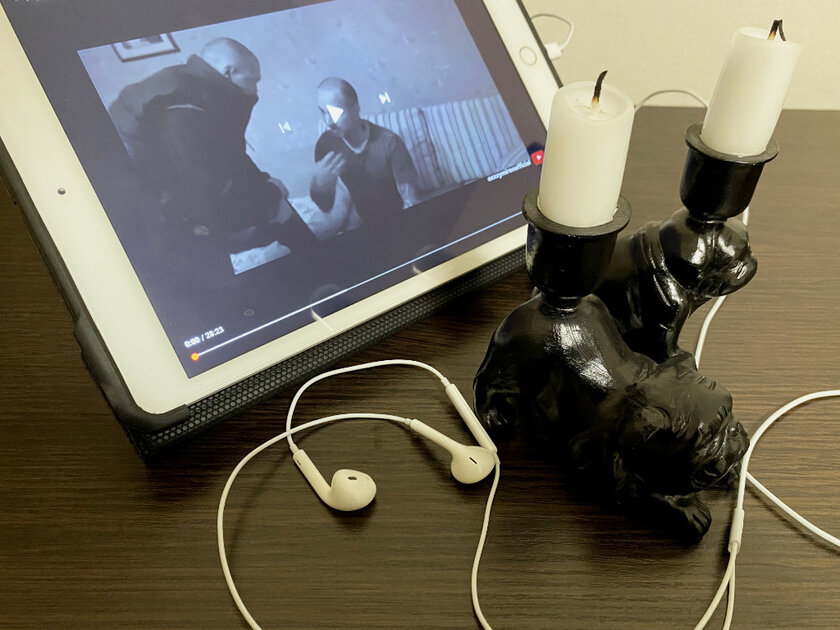 For a change of scenery and a little snack, I took a break at a cafe next door. There are interesting dog-shaped candlesticks on every table and edible tuna sandwiches. I took my headphones and iPad with me. In this scenario, the wires were really superfluous – only tangled in them. I tried to watch the video on YouTube, which I started in the morning, but nothing good came of it. At this stage, I have just formed the main conclusion of this small experiment lasting only one day. Wired headphones are really not as versatile and comfortable, but it was clear right away. Another thing is interesting.

In summary: when wired headphones are still the norm

In the end, I came to the conclusion that wired headphones are really convenient only when connected to a small source that is nearby, for example, to a smartphone. In any other scenario, wireless earbuds are much more convenient – especially TWS. As a result, I realized that it was this format that really expanded the number of gadgets to which you can connect headphones. Several years ago, I did not even have a thought to use the same TV with in-ear or overhead models – the distance to the source was too great. In general, if you still have a wired connection, rather get rid of it. Get a very different experience. I guarantee.

www.worldstockmarket.net/
- Advertisement -
Share
Facebook
Twitter
Pinterest
WhatsApp
Previous article
“It is unlikely that the micron will escape the protection of vaccines”, says immunologist
Next article
Turkey’s letter to UN against Greece: ‘Militarization’, ‘maximization’ and the whole revision agenda