Remain vulnerable to extending the fall 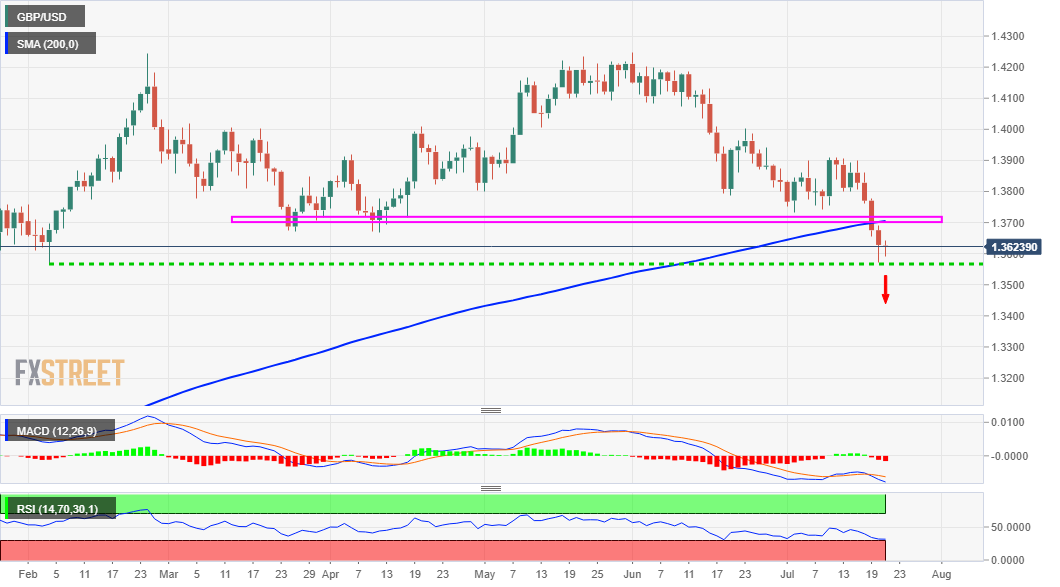 The GBP / USD pair has once again shown some resilience below the 1.3600 level and has quickly recovered around 40-50 pips from the daily lows. The pair has risen again near the upper end of its daily range, although it has lacked any continuation buying. At the time of writing, it remains negative on the day around the 1.3615 level.

A tone of positive risk appetite, as represented by a continuing strong rally in equity markets, has sparked some profit-taking around the safe-haven US dollar. This, in turn, has been seen as a key factor that has provided some support for the GBP / USD pair. That being said, the deadlock over the Northern Ireland Protocol to the Brexit deal, coupled with the resurgence of COVID-19 infections in the UK, has acted as a headwind for the British pound and limited gains from the British pound. pair.

From a technical perspective, the GBP / USD pair has found acceptance below the very important 200-day SMA for the first time since July 2020 and appears vulnerable to further decline. However, the pair has managed to find some support just before the February 2021 low on Tuesday. This, coupled with the fact that RSI on the daily chart has moved close to oversold territory, warrants some caution for aggressive bears.

Therefore, it will be wise to wait for some consolidation or a modest bounce before positioning for any further bearish movement. In the meantime, any recovery attempt could be seen as a selling opportunity and risks ending quite quickly near the 1.3700 level. This coincides with the break point of the 200 day SMA support and should now act as a key point and help determine the next directional move for the GBP / USD pair.

On the other hand, the 1.3570-60 region appears to have emerged as immediate support. A convincing breakout from this region will be seen as a new trigger for the bears and could spark some technical selling. The GBP / USD pair could accelerate the slide towards the key psychological level of 1.3500. Further down, the downward move could extend towards the next relevant support near the horizontal zone of 1.3450-30.

Unbreakable smartphone with a 15 600 mAh battery, NFC and a weight of almost 500 g: presented by Oukitel WP15

USD / CAD stabilizes around 1.2550, seems to close for the third day in a row higher