Russia and China formally reunited with a red and white road bridge: Pictures from the impressive inauguration 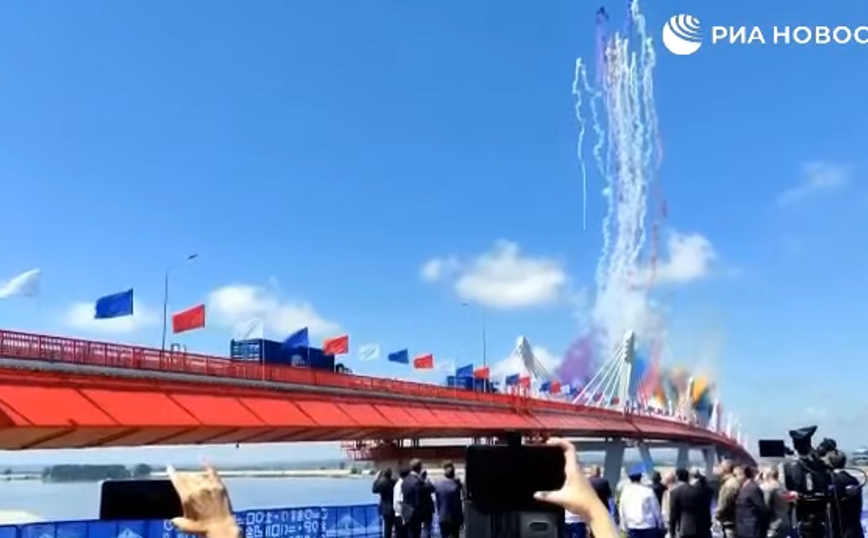 Russia and China they are now officially united. The two countries are connected by a road bridge which stretches over the Amur River connecting the cities of Heiche (Heilongjiang Province) and Blagovestchensk (Russian Far East).

The construction of the bridge, which is the first to connect the two countries, was completed two years ago, but its inauguration had been postponed due to the coronavirus pandemic. The launch of this long-term plan, for which the first agreement dates back to 1995, symbolizes the rapprochement and increased trade between the two countries.

Russia’s state-run Ria Novosti news agency has released a video of the opening of the red and white bridge, which shows the first trucks passing through amid fireworks.

The cost of the one-kilometer-long bridge and only two lanes cost, according to the Athens News Agency, about 19 billion rubles (300 million euros), of which 14 billion for the Russian side, according to official figures.

According to Russian media, this bridge is intended exclusively for the transport of goods. For the population of these two cities of about 200,000 inhabitants, a cross-border cable car is being built and the project is expected to be completed in 2023.

Moscow and Beijing, which have a 4,250-kilometer border, mainly on the Amur River, have been at loggerheads for more than 30 years over the demarcation of their borders in the region.

Trade flourished after the normalization of relations between the two giants in the late 1980s, but they always ran into the region due to the lack of transport infrastructure.

In recent years, a plant complex has been set up on the Russian side: a Gazprom plant, which has emerged as one of the most important gas processing plants in the world and a link in the Russian-Chinese Power of Siberia pipeline, as well as a Sibur petrochemical plant.

In April, the construction of a railway bridge over the Amur, connecting China and Russia, was completed in the Jewish Autonomous Region (Oblast) with its administrative center in Birobidzhan, 500 km to the east. It is expected to be commissioned in August, according to local authorities.