Russian forces are now inside the besieged southern city of Mariupol, a senior U.S. defense official said, according to the Guardian. Shortly before, it became known that Russian ships in the Sea of ​​Azov were bombing the city with cruise missiles.

The Ukrainian military has claimed that Russian forces have stockpiles of ammunition and foodstuffs that will last “no more than three days”.

U.S. and NATO officials say Belarus’s entry into Russia’s war in Ukraine is likely in the near future, when a CNN source said Belarussian forces were ready to invade Ukraine in the coming days, with thousands of troops preparing to deploy. in the neighboring country.

According to the UK Department of Defense, Russian forces appear to be “stuck” as Ukrainian forces “continue to repel” attempts to seize the besieged southern city of Mariupol.

At the same time, the announcement of the number of dead soldiers by the Russian side, made yesterday by the Komsomolskaya Pravda, is attributed to … hacking. The paper claimed that its website had been compromised following reports that 9,861 Russian soldiers had been killed and 16,153 wounded. The article was later removed and the newspaper issued a statement saying that “the site administrator interface was violated and a fake news story was published”. Nevertheless Russian BBC investigation has revealed that the Russian authorities are pushing in every way not to make public the deaths of Russian soldiers.

What is happening on Ukrainian soil

Beyond that, the Ukrainian territory and the Ukrainian people continue for the 27th day to endure the blows of the Russian army … at least those of them who did not leave the country in search of salvation.

Sirens sound throughout the day in the Kiev, Kharkiv, Nikolaev, Cherkasy, Ivano-Frankivsk and Lviv regions.

Makariv: The Ukrainian army claims that its forces have recaptured the city of Makariv, near Kyiv. In its latest update, the General Staff of the Armed Forces of Ukraine reported that its troops had repelled Russian forces from the city, about 60 kilometers west of the capital. The city may have been “cleansed”, but between it and Kyiv the Russians were seen by Maxar to have lined up and pitted against Ukrainian forces.

Kyiv: Photojournalist Max Levin has disappeared on March 13 between the village of Mosun and Huta Mezhirska just north of Kiev, where a fierce battle took place that day. He drove to Huta Mezhirska and drove with his camera in the direction of Mosun. The last message is at 11:23 a.m. A Russian artillery barrage in the northern Obolon district of Kiev has killed one person.

Borispil: The mayor of the Ukrainian city, which is located near the Borispil International Airport, east of Kiev, on Tuesday urged citizens to leave the city if they can because of the fighting that is taking place nearby.

Dnipro: The city of Lozova in the Dnipropetrovsk region was bombed twice today, and explosions were also reported in Pavlograd. Shortly after 7 pm Greek time, it became known that in Pavlograd, the target of the bombing was the Pavlohrad-2 railway station, which was completely destroyed.

Sumi: In Trostianets, between Sumy and Kharkiv, late on Tuesday night, fires broke out after clashes between the two armies and artillery bombardment.

Kharkiv: Nearly a thousand buildings have been destroyed in Kharkov due to Russian bombing, according to the state emergency service of Ukraine, according to the BBC. Kharkiv leader Oleh Syniehubov said the city had been bombed 84 times overnight. Russian forces have been bombing Kharkov, just 50 kilometers from the Russian border, for more than three weeks. At least 500 civilians have been killed in the city, according to Ukrainian officials.

Lugansk: In Sheverodonetsk, the Russians hit a children’s hospital with mortars. As a result, the hospital caught fire and seven children, including 15 adults, were forced to flee in a hurry. 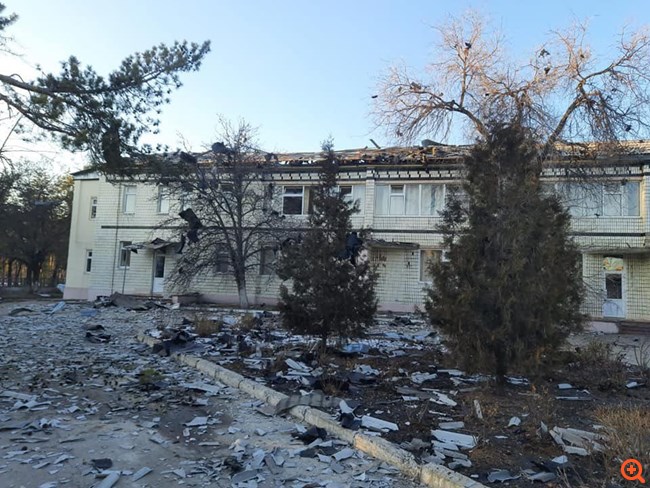 Donetsk: The town of Avdivka, very close to Donetsk in eastern Ukraine, was the target of a Russian attack last night that killed at least five people and injured 19, Human Rights Commissioner for the Ukrainian Parliament Lyudmila Denisova said today.

Mariupol: Russia began shelling the city of Mariupol from the Sea of ​​Azov, according to a senior U.S. defense official, using a group of about seven ships to launch attacks. The official said some of the ships may be minesweepers and some ships amphibious, but some of the ships are surface ships (cruisers, destroyers, frigates and corvettes) that took part in the attack on the besieged city in the last 24 hours. A little while later it became known that the Russian forces entered Mariupol.

Footage on telegram this evening shows what appears to be several cruise missile launches from a Russian ship in the Black Sea. pic.twitter.com/6DU5VNsGgQ

Hersonissos: Humanitarian catastrophe threatens 300,000 people in the Russian-occupied Ukrainian city of Kherson as food and medical supplies are depleted, while occupying forces barred civilians from heading to Ukraine.

Nikolaev: The Russians bombed a gas station with their artillery, killing three people and injuring a woman. The Ukrainian military is launching counterattacks that have made it possible, especially in the south, to retake territory occupied by Russian troops that is having difficulty communicating, a Pentagon spokesman said today.

The United Kingdom has sent more than 4,000 anti-tank missiles to the Ukrainian army to help “resist Russian aggression,” the Pentagon said in a statement.

In a series of tweets, the ministry states that the devices sent were NLAW (Next Generation Light Anti-Tank Weapons). The ministry also commented on a video it described as “Russian propaganda”. He appears to be referring to footage released by two Russian propagandists who asked UK Defense Secretary Ben Wallace about an alleged nuclear weapons program in Ukraine, which appeared to indicate that the UK was running out of anti-tank weapons.

More than 3.5 million refugees have now fled Ukraine, according to the latest update from the United Nations High Commissioner for Refugees (UNHCR). According to the report, 3,532,756 refugees have fled Ukraine since the start of the Russian invasion on February 24. In a separate update, the agency said it has increased supplies of thermal blankets, hot meals and tents along the Ukrainian border, with particular emphasis along the Polish side as temperatures plummet.

Russian forces forcibly deported 2,389 children from Donetsk and Lugansk, the Ukrainian Foreign Ministry said in a statement on Monday, calling the move a “gross violation of international law.” The Russian Defense Ministry announced on Sunday that 16,434 people, including 2,389 children, had left a day earlier, and that the people had left of their own free will. UNICEF commented on these latest reports on Tuesday and expressed concern, although it was not able to verify them independently.

Putin spoke by telephone with Macron. The sermon was composed on the initiative of the French story https://t.co/ixLZlnfAhV pic.twitter.com/wAz1tCrdUo

The conversation started in France, the state news agency Ria Novosti reported. The Interfax news agency reported that during the call, the two leaders discussed peace talks between Russia and Ukraine.

The Russians use supersonic missiles

Petropoulos: Turnover and profits in 2021 at historically high levels

Texas Massacre: Biden Outbreak – For God’s sake, when are we going to…

After school attack, Biden says US needs to deal with gun ban

Eduardo Domínguez, the Otomi model who posed for Gucci and breaks paradigms

Terry May 25, 2022 0
In order to break paradigms and stereotypes with which the world of fashion has governed us for many years, more…

May 25, 2022
The Ukrainian authorities say they have figures for a possible 20,000 war crimes three months after invaded the…

I wanted to drop out of school to do tiktoks; her father put her to…

May 25, 2022
Recently on TikTok, a video of a bricklayer who gave his daughter a life lesson after she told him that she…

May 25, 2022
Eighteen-year-old teenager opened fire yesterday Tuesday (24/5) inside the Robb Elementary School in Uwalde of…

May 25, 2022
North Korea fired three ballistic missiles off its east coast on Wednesday at local time, according to…
Prev Next 1 of 13,572
More Stories

War in Ukraine: Giving us heavy equipment is the best…

“It goes far beyond legislation”, says professor on the…

War in Ukraine: Conference on rebuilding the country…