The scientific Sarah Friedman announced on his Twitter account the recent discovery of specimens of the Crystallichthys cyclospilus that she and her team of scientists found during research in the Aleutian Islands of Alaska. These specimens are transparent, trypophobic-looking snailfish that live in the deep ocean and are very rare due to their appearance and habitat.

It is known that they can be located at depths of 100 or 200 meters, so it is very difficult for anyone to see them on any beach. Spotted snailfish have transparent bodies in reddish tones, which are like an adaptation mechanism. Being food for predators, they make use of their color to camouflage themselves among the light waves that pass through the water, and, in this way, they can go unnoticed. 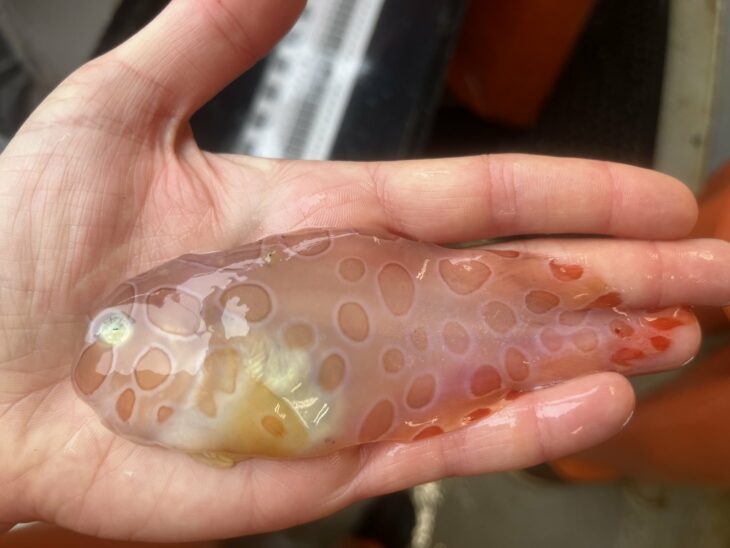 I’ve been waiting a long time to see one of these in person! Spotted snail fish!

During their investigation, in just two weeks they found four or five of these individuals while conducting a routine survey that the National Oceanic and Atmospheric Administration (NOAA) carries out every year on these islands.

Since everyone liked the snailfish so much, here’s another cool find from yesterday. Giant sea spider (Colossendeis sp.), a species of Pycnogonid pic.twitter.com/QcOaIhMNP7

The biologist also shared the finding of a giant sea spider or as it is known by its scientific name Colossendeis. These marine spiders can exceed 70 centimeters and can only be found in the polar seas, where extremely low temperatures are reached.