Serbia: EuroPride 2022 held with minor incidents and dozens of arrivals

The pride march, which is the culmination of the EuroPride 2022 week, went ahead as usual in Belgrade this evening despite a police ban. Thousands of members of Europe’s LGBTI communities marched through the city center and the march ended in a central park where an all-night party will take place. Politicians from the center-left parties of the Serbian opposition, dozens of members of the European Parliament and ambassadors of Western countries participated in the march as a sign of support. The Commissioner for Equality, Helena Daly, also arrived in the Serbian capital today, who met with the Prime Minister of Serbia, Ana Brnabic, and expressed to her the EU’s displeasure with the decision to ban the pride march.

From early this morning, thousands of police officers were deployed in central parts of the city to prevent those demonstrating against the pride march from approaching the LGBTI gathering point. 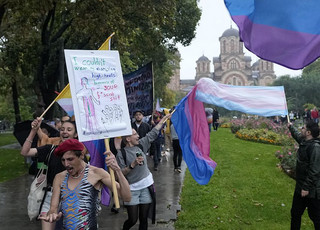 Sporadic incidents occurred in various parts of the city by far-right groups and extreme religious organizations, who tried to break the police cordon. Organized soccer fans also attacked the police, who had to use chemicals to repel them. The police, as announced, made dozens of arrests.

The main streets of the city of Belgrade will remain closed throughout the night and until all EuroPride events are completed.