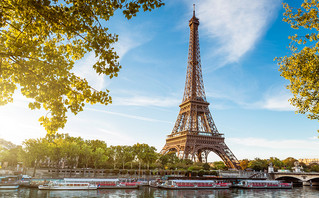 After being closed for 9 months due to the coronavirus pandemic, the longest period since World War II, the Eiffel Tower is going to open again today, at 12:45 local time for visitors.

Its elevators will operate again to transport tourists to the top of the 300-meter Tower, ending a long period of closure due to the Covid-19 pandemic.

With a limit on the maximum number of visitors allowed, the most famous attraction of the City of Light, as broadcast by the Athens News Agency, will be able to receive 13,000 people a day, almost half the number of visitors than usual, in order to comply with the rules of social distance.

In fact, from next Wednesday visitors will need to show a vaccination certificate or a negative covid test result thus keeping pace with recent measures imposed by the government.

“Obviously it is an additional operational complication, but it is manageable,” Jean-François Marten, head of the management company Sete, told AFP.

After a final round of security checks by staff, Marten announced that “the lady is ready.”

And where will the visitors; From the 1st of June when the pre-sale of tickets started and until the end of August 70,000 tickets have been sold, mostly for the second fortnight of July.

Online bookings allow the first trends to be observed: half of the visitors are expected to be French, Italians and Spaniards are estimated to be more than usual, only 15% of bookings are from Americans, very few bookings are made from Asia , while “almost no bookings” have been made by the British.

The closure of the Tower for many months caused chaos in the finances of Sete, which manages the monument on behalf of the Paris authorities.

The company is expected to request an additional financial subsidy from the government and a recapitalization of 60 million euros in order to survive having seen its revenues fall by 75% to 25 million euros in 2020.

The masterpiece of the architect Gustavo Eiffel has also encountered problems related to the last time it was painted, the 20th time it has been re-painted since it was built in 1889.

Work was suspended in February due to high levels of lead detected at the site, which poses a risk to workers’ health.

Checks are underway and painting is expected to resume in the fall, which means part of the façade is covered with scaffolding and safety nets.

3 things to watch in streaming on the weekend: The Flight Attendant, Atypical 4 and Loki

Germany devastated by floods. Experts: “A dangerous threshold has been crossed”