The ‘fake’ Russian robot dogs and the real armed robots

One of the “surprise stars” that appeared at the Russian trade show Army-22 was the robot dog carrying an anti-tank RPG-26.

However, Twitter users quickly spotted that the ninja outfit he was in “disguise” was trying to hide a Go-1 robot manufactured by the Chinese company Unitree, and the armed robot dog was branded “fake”. But, things are a bit more complicated.

A robot dog with a grenade launcher has been demonstrated to a Sputnik correspondent at the Army-2022 military forum. The M-81 robotic system is capable of precisely shooting as well as transporting weapons. The “dog” can also designate targets and conduct patrol missions. pic.twitter.com/2PyvXotEhz

First, the Russian makers of the M-81 robot do not deny that they use Chinese hardware, although they hope to develop a Russian version. The St. Petersburg-based company Machine Intellect claims that robot dogs could be used to carry supplies, as scouts and even to carry out aggressive actions.

So, firstly, we have a company that adapts a commercially available robot hardware, giving it a different role, and we can consider that the result is not a fake, but a weapon standing on the battlefield.

But there is also the opposite.

Machine Intellect does not appear to have an online presence. In fact, the only reference to it on the internet, other than its presence at the Army-22 exhibition, is a promotional video posted in July titled “Robot Dog Hunt” that shows the same robot dog chasing two supposed soldiers in a forest . The company does not disclose its track record in general, or its track record in this particular industry.

The independent Russian newspaper “The Insider” notes that Intellect Machines was registered as a company only in April 2022, with a legal address in a residence. They report that the CEO, Alexey Aristov, “previously served as a director and head of companies that were placed in liquidation by the tax service, and are no longer active.”

This story is very similar to the case of the Russian Orlan-10 drones. It turned out that Russian suppliers were buying cheap Chinese electronic systems and then reselling them to the Russian military at “inflated” prices.

“There is no doubt that someone pocketed 446 million rubles,” concluded an investigation into the case published in 2021. 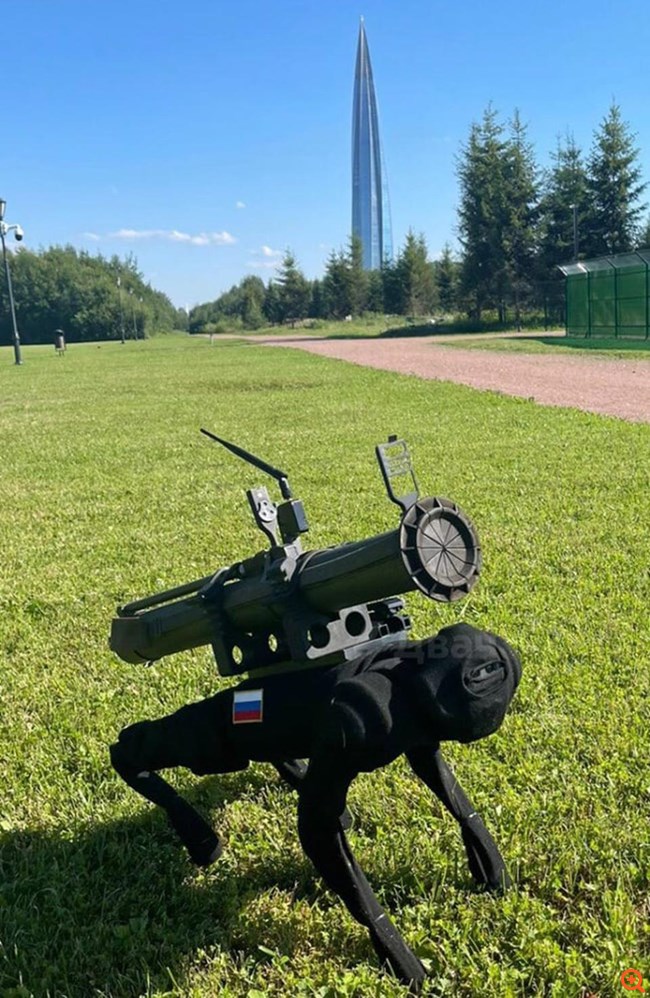 So the robot dog with the rockets is not so much reminiscent of Russia seeking to impress the world with its advanced technology, as of the Russia of “equipment contractors” indulging in their favorite sport: convincing the military to pay exorbitant sums for technology is already on the market.

However, there is also a more serious issue. The war in Ukraine has seen the widespread use of drone bombers, commercial quadcopters that have been “hacked” to drop improvised grenade munitions. In fact, Ukraine has made effective use of this type of technology with its drone operators demonstrating exceptional skill in dropping grenades through open tank hatches or into trenches. In addition, they use drones as roving munitions, capable of striking through open windows and doors.

The question was partially answered – via the YouTube channel “I Did A Thing” – by Alex Apollonov, in an episode where he adapted a rifle to a Unitree robot dog. The gun was placed high above the robot’s center of gravity, which caused a lot of trouble for the robot dog, as it fell down after every recoil.

“The robot dog can’t handle the weapon and ends up crumpled to the ground,” notes Apollonov.

The weapon proves highly inaccurate even at very short range, and Apollonov suggests that this modification is impractical. Of course, the video test may have been staged more for comedic effect than to seriously examine the weapon’s effectiveness. Each burst will be erratic and create strong recoil – hence the rough modification seems dysfunctional.

A more serious attempt – of the same philosophy – was made by Americans: a Sword Defense rifle with a caliber of 6.5 mm was adapted to a robot dog from Ghost Robotics and the result is said to be accurate in its targets even at a distance of several hundred meters.

In any case, a recoilless rocket launcher will cause fewer problems on a light platform. Nammo recently showed the M-72 launcher (weighing seven kilograms) firing test shots from a small drone – by analogy, the action of an anti-tank adapted to a robot dog might not be such a difficult task.

Unlike drones, a robot dog can be propelled into an ambush position and remain there for several hours while its handler is at a distance. Four-legged robots – such as Boston Dynamics’ Spot, Ghost Robotics’ systems currently being tested by the US military, etc. – are preferred over wheeled or crawler vehicles due to their ability to move in difficult terrain, but the Chinese version is probably the most affordable.

In the near future, robot dogs with custom rocket launchers may well appear on the battlefield. But don’t expect Russia to be the frontrunner. Considering the skills the Ukrainians have demonstrated in using drones, it is more likely that they will be the first to use them against the invaders.

* How the Ukrainians hit the Russian military airport in Crimea

EUR/JPY Price Analysis: Further rally could lead to a revisit of 2022 highs